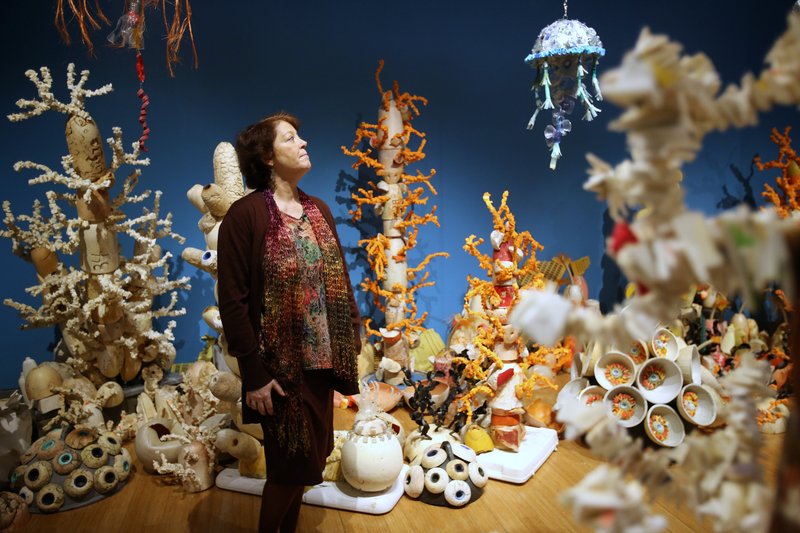 Angela Haseltine Pozzi, creator of the Washed Ashore project, pauses in a coral reef made of trash, the first walk-through reef exhibit by the project. The exhibit, which illustrates the magnitude of ocean pollution, is on display at the Clinton Presidential Center. Photo by Thomas Metthe, Arkansas Democrat-Gazette

There's a colorful fish on the wall. It's fun. It's whimsical, made out of flip-flops and the pieces leftover when they were cut out of a sheet of plastic foam. But wait. Are those bite marks?

Some plastic looks like food to sea creatures, and Flip Flop Fish and its companion, Fish Bite Fish, are very visible evidence.

Artist Angela Haseltine Pozzi, creator of the fish sculpture, says, "I used to have people say, 'How do you know they're eating it?' I go, 'You just tell me. What do you think?'"

The fish are just two of the residents of "Washed Ashore: Art to Save the Sea," the newest exhibit at the Clinton Presidential Center, on display through October. The exhibit is one of several traveling the country thanks to the nonprofit Washed Ashore.

Plastics are durable. Too durable. It takes centuries for them to begin to decompose. So the more water bottles, grocery bags and flip-flops humans use and discard, the more pack landfills — or end up in the world's oceans and wash up on the beaches.

Pozzi, founder and artistic director of Washed Ashore, says, "We're such great innovators, us humans. We're able to do amazing things. But the problem is, we forgot it lasts forever, which was great, but now, it's lasting forever and it's piling up. It's time to start using that innovation to create new products that are not harmful to the earth."

Washed Ashore is an Oregon-based nonprofit that collects debris from Oregon's beaches and converts it into creative sculptures meant to draw attention to the problem of plastic pollution in the ocean. The pieces are whimsical, colorful and playful at first glance. Look closer and there's something profound — like the bite marks on the fishy flip flops. 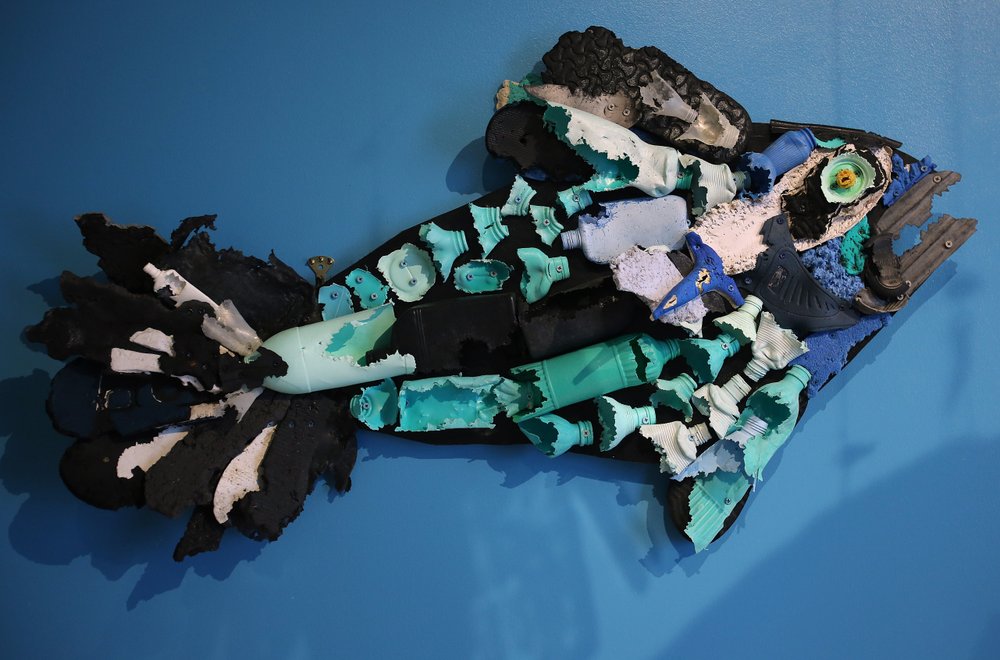 All the plastic pieces in Fish Bite Fish bear the teeth marks of marine life that mistook the plastic for food. Photo by Thomas Metthe, Arkansas Democrat-Gazette

Even in landlocked Arkansas, individuals' decisions and actions (or inactions) make a big difference, organizers say. The Arkansas River and its tributaries flow down to the Gulf of Mexico, taking water-disposed garbage with them.

Rebecca Tennille, spokesman for the Clinton Center, says, "The Arkansas River, all you have to do is walk along the banks and see the same thing."

"Those will travel from Arkansas to the ocean," Washed Ashore Executive Director John Tannous adds.

It's not merely about litter.

Pozzi says, "Every time you pick something off the shelf, you're saying, 'I want more of that. Please replace it.' If you choose something biodegradable, you're voting for more biodegradable products."

The Clinton Foundation's communications manager, Ben Thielemier, says, "The take-away message for us is that every action counts. We are the cause of all these sculptures. [Plastic] may be a benefit to us, but we have to be mindful of the things that are easy. They can have a lot of unintended consequences."

It all started, in a way, with a walk on a beach that was just a little too colorful.

Oregon native Pozzi spent her summers on the coast, walking the beaches and watching the waves. When she saw garbage, she assumed people had littered.

"Over the years, I noticed sometimes there was plastic. At first it was cool, like, 'Wow, something from Japan!'"

Seeking healing and a sense of purpose after her husband's death from a brain tumor, Pozzi moved from her inland home to the seaside town of Bandon in southern Oregon.

One day, she saw what she calls a "mosaic of plastic garbage" — bits of all colors, strewn on the beach as far as she could see.

"I was literally sick to my stomach. This is a sacred place. We can't do this to my favorite place. Everyone loves the ocean. What are we doing?"

She didn't know much about marine debris, and so she started to research, reading about the millions of tons of plastic dumped in the oceans, scattered on the beaches, filling the bellies of marine creatures.

It was the push she needed and the purpose she'd been seeking: to find a way to help clean up the oceans and their coastlines.

Since she'd been a teacher for 30 years, she took an approach that incorporated art and used her skills and savvy as an educator.

"[People] have to want to learn," she explains. "This is a very depressing topic. So you don't want to ram depressing things down people's throats. You won't get a good reaction out of it."

She started a workshop, helping volunteers learn how to turn ocean garbage into art. After six months, they had made 13 sculptures, and the first exhibit began to travel.

That was 2010. Since then, Washed Ashore has grown to more than 70 sculptures, four traveling exhibits and a full staff including additional artists. They estimate that 25 million people have seen the pieces and, currently, there are pieces at Walt Disney World and at the Smithsonian National Museum of Natural History. 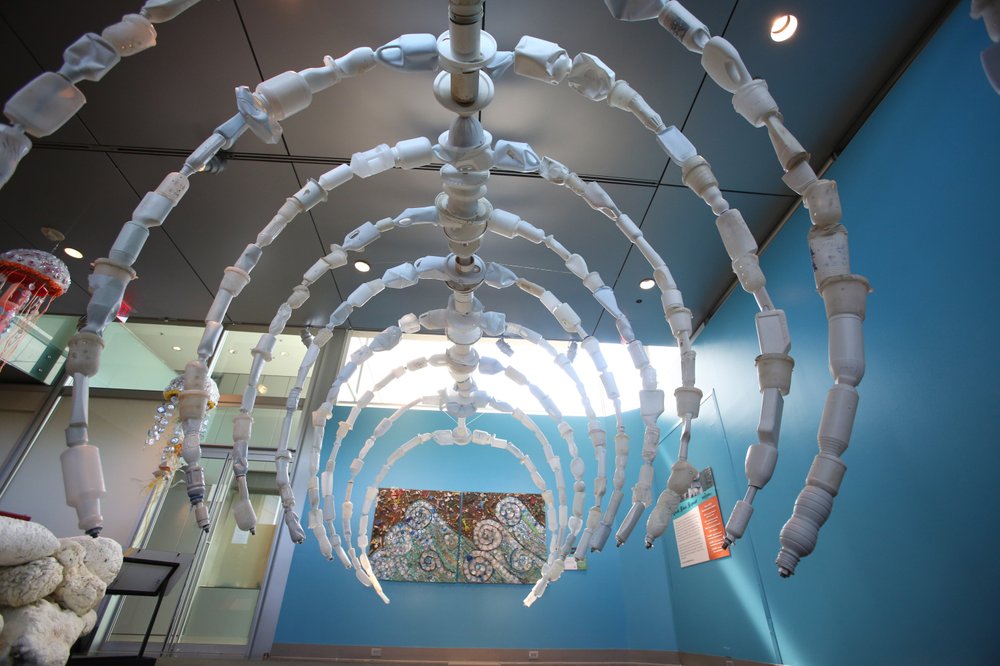 A giant whale rib cage made of white plastic jugs gives visitors an idea of just how large the creatures are in “Washed Ashore: Art to Save the Sea” at the Clinton Presidential Center. Photo by Thomas Metthe, Arkansas Democrat-Gazette

GARBAGE IN, ART OUT

The exhibit at the Clinton Center takes over two rooms. On the first floor is the hands-on room. Visitors can walk through a giant whale's rib cage, constructed of white plastic bottles.

Visitors are also welcome to walk through the "tentacles" of giant "jellyfish." Called "jellies," they're made primarily of water bottles, from neck to base.

"Like the good hunter, we use every little part," Pozzi says.

There's a "plastic tribe" of colorful masks made from plastic jugs, tennis balls, bottle tops and odds and ends and, on the walls, murals made from even more colorful garbage.

Then there's what's sure to be a favorite with children: a plastic foam drum set that gives very satisfyingly loud thumps and bangs. Pozzi explains that the ocean pulls plastic down and that condenses the foam. The different pieces have different tonalities depending on how deep they were pulled beneath the surface.

Upstairs is the hands-free zone and a first for Washed Ashore: a walk-through depiction of a coral reef in its different stages, titled Reef at Risk. The display shows all stages of the reef's life and death, side by side.

Along one wall is a bleached "coral reef,'' made entirely of ocean-rolled plastic foam, molded and wired together to look like coral. It stands in a stark contrast to the "living reef'' just a few feet away. There, colorful buoys and the colored foam inside, old plastic bottles and jugs, sand buckets and other very recognizable bits and pieces imitate coral, sea plants and other creatures, making for a vibrant study.

Just beyond, there's a "reef in transition,'' parts of it bleached and dying, other parts still teeming with life.

And throughout, signs tell the story of the sculptures, what they're made of and how people might be able to do their own part.

It's hard to believe that every bit of what is seen is garbage. None of it painted. Just cut, molded, crumpled or strung together to make these fantastical creations.

And every bit of it came from the Oregon coastline.

"We could do Washed Ashore in any country," Pozzi says. "We live on a coast that's not known to be polluted. The Oregon coast is a beautiful, scenic treasure. But we get a regular influx from the Asian currents." 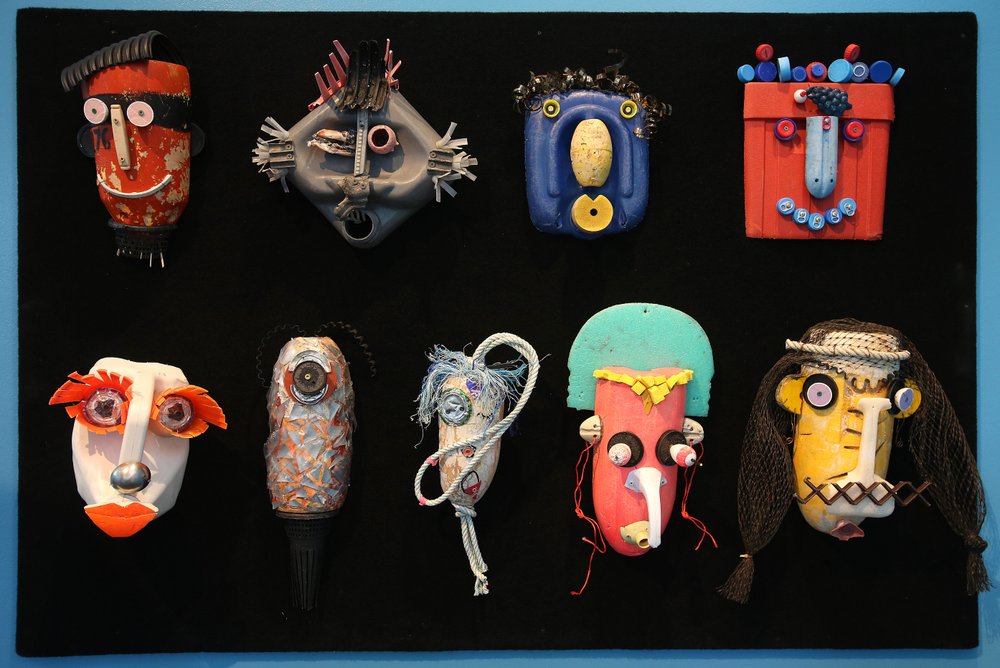 Plastic jugs, tennis balls and other odds and ends were used to make Plastic Tribe, one piece of “Washed Ashore: Art to Save the Sea,” on display at the Clinton Presidential Center. Photo by Thomas Metthe, Arkansas Democrat-Gazette

ONE PIECE AT A TIME

In June, more large sculptures will arrive at Clinton Center including Greta the Great White Shark and Stella the Seahorse.

Over the nine years of its life, Washed Ashore has processed about 22 tons of garbage, and 95% of it ends up in the sculptures.

"We get just enough of everything we need," Pozzi says. "We never have to worry about not getting it."

Pozzi is the designer, and she works on most of the pieces, but it's not all just her work. There's still the workshop in Bandon where people are welcome to sign up or drop by and help string foam pieces into "kebabs" or thread water-bottle bottoms. All tasks are broken down into difficulty levels, some so simple a small child can do them.

The idea behind the community hands-on approach is, Pozzi explains, to "give everyone a chance to participate and help make it possible. That gives people hope. They feel like they're part of the movement. Part of the solution."

"If everybody working together can make great things happen, then maybe we can prove that that's a way we can move forward."

Everyone pitching in is how the problem began in the first place, as Tannous notes.

"Someone didn't magically dump billions of tons in the ocean. It started with one plastic piece at a time. So, to reverse it, you just have to do the same thing."

While volunteers don't get to take their works home with them, they can walk away with the knowledge they've contributed to a bigger project, one that's traveling the country.

Pozzi says it's unusual in the art world for an artist to collaborate in this way. It's also unusual to have so little control over the materials. The artists have to work with whatever they get. But she loves the teamwork and the challenge.

Not everyone can get to the Oregon studio to help make jellies or coral reefs. But Pozzi and the Clinton Center team hope that the exhibit will inspire people to think about the role they play in the problem and how they can be part of the solution: Use reusable water bottles. Carry reusable bags when shopping. Recycle plastic instead of tossing it out the window or over the side of the boat.

But true to her teacher's roots and her own belief in emphasizing the positive, her message is not one of finger-pointing and gloom. It's encouragement.

"Don't beat yourself up over it. You have to be patient. As an adult, to change your habits is very hard. It takes a while."

There will be some special programs and activities during the exhibit's run, including a summer film series. And the new sculptures will arrive June 7, just in time for World Oceans Day on June 8.

For Pozzi and her crew, the message is, ultimately, always one of hope.

"People feel if there's no hope, they'll just give up. ... I believe that everybody working together makes big things happen. That's how you solve lots of problems."

“Washed Ashore: Art to Save the Sea”