Report: Iran to pull back from nuke deal 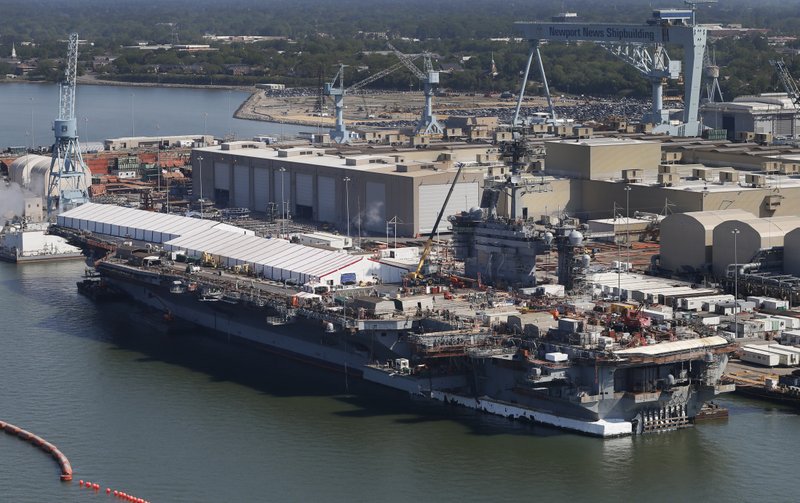 This April 27, 2016, file photo, shows the nuclear powered aircraft carrier USS Abraham Lincoln at Newport News Shipbuilding in Newport News, Va. The U.S. is dispatching the USS Abraham Lincoln and other military resources to the Middle East following "clear indications" that Iran and its proxy forces were preparing to possibly attack U.S. forces in the region, according to a defense official on May 5, 2019. (AP Photo/Steve Helber, File)

TEHRAN, Iran -- Iran today will announce it is partially withdrawing from the nuclear deal it struck with world powers, its state-run news agency reported, a year to the day after President Donald Trump pulled America from the accord.

The terms of the withdrawal remain unclear, though the Islamic Republic News Agency said President Hassan Rouhani will explain Iran's decision in letters to leaders of Britain, France and Germany that will be handed to ambassadors in Tehran. Iranian Foreign Minister Mohammad Javad Zarif separately will write to the European Union, the agency said.

The semiofficial Iranian Students' News Agency reported late Tuesday that Zarif had left for Moscow to meet with Russian leader Vladimir Putin to discuss bilateral and international issues, without elaborating.

Details of the letters, all to signers of the 2015 accord, will not be publicly disclosed, it said.

Officials in the Islamic Republic previously warned that Iran might increase its uranium enrichment, potentially pulling away from a deal it has sought to salvage for months. Already, the White House has announced the deployment of a U.S. aircraft carrier and a bomber wing to the Persian Gulf over unspecified threats from Iran.

Meanwhile, U.S. Secretary of State Mike Pompeo made a visit to Baghdad on Tuesday to show U.S. support for the Iraqi government as Washington steps up warnings to Iran against any action against American interests in the Middle East.

The unannounced trip began and ended after nightfall and under heavy security.

On the way to Baghdad, Pompeo told reporters that he would meet with Iraq's president and prime minister to show them what he said is U.S. support for "a sovereign, independent" Iraq, free from the influence of neighboring Iran. He said he would also discuss with them unfinished business deals that he said would allow Iraq to wean itself from dependence on Iranian energy.

Pompeo would not be specific about the more recent threat information involving Iran, but he said he would make the point in his meetings in Baghdad that any attack by Iran or its proxies on American forces in Iraq would affect the Iraqi government, too.

The "campaign to continue to prevent [Islamic State] terror inside of Iraq itself is something that's very central ... to the Iraqi government," Pompeo said.

The United Nations' nuclear watchdog says Iran has continued to comply with the terms of the 2015 nuclear deal, which saw it limit its enrichment of uranium in exchange for the lifting of economic sanctions. But American sanctions have wreaked havoc on Iran's already-anemic economy, while promised help from European partners in the deal hasn't alleviated the pain.

Trump campaigned on a promise to tear up the deal struck by his predecessor, Barack Obama. Trump had criticized the Iran nuclear deal for failing to address Tehran's ballistic missile program and what he described as its malign influence across the rest of the Middle East.

A statement Sunday night from U.S. national security adviser John Bolton said the USS Abraham Lincoln, other ships in the carrier's strike group and a bomber wing would deploy to the Middle East. Bolton blamed "a number of troubling and escalatory indications and warnings," without elaborating.

An American official on Tuesday said the decision to send the ships was based in part on intelligence indications that Iran had moved short-range ballistic missiles by boat in waters off its shores.

The movement, first reported by CNN, was among a series of recent indications that Iran might be considering or preparing to attack U.S. forces in the region, said the official, who spoke on condition of anonymity in order to discuss sensitive intelligence.

The official said it was not clear whether the boats with missiles represented a new military capability that could be used against U.S. forces or were only being moved to shore locations.

Information for this article was contributed by Zeina Karam, Robert Burns, Matthew Lee and Philip Issa of The Associated Press.

Print Headline: Report: Iran to pull back from nuke deal