Arkansas governor reveals 3 appointments, 2 of them to new judgeships 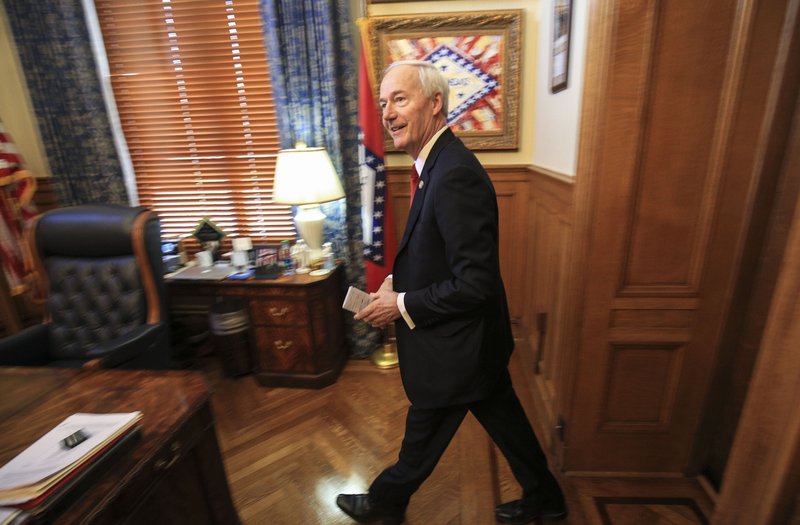 Gov. Asa Hutchinson is in his office at the state Capitol in this file photo.

Gov. Asa Hutchinson on Wednesday announced appointments to two new judgeships created by the Legislature earlier this year, as well as an appointment to a third post opened up by a departing judge.

In Fort Smith, the governor appointed Gunner DeLay, a district court judge and former Republican lawmaker, to serve on a newly created circuit judgeship for the 12th Judicial Circuit.

DeLay, 55, served in the Arkansas House of Representatives from 1995 to 1999 and in the Arkansas Senate from 1999 to 2003. He was later appointed by then-Gov. Mike Huckabee to serve as a prosecuting attorney in Sebastian County, and by Hutchinson to serve as a district court judge, according to a news release from the governor's office.

In Cedarville in Crawford County, Hutchinson appointed Marc McCune to serve on a newly created circuit judgeship in the 21st Judicial Circuit.

McCune, 51, formerly served as a prosecutor for the judicial circuit and as a member of the Arkansas Sentencing Commission.

The positions to which DeLay and McCune were appointed were both created by lawmakers through Act 1003 of 2019. The law created five new judgeships, based on a court-expansion plan that was put forward by the Arkansas Judicial Council last year.

The law called for the governor to appoint temporary circuit judges to serve in the 12th and 21st judicial circuits, which together cover Sebastian and Crawford counties. DeLay and McCune were appointed to serve starting July 1, with their appointments ending Dec. 31, 2020.

The remaining circuit judgeships created by lawmakers this year will be filled during the March 2020 nonpartisan judicial election.

In a statement, Hutchinson thanked each of the appointees while highlighting praise for their resumes.

"Throughout their careers, each has demonstrated a thorough understanding of the law and the skill and integrity to uphold justice in even the most complex of legal issues," Hutchinson said.