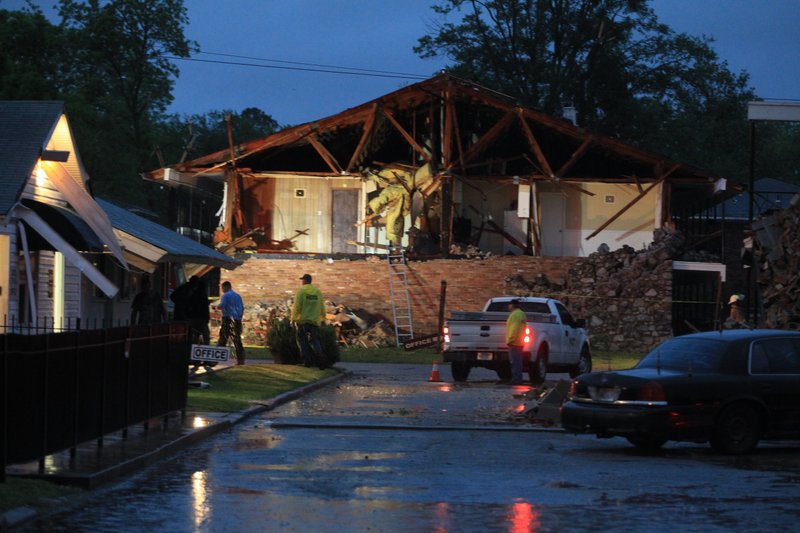 First responders at the scene of Myranda's Place Apartments in Pine Bluff after a severe storm damaged the 120 unit complex, forcing the evacuation of an estimated 150 residents.

PINE BLUFF -- An estimated 150 Pine Bluff residents were displaced Wednesday night after a violent storm toppled trees and ripped the roof off the Myranda's Place Apartments just before 6:30 p.m.

"One of those is probably going to be pretty severe," Sergeant said. "Three others walked out of the scene, and we may have had one who was having chest pains."

Emergency workers from Pine Bluff, Jefferson County, White Hall and surrounding areas converged on the scene to assist in the rescue efforts and spent more than an hour working to free people who were trapped in the wreckage. A roof was blown off one apartment unit, a wall collapsed at another, trees were down all over the property, and the smell of gas hung in the air.

By 8 p.m., fire crews had roped off the property and evacuated everyone from the complex.

"There's a lot of damage," said Pine Bluff Fire Chief Shauwn Howell. "A lot of residents were taken to the convention center. The Red Cross and Salvation Army are here, so it's a collective effort. All the law enforcement, utility companies, other fire departments, everybody chipped in and helped out, and that's what it's all about. Teamwork."

Mayor Shirley Washington was at the Pine Bluff Convention Center helping to coordinate efforts and was trying to get a count of the number of people taken in for shelter.

"At my last count, there were 61 people, but some of them left," Washington said. "There were about 90 that had not come here by the time I got here, but I understand quite a few of those were brought here and picked up outside by family members."

Carla Jackson, a resident of Myranda's Place, said that when the storm blew in, everything happened very quickly.

Kellie Williams, another resident, said that one moment everything was normal, and then the storm blew in.

"I was sitting there watching TV and everything just went out," she said.

National Weather Service surveyors intend to investigate the cause of the damage in Pine Bluff today, meteorologist Jeff Hood said. As of Wednesday evening, Hood said, it was not clear what kind of wind damaged the buildings.

"It's going to take some looking around to really understand if this was straight-line winds or a tornado," Hood said.

Hood did say that there was no indication of a tornado on radar at the time of the storm. He said a severe-thunderstorm warning was issued for Pine Bluff and areas east of the line of storms. That warning expired at 7 p.m., he said.

Wednesday's weather also dropped 2 to 3 inches of rain across much of southeast and central Arkansas, and Hood said the National Weather Service received multiple reports of flooded roads and barricaded areas across the southern portion of the state. There were no reports of high-impact flooding as of 8 p.m. Wednesday.

Entergy's online map showed approximately 6,000 residents were without power as of 8:30 p.m. Wednesday, with the power failures focused in Jefferson, Union and Faulkner counties. As of late Wednesday, all of south and central Arkansas was under a flash-flood watch or warning that was forecast to end as of 7 a.m. today.

Hood said the storm system that wound through Arkansas on Wednesday was only the "first round" of a series of storms and severe weather that will cross the state in the coming days.

More storm systems were predicted for late Wednesday evening, this afternoon and tonight. Hood said the storms have a high potential of becoming strong or severe and that they will likely drop 2 to 3 more inches of rain in the southern and central portions of Arkansas as a cold front sweeps across the state.

Most of the rain should clear Arkansas by Sunday, Hood said, but another round of spring storms will follow a few dry days early next week.