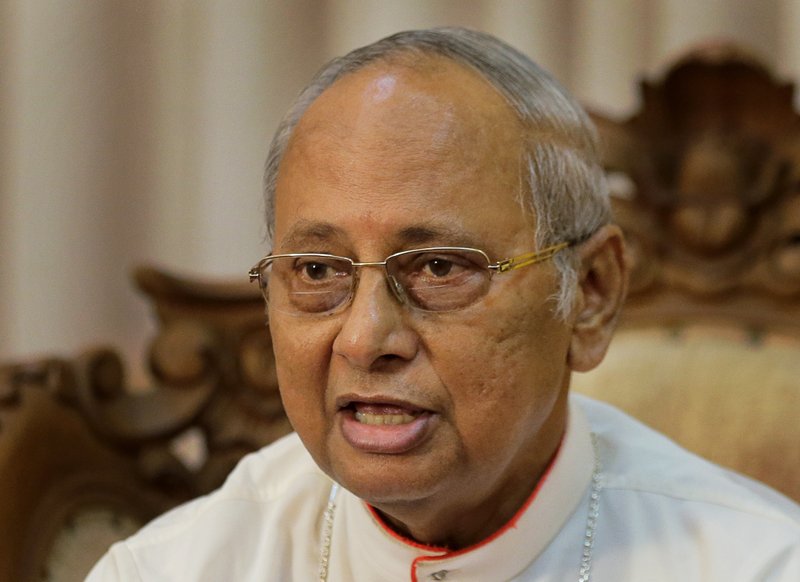 FILE - In this Tuesday, April 30, 2019 file photo, Archbishop of Colombo Cardinal Malcolm Ranjith addresses a press conference in Colombo, Sri Lanka. Sri Lankan Catholic officials said Thursday, May 9, church-run schools that have been closed since Easter Sunday bomb attacks are expected to reopen next week, and Sunday Masses will resume this weekend if security conditions are appropriate. Cardinal Ranjith said that priests have been asked to decide whether to hold services at their churches this Sunday depending on the security situation. (AP Photo/Eranga Jayawardena, File)

TOKYO — The U.S. Navy said Thursday that it has suspended its search for a Japanese air force F-35A stealth fighter that crashed off Japan’s coast last month, after the allies scrambled to locate the aircraft to protect its military secrets.

The pilot is still missing, and Defense Minister Takeshi Iwaya said Japan will continue its search.

The Navy said in a statement that it was withdrawing after a salvage vehicle, CURV 21, found debris from the aircraft. It crashed in the Pacific off the eastern coast of Aomori in northern Japan during a night training flight on April 9. It disappeared about half an hour after taking off from Misawa air base with three other F-35As and about a minute after the pilot abruptly ordered an end to the training exercise.

The Navy was quick in the salvage effort amid air and maritime activity in the region by China and Russia. It dispatched the guided-missile destroyer USS Stethem and P-8A Poseidon surveillance aircraft to join a Japanese search and rescue team. From April 9 to 17, the U.S. search covered more than 5,000 square nautical miles before deploying the CURV 21 remotely operated vehicle, which is capable of salvage operations at a depth of up to 20,000 feet.

Iwaya said Kaimei has also withdrawn, but the surface and underwater search is continuing with the participation of Japanese Air Self-Defense Force vessels as well as a private salvage boat.

“We will continue our search and recovery for the pilot and the aircraft that are still missing, while doing our utmost to determine the cause,” he said.

Findings of the investigation could affect Japan’s F-35 purchase plans, though officials say there has been no change.