Har-Ber advances thanks to 10th-inning single 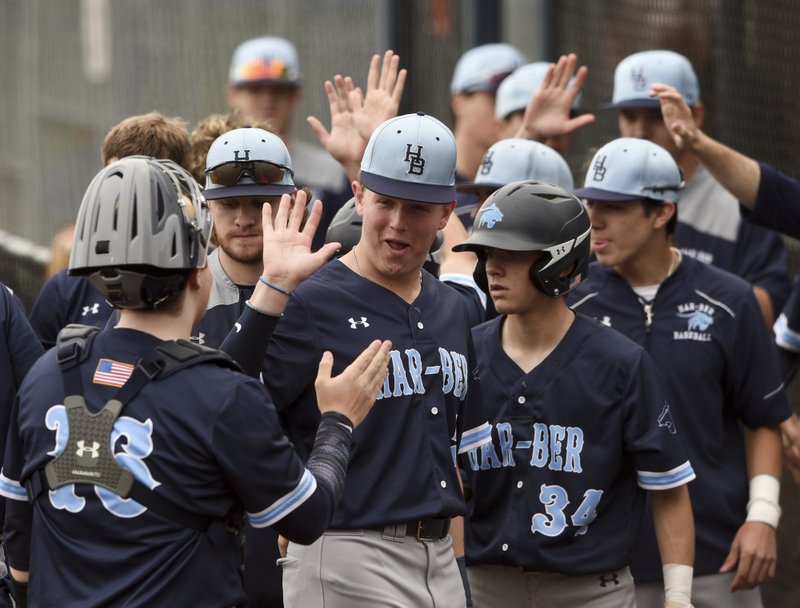 ROGERS -- Defending champion Springdale Har-Ber saw a 5-0 lead disappear in its opening-round game of the Class 6A state baseball tournament, but Sam Stephenson came up with the big hit to help the Wildcats advance.

The junior slapped a 3-2 pitch into right-center field for an RBI single to snap a 5-5 tie in the top of the 10th inning to help Har-Ber earn a 6-5 victory over Conway in a rematch of last year's state title game Thursday afternoon at Veterans Park.

Stephenson, who also doubled and scored, admitted it was a dream situation. He adjusted and stayed back on the breaking ball to get what turned out to be the game-winner against Conway reliever James Hicks.

"It's every little kid's dream to be in that spot, 3-2, two outs," Stephenson said. "Just put it in play, get it to the outfield and get the runner home. He gave me the breaking ball a lot. The first time I faced him, he gave me a curve ball and I swung on it early in the count.

"Coming up again and getting another one, I sat back on it and did my job."

Charlie Acuff then retired Conway in order in bottom of the inning to finish off the victory. He pitched 42/3 innings of shutout relief to earn the victory, allowing 2 hits, with 5 strikeouts and zero walks.

The Wampus Cats tied the game on what looked to be an inning-ending double play, but the Conway runner was called safe at first as the run scored.

Har-Ber Coach Ron Bradley said it was a tough play to accept at the time, but his team was able to move on from it.

"To see our nine-hole hitter to come up there and get a game-winner, that's what it takes," Bradley said. "This was a big ballgame for us to hang in there tough. Acuff did a great job on the mound. We played defense behind him."

Adams and Kirby Jenkins had two hits each for the Wildcats.

Jenkins drove in three runs, including a three-run home run to give Har-Ber a 5-0 lead in the top of the fourth.

Stuart and Colby Cormell had two hits each for Conway, while Stuart drove in two runs.

The Charging Wildcats scored two runs with two outs in the top of the seventh inning thanks to a Van Buren error to rally for the victory.

North Little Rock (12-18) advanced to face Bryant, the No. 1 seed from the Central, today at noon.

Van Buren (19-10) scored two runs in the bottom of the sixth to take the lead thanks to a pair of North Little miscues, but the Pointers returned the favor.

The Pointers were one out from a victory, but NLR's Luke Rice singled to put two runnrs on. Bear Sparks' infield pop-up then fell for an error and both runner scored to give North Little Rock the lead.

Charging Wildcats starter Grant Shahan retired the side in the bottom of the inning to finish off the victory. He allowed 2 runs (both unearned) on 6 hits over 7 innings, while striking out 3 and walking 2.

The Tigers jumped to a 6-0 lead after four innings and went on to defeat the No. 3 seed from the 6A-Central.

Sam Golden and Payton Allen had two hits and two RBI each as Bentonville banged out 14 hits. Four other Tigers added two hits each.

John Satterfield went 2 for 2 and drove in a run for the Rockets, who managed three hits off three different Bentonville pitchers.

Keegan Allen picked up the victory, allowing 3 runs (2 earned) over 41/3 innings. He struck out six and walked four. Allen pitched two scoreless inning to finish off the victory.

The Mounties erased an early deficit with a nine-run inning following a rain delay and went on for the victory.

Rogers will play Cabot at 2:30 today in the quarterfinals.

McKaden Templeton went 4 for 4 with a two-run home run, drove in three runs and scored four times to pace a 16-hit attack for Rogers (17-12).

Javii Goins Jr. hit a three-run home run for the Tigers (11-19) in the top of the third inning inning for a 4-0 lead, but Rogers roared back after a 50-minute rain delay to score nine runs in the bottom of the inning.

BATESVILLE -- The Harrison Goblins scored one run in five of the six innings they batted, coming back from deficits of 2-1 and 3-2 to advance to today's quarterfinal round.

The Morrilton and Joe T. Robinson pitching staffs combined for 12 walks, and 8 of them went to the Devil Dogs including 5 in the top of the second inning when they scored 5 runs and took the lead for good in a victory over the Senators.

Morrilton finished with five hits but got home runs from Marcel Lemmer, Carson Collins and Phillip Drillig. Robinson had four hits including a home run by Luke Pectol.

Batesville collected its first victory at the baseball state tournament in more than a decade, only needing four hits but received five walks and five errors from Malvern.

The score was tied 1-1 through three innings when the Pioneers exploded for four runs in the top of the fifth, scoring them all without a hit.

The Pottsville Apaches scored all eight of their runs in the bottom of the fourth off 4 hits, 5 walks and 2 Monticello errors.

Monticello, which scored all four of its runs in the top of the fifth, finished with three hits.