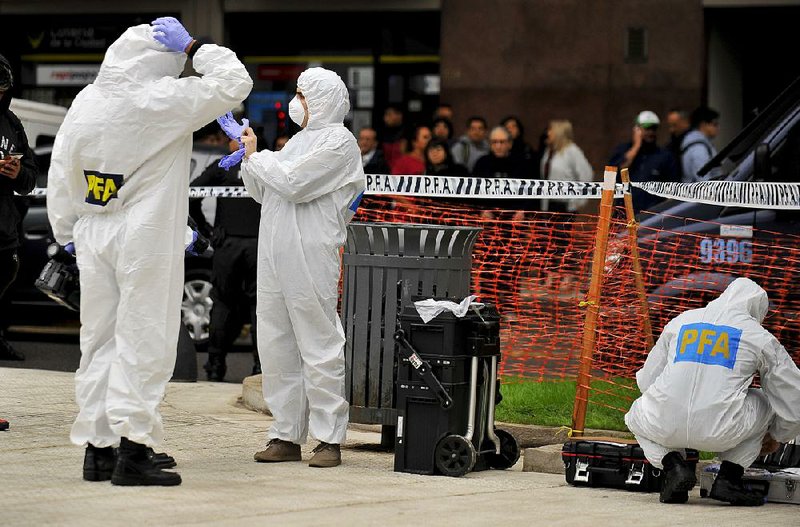 Police collect evidence Thursday at the crime scene where Argentine lawmaker Hector Olivares and another man were shot near the National Congress building in Buenos Aires.

JOHANNESBURG -- The ruling African National Congress held a comfortable lead Thursday with more than half the vote counted from South Africa's presidential and parliamentary election, but it received much lower support than in the last ballot five years ago.

Opposition parties made widespread allegations of corruption against the ruling party a major part of their campaigns ahead of Wednesday's vote and voter apathy also appears to have affected turnout, which fell to 65% from 74% in 2014.

The African National Congress, led by President Cyril Ramaphosa, won 57% of the vote with 60% of the polling districts counted, according to results announced by the electoral commission. It received 62% of the entire vote five years ago.

The Democratic Alliance received 22% of the vote so far, the most of any opposition party, about the same share it received in 2014.

The populist, leftist Economic Freedom Fighters, which also made graft a main campaign issue, increased its share of the vote to nearly 10%.

More than 40 smaller parties also took part in the ballot.

PODGORICA, Montenegro -- A Montenegro court on Thursday sentenced two Russian military intelligence operatives and 11 others to up to 15 years in prison for plotting to overthrow the Balkan country's government and prevent it from joining NATO.

The two Russians, identified as Eduard Shishmakov and Vladimir Popov, were tried in absentia and convicted of attempted terrorism and creating a criminal organization.

The verdict said the group planned to take over the parliament in Montenegro on election day -- Oct. 16, 2016 -- assassinate then-Prime Minister Milo Djukanovic and install a pro-Russia, anti-NATO leadership in the Adriatic Sea nation. Russia denies the accusations.

The U.S. Embassy in the capital, Podgorica, said the verdict against the reported operatives from the GRU Russian military intelligence service and others represents a "historic day for the rule of law" in Montenegro.

Shishmakov received a 15-year prison term while Popov got 12 years. Two leading ethnic Serb opposition politicians, Andrija Mandic and Milan Knezevic, were sentenced to five years each. The other nine others convicted received verdicts ranging from eight years in jail to suspended sentences.

Argentine lawmaker Hector Olivares and his adviser and friend Miguel Marcelo Yadon, were walking side by side Thursday morning on a sidewalk near Argentina's National Congress in Buenos Aires when gunmen ambushed them.

Olivares, 61, was struck three times, according to Argentine media outlets, and was in serious condition at a hospital. Yadon was struck five times and killed.

Security footage released by the Argentine government in the aftermath of the unusual attack shows a confusing scene.

Although both men fall to the ground, one then rises and seems to be trying to find his way to the street to seek assistance. At the same time, two people emerge from the car where the shots appeared to have originated. One crosses the street and continues on foot, and the other gets back into the vehicle.

A bicyclist stops to speak with the victim closest to the street. The car lingers at the scene, even after the bicyclist appears, before slowly pulling away. Argentine authorities have already recovered the vehicle they said was used in the shooting, Reuters reported.

She told reporters in Buenos Aires that "there is progress in the investigation" and that Yadon, not Olivares, appeared to have been the target.

MELBOURNE, Australia -- Three Sunni Muslim men were convicted Thursday of engaging in a terror act by burning down a Shiite mosque in the Australian city of Melbourne three years ago.

A Victoria state Supreme Court jury convicted Abdullah Chaarani, Ahmed Mohamed and Hatim Moukhaiber over the firebombing of the Imam Ali Islamic Center on Dec. 11, 2016. No one was injured in the blaze.

Mohamed and Moukhaiber had both denied any involvement. Chaarani conceded that he was there, but argued he had been part of an act of protest, advocacy or dissent, but not terrorism.

Chaarani and Mohamed also were found guilty of attempting to commit a terror act over a failed attempt to burn down the mosque two weeks earlier on Nov. 25.

The three will appear in court for sentencing next week. They each face a potential maximum sentence of life in prison.

Mohamed and Chaarani had previously been convicted of planning a terrorist attack on central Melbourne locations including the Federation Square restaurant, St. Paul's Anglican Cathedral and Flinders Street train station on Christmas Day in 2016.

They were among five men found guilty in November last year after the plot was foiled by police. The five have yet to be sentenced on those convictions. 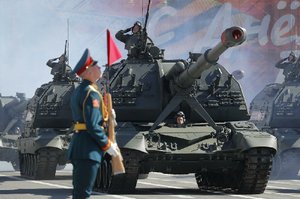