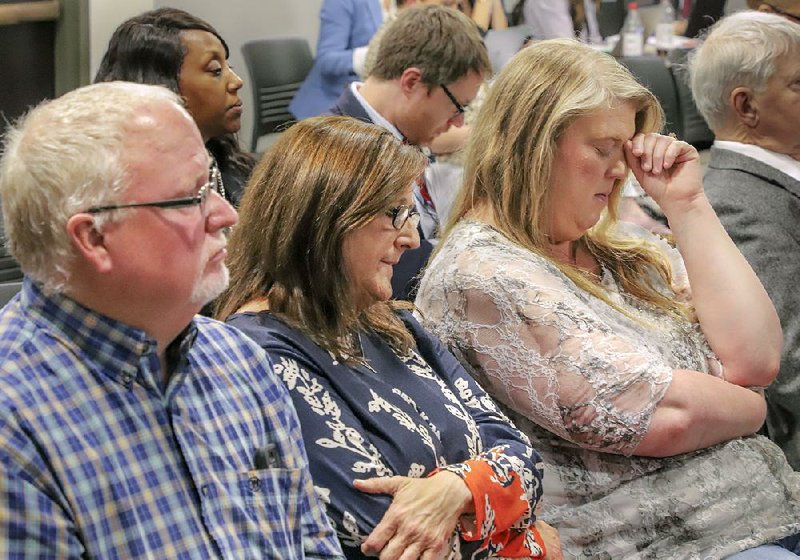 The Arkansas Board of Education voted 7-0 Thursday to close the tiny but award-winning Kingsland Elementary School in the Rison-based Cleveland County School District.

The local School Board had voted 6-1 in April to close the campus beginning with the 2019-20 school year. But the lack of a unanimous vote on shuttering a school that was once part of a state-designated "isolated" school system made it necessary, by law, for the final decision to be made by the state Education Board.

Kingsland Elementary, which had a kindergarten-through-fifth-grade enrollment of 71 pupils on April 8, is a National Blue Ribbon School this school year -- one of three in the state honored for student achievement or closing achievement gaps among student groups.

The campus is also the workplace of the state's sole $25,000 Milken Educator Award winner this year.

The Kingsland and Rison campuses are 8 miles apart.

The two districts were among dozens of districts across the state that in the early 2000s underwent consolidations and annexations in an effort to reach a state-mandated minimum enrollment of 350 students.

While the administrations of the districts were combined, the individual campuses were allowed to stay open at least for a short period and, if considered isolated campuses, couldn't be closed without complying with certain provisions of state law.

The law for example requires a unanimous school board vote to close a campus in a former district. Failing that, the decision is to be made by the state Board of Education. The Education Board decision is supposed to be based on what is best for all students in a district .

Craig Dupuy, Cleveland County superintendent, told the state board that his plan to transport Kingsland Elementary pupils to Rison Elementary School was prompted by financial projections for the 832-student district that is expected to continue to see a decline in student enrollment and state funding while costs for employee salaries and benefits increase.

That includes maintaining over the long term the teacher salary increases provided by state lawmakers earlier this school year, he said.

"The burden is real and hitting home a lot faster than you would think," Dupuy said about escalating costs and possible state classification of fiscal distress. "We can't poke our head in the sand and hope it will pass us by -- it won't," he said.

He also said that the merging of the Kingsland and Rison pupils and faculties would create efficiencies. The kindergarten would have 38 pupils, rather than seven at Kingsland and 31 at Rison, for example.

By combining the elementary campuses, Dupuy said the district can reduce the number of teaching and support positions in the district through retirements and resignations, thereby saving money without laying off employees.

Shane Matthews, a resident of the Kingsland community and the parent of a child at the school -- the birthplace of the late country music superstar Johnny Cash -- presented a petition signed by at least 124 residents of the rural area in support of the Kingsland campus.

Matthews asked for an objective, thorough feasibility study into the possibility of making the Kingsland Elementary School the Cleveland County district's sole elementary campus rather than Rison Elementary School.

"We understand that there are real issues with the budget. Money has to be found and changes have to be made. We acknowledge that something must be done. We just want to be sure before making such a drastic move that all options have been exhausted," said Matthews whose wife works at the Rison campus.

Matthews pointed out the Kingsland campus has desirable features that include a safe room, a dedicated music room, an updated cafeteria, a full gymnasium, a playground, recent roof replacements on buildings other than the relatively new 11-classroom elementary building. There is also a new library and auditorium.

"I realize Rison has a larger school and larger buildings. That doesn't mean that their buildings are better equipped to ... provide a quality education," he said and noted that teacher Tasha Wilson received the $25,000 Milken Educator Award this year and the school's National Blue Ribbon designation.

Dupuy told the state Education Board that a single elementary campus needs at least 17 classrooms. He also said there would be an additional expense to the district for transporting Rison pupils to the Kingsland campus.

In response to questions from the state Education Board, Dupuy said the Kingsland campus would likely become an expanded Head Start center for the area, with federal funding to be used for much of the building and food service costs.

Southeast Arkansas College also is interested in using part of the building for a satellite campus in partnership with the Cleveland County district, Dupuy said.

"The Kingsland School campus building did not physically win either one of those two awards," Dupuy said about the U.S. Department of Education's Blue Ribbon award for the Milken Educator Award to second-grade teacher Wilson. "It was the staff and students at those buildings who won the awards and it will be the same staff and students who will transition to Rison Elementary and continue to great things," he said.

"Making tough decisions at the local level are what will keep this district alive," added Dupuy who described himself as a first year superintendent and himself a graduate of a rural school district -- Gillett -- that later became part of the DeWitt School District.

Education Board member Susan Chambers of Bella Vista urged Dupuy to reach out to the community to allow members of the public to hear the rigor of his study on the district's finances, including the potential for layoffs if the school isn't closed and the need for a property-tax increase from voters.

Education Board member Sarah Moore of Stuttgart, asked about features at the Rison school that would be available to the Kingsland children.

Besides an academic enrichment program, theater and elementary school quiz bowl competitions, the single elementary campus would have a full-time principal and counselor. No longer would the two campuses have to share the services of a music and an art teacher.

The Kingsland School most recently earned a grade of C from the state for student performance on the ACT Aspire and other criteria. The school had a B in the previous, 2017-18, school year. 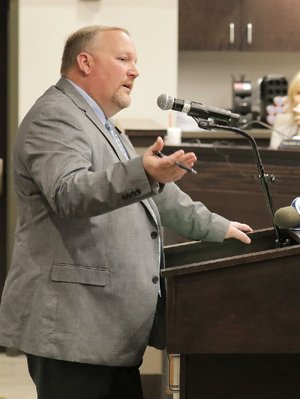 Photo by Arkansas Democrat-Gazette/JOHN SYKES JR.
Craig Dupuy, superintendent of the Cleveland County School District, told Arkansas Board of Education officials Thursday that merging Kingsland and Rison students and faculties would create efficiencies, and cut teacher and support positions through retirements and resignations without laying off anyone.