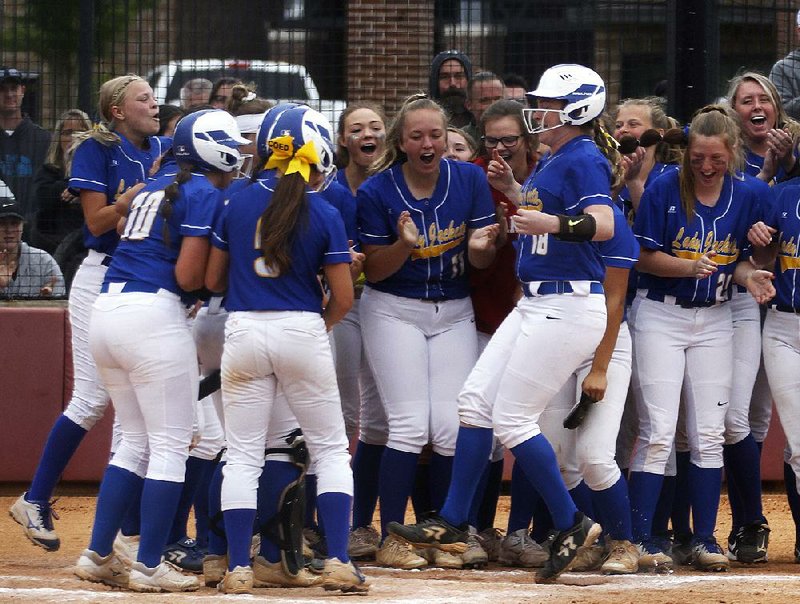 Sheridan’s Bailee Bibb (center) celebrates with teammates after hitting a three-run home run in the Lady Yellowjackets’ victory over Beebe on Friday in Benton. For more photos, see arkansasonline.com/511softball5a.

BENTON -- The Benton Lady Panthers knew what to expect and what to do about it.

Behind sophomore pitcher Tuesday Melton, Benton withstood a late rally to hold on for an 8-6 victory over the Vilonia Lady Eagles in the quarterfinal round of the Class 5A state softball tournament at the Benton Athletic Complex on Friday.

Four hits and four runs in the bottom of the fifth inning gave Benton (24-6) an 8-2 lead. With two outs, senior first baseman Caitlin Ginther doubled to knock in a run, and later scored on a single by freshman left fielder Aubree Goodnight, who scored on senior center fielder Cortney Wilcox's single.

"Any time we play Vilonia, we get a little bit nervous," Cox said. "We know they're never going to give up. Every player on that team gives it their all every time."

Vilonia senior pitcher Gracie Kimbrell led off the top of the sixth inning with a single and advanced to third on senior first baseman Emily Farmer's double. Kimbrell scored on an error. With two runners on, Melton struck out the next two batters.

Up next was Vilonia's ninth batter, junior second baseman Reagan Bates. She had struck out in her first two at-bats, but her two-strike blooper down the third-base line knocked in two runs, and Vilonia (16-15) had cut Benton's lead to 8-6.

"I'm so proud of these girls," Vilonia Coach Kevin Sullivan said. "They never hung their heads, but that's something they've shown all season. They weren't going to give up."

Melton said all she and her teammates needed to do was play like they had through the first five innings to hold off Vilonia's charge.

"I was a little worried after that inning, but as soon as we got back to the dugout, we all said that we just had to go back out there and play the way we play," Melton said.

Melton hit a batter to allow one base runner in the seventh inning, but otherwise she held Vilonia to three routine fly-ball outs.

"We were going to stick with Tuesday," Cox said. "She's been our ace, and we knew she would settle down."

"Benton is so solid," Sullivan said. "They are just so fundamentally sound that you know they aren't going to beat themselves."

Junior Bailee Bibb slugged two home runs to account for five RBI as the Lady Jackets (25-4) rolled to a five-inning victory over the Lady Badgers (20-7).

Winning pitcher Rheding Wagnor slugged a home run as the Lady Bulldogs (24-5) earned a four-inning victory over the Lady Wildcats (18-9).

Wagnor, a junior, struck out three and allowed three hits.

The Lady Apaches had just one hit and three base runners while the Lady Miners had one hit and two base runners through the first five innings as the score was tied 0-0 going into the sixth. Pottsville scored two runs in the top of the sixth as two batters were hit by a pitch. Abbie Cain had an RBI triple and scored on an error.

Bauxite got one run back in the bottom of the sixth before Pottsville scored three more in the top of the seventh on four hits and two walks.

The Morrilton Lady Devil Dogs (25-6) knocked off the Valley View Lady Blazers to advance to the Class 4A semifinals.

Valley View (26-2) pitcher Katie Dreiling was throwing a no-hitter through six innings before Morrilton's Anna Grace Ferrell led off the top of the seventh inning with a double to left, moved to third on a sacrifice bunt by Graci Thomas and scored on an infield single by Shelby Tindall.

The Lady Blazers got four hits off Morrilton pitcher Makenna Keeton but could not get anyone past second base and failed to score for the first time this season.

The tournament's second rain delay started in the bottom of the first when the Farmington Lady Cardinals' first two batters had reached base. After over an hour-plus delay, both scored to start the Lady Cardinals on their way to a victory over the De Queen Lady Leopards.

Farmington (24-2), the only No. 1 seed to advance to the semifinals, scored two runs in each of the first three innings to build a 6-0 lead before De Queen cut the lead in half with three runs in the top of the fifth. The Lady Cardinals finished up with two runs in the fifth and three in the sixth.

Farmington had 11 hits as Alyssa Reed and Madison Parrish each hit a two-run home run. De Queen finished with eight hits as Madison Runnels and Karlee Helms each had two.

The Lady Bearcats held off the Gravette Lady Lions in Friday's late semifinals.