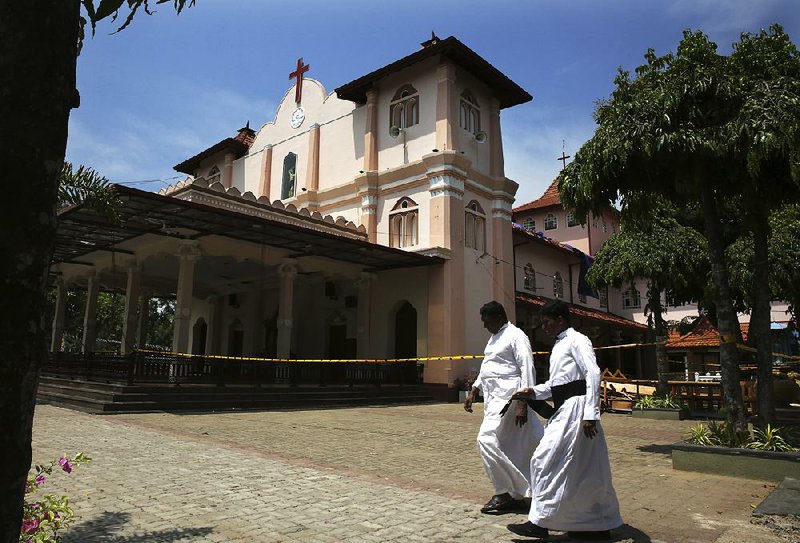 Sri Lankan Roman Catholic priests walk past damaged St. Sebastian’s Church in Katuwapitiya village in Negombo, north of Sri Lanka’s capital city of Colombo. Christians in Sri Lanka belong to both its main ethnic groups, and that rare inclusiveness of a small religious minority could explain the measured calm that has been the response so far to the Easter attacks. But there’s widespread fear that more attacks could plunge Sri Lanka into the cycle of violence and retaliation that marked the bloody civil war that ended a decade ago.

COLOMBO, Sri Lanka -- During the bad years, when rebels mostly from the ethnic minority Tamils and majority Sinhalese government forces were slaughtering each other in a horrific civil war, Gnanamani found solace in something many of her fellow Tamils didn't have: Christianity, and especially its long inclusion of both the Tamil and Sinhalese ethnic groups.

After Islamic militants detonated suicide bombs on Easter Sunday that killed worshippers in three churches, including St. Anthony's, a few blocks from Gnanamani's home in the warren of streets of Colombo's 13th zone, she and other Tamil and Sinhalese Christians are again turning to a religion that -- unusually for Sri Lanka, where Tamil Hindus and Sinhalese Buddhists are largely homogenous -- binds people of different ethnicities by a single faith.

Experts and Christians interviewed by The Associated Press after the attacks say this embedded ethnic cooperation, along with Christian leaders who have consistently preached restraint, helps explain the measured calm that has -- so far -- been the response to the coordinated bombing of churches and hotels that killed more than 250 people.

"Being a Christian sets an example to others, because we did not retaliate after this violence was done to us. We were restrained, Sinhalese and Tamil Christians both," Gnanamani, a 60-year-old housewife who goes by one name, said as she squatted on her stoop in a narrow, sunless alley, hundreds of black and white condolence streamers fluttering in a breeze above. "If this happened to Buddhist shrines or temples, there would have been an explosion of violence."

There is indeed widespread fear here that more attacks, especially if they target other faiths, could return Sri Lanka, which is majority Buddhist but has significant Christian, Muslim and Hindu populations, to something like the cycle of sectarian violence and retaliation that marked the nearly three-decade civil war that ended in 2009.

"Within the Christian community there has to be moderation because by its nature it consists of two different ethnic communities. There's a natural instinct for them to look at such religious and ethnic issues with deep compassion," said Rohan Gunaratna, a religion and security expert and co-author of The Three Pillars of Radicalization.

But peace is not guaranteed.

"Sri Lanka must not take this Christian inter-religious harmony for granted," Gunaratna said. "The danger is that the Christian patience could break if there are more attacks, and that is what the terrorists want."

About 7% of Sri Lanka's 21 million people are Christian, and most of those are Roman Catholic, according to Mathew Schmalz, a professor at the College of the Holy Cross and an expert on Christianity in South Asia.

There has not always been universal Christian unity and restraint in Sri Lanka.

During the civil war that began in 1983, Christianity was divided, with members of the faith fighting for the largely ethnic Tamil separatists and the mostly Sinhalese Buddhist government forces, experts say, and some tension still lingers.

With the recent attacks against Christians and foreigners, there is worry that militant anti-Muslim Buddhists might be strengthened.

"There might be less incentive now to step in to defend Muslims, and militant Buddhists might claim that they had been right all along to see Muslims as a threat," Schmalz said.

The largely peaceful mixing of religions and ethnicities found in many parts of Colombo can be seen in the extended family of Anoma Damayanthi Liyanage, a 52-year-old Buddhist factory worker who lives in a small, neat, tin-roofed house in an alley off Jampettah Street in the Kochchikade neighborhood near St. Anthony's.

Liyanage's 25-year-old daughter, who married into a Christian family, was seriously injured in the blast. Liyanage herself was at St. Anthony's and escaped the bomb only because she left a few minutes earlier with her Christian son-in-law when her 1 ½-year-old granddaughter began crying too loudly.

Her daughter, 21-year-old Isharaa, said, "We get together because of our Christian traditions. We're not Tamil or Sinhalese. We look first if there is Christianity."

The bombings, however, have stirred complex feelings among Christians.

Not far from the bombed church of St. Sebastian's in a village in the city of Negombo, beyond the metal security barriers and the dozens of camouflaged soldiers carrying automatic weapons, Catholic priests Niroshan Perera and Anthony Nishan stand in their long white cassocks and watch fresh graves being dug for Christians killed by the attack on their church. There are 41 dirt mounds piled with flowers and candles, with wooden crosses marked mostly with numbers that correspond to names in a book that the priests keep.

There is fear of more violence and deep grief in this majority Christian enclave outside Colombo.

"The whole village is a funeral. The houses here are filled with coffins," Nishan said of a place where about 120 Christians died April 21.

Within the Colombo diocese, Catholic services were canceled for a second weekend after the bombing.

There is also rage. Perera, 45, had a single description for the politicians who were told that terror attacks against Christians might be coming but didn't notify the communities: "terrorists."

A Catholic villager -- Senake Perera, 55, a Sinhalese Catholic -- said he would follow the restraint preached by Catholic leaders. But he also had a very human response to the fresh graves and wooden crosses, to the coffins and the dozens of color photos of the victims displayed on banners that fill this neighborhood.

For the time being, however, like the Christians of Colombo who were interviewed, there is a belief that Catholics won't hit back.

"After the tragedy, we are united because of the practice of dealing with other ethnicities which is within our Christianity," said Nishan, 29, the son of a Tamil father and Sinhalese mother, and who often says Masses in Tamil, Sinhala and English. "Even if there are more attacks, Catholics won't respond with violence.

"That's the beauty of Christianity here. We don't have the division. We have to live together." 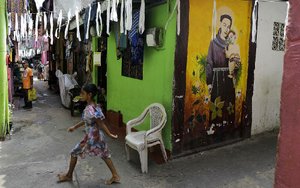 Photo by AP/ERANGA JAYAWARDENA
A Sri Lankan child walks past a graffiti of St. Anthony at a neighborhood near St. Anthony’s Church, one of the sites of the Easter Sunday bombings, in the Sri Lankan capital. 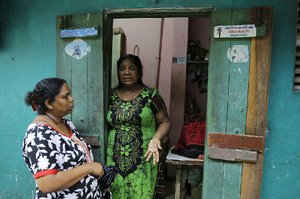 Photo by AP/ERANGA JAYAWARDENA
Gnanamani, an ethnic 60-year-old Tamil Christian in Sri Lanka who goes by one name, speaks with a neighbor by the doorway of her home situated near St. Anthony’s Church, one of the churches that was attacked on Easter Sunday.