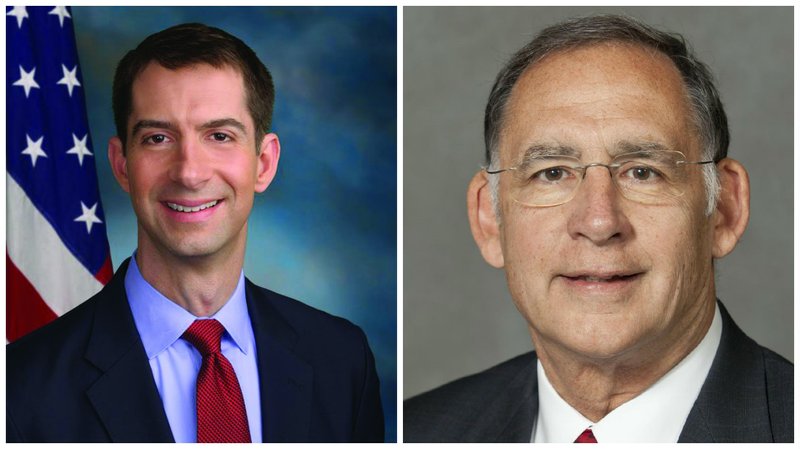 The committee's Chairman Richard Burr, R-N.C., also received criticism last week from some of Trump's Capitol Hill allies, who are eager to put special counsel Robert Mueller's report behind them.

Although Trump Jr. met with Russians during the 2016 presidential campaign, Mueller reported finding no evidence of a conspiracy between Russia and the Trump family or the Trump campaign.

Thus far, the rationale for the subpoena is unclear, Boozman said.

"I have no sense of why it was done or what the need is, so we'll just have to wait," the Republican from Rogers said. "The good news is that Richard has stated publicly that they have no evidence of collusion."

Cotton, who serves with Burr on the committee, also portrayed the subpoena as unexpected.

"I understand the president's surprise on this. But the bottom line, as Sen. Burr said a couple of weeks ago, is there's no collusion. The reason why we didn't find any collusion on the Senate Intelligence Committee is the same reason Bob Mueller didn't: There is no collusion," the Republican from Dardanelle said Friday.

The committee's role and its focus are different from the independent counsel's, Cotton noted.

While Mueller was looking backward for evidence of criminal conduct, the committee is looking forward with the hope of heading off foreign interference in future U.S. elections, he said.

"What Sen. Burr is trying to do is make sure that we have all the facts, we know exactly what Russia was up to, so we can stop them from doing that same thing in the future," Cotton said.

"I suspect that Sen. Burr and the president's son will work out some kind of compromise, whether it's written question and answers or an informal interview, that will get him and the committee the information that it needs to make sure that we can issue a full report with proper recommendations to stop Russia or China or Iran or anyone else who might want to mess with our elections in the future," Cotton said.

"I sure wish Sen Richard Burr was as interested in Biden's cushy deals w/ Ukraine & China while VP than he is in the harassment of @DonaldJTrumpJr over a CLOSED witch hunt. #Enough," Huckabee posted on Twitter. He was referring to announced Democratic presidential candidate and former Vice President Joe Biden.