Jan and Rick Murphy of Little Rock are the parents of the bride. She is the granddaughter of Doris and the late Judge John W. Goodson and James R. and the late Kathryn Dolch Murphy, all of Texarkana.

Parents of the groom are Mary Lynn and Jim Shanahan of Potomac, Md. His grandparents are the late Marilyn and James Robert Shanahan of Chicago and the late Florence and Paul Waclawsky of Philadelphia.

Ceremony music was by The Schola, members of the Cathedral Choir; violinist Kiril Laskarov; organist Jason A. Pennington-Saugey; and choirmaster Victoria Mathis Harden.

Given in marriage by her father, the bride wore a strapless silk mikado trumpet gown with cuffed neckline and asymmetrical bow at the back. She carried a bouquet of peonies, garden roses, ranunculus and sweet peas in soft pinks, peaches, creams and whites.

Also attending the bride were Chandler Bailey, Erin Coleman and Lucy Whiteside, all of Little Rock; Beckett Beaulac, Gabrielle Brundige and Elizabeth Gerding, all of Brooklyn, N.Y.; Jillian Eischeid of Nashville, Tenn.; Wesley Goodson of Fayetteville, cousin of the bride; Jennifer Grinnan of Dallas; Kathryn Kurtz of Texarkana, Texas, cousin of the bride; and Meredith Mitchell of New York.

A reception was held at the Country Club of Little Rock. Cherry branches framed the doorway into the Presidents Room and towering trees with hanging flowers outlined the dance floor. Guest tables were centered with vintage bottles filled with peonies, ranunculus and garden roses or white porcelain bowls full of wedding flowers. Music was by The Number One Party Band of Nashville.

The bride has bachelor's degrees in media studies and English from the University of Virginia. She is a senior marketing manager, North America, for Monica Vinader.

The couple will live in New York after a honeymoon on Petite St. Vincent in The Grenadines. 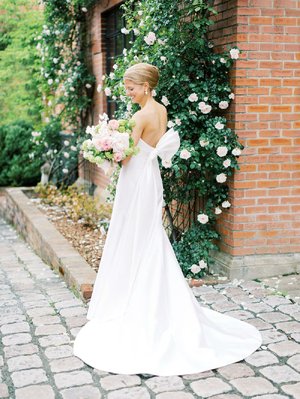