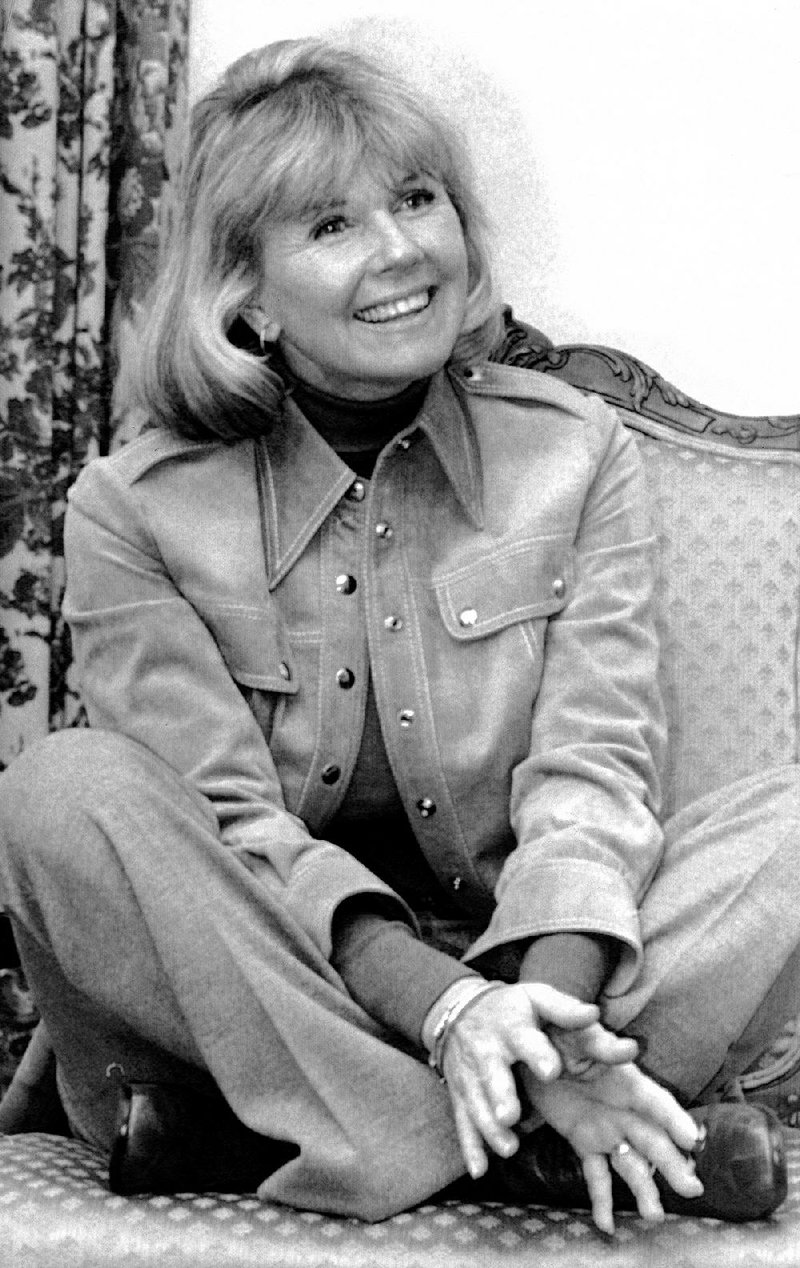 Doris Day, the freckle-faced movie actress whose irrepressible personality and golden voice made her America's top box-office star in the early 1960s, died Monday at her home in Carmel Valley, Calif. She was 97.

Day began her career as a big-band vocalist, and she was successful almost from the start. One of her first records, Sentimental Journey, released in 1945, sold more than 1 million copies, and she went on to have numerous other hits. Bandleader Les Brown, with whom she sang for several years, once said, "As a singer Doris belongs in the company of Bing Crosby and Frank Sinatra."

But it was the movies that made her a star.

Between Romance on the High Seas in 1948 and With Six You Get Eggroll in 1968, she starred in nearly 40 movies. On the screen, she turned from the perky girl next door in the 1950s to the woman next door in a series of 1960s sex comedies that brought her four first-place rankings in the yearly popularity poll of theater owners, an accomplishment equaled by no other actress except Shirley Temple.

In the 1950s she starred, and most often sang, in comedies (Teacher's Pet, The Tunnel of Love), musicals (Calamity Jane, April in Paris, The Pajama Game) and melodramas (Young Man With a Horn, the Alfred Hitchcock thriller The Man Who Knew Too Much, Love Me or Leave Me).

She went on to appear in Pillow Talk (1959), Lover Come Back (1961) and That Touch of Mink (1962), fast-paced comedies in which she fended off the advances of Rock Hudson (in the first two films) and Cary Grant (in the third). Those movies, often derided today as examples of the repressed sexuality of the '50s, were considered daring at the time.

Day turned down the part of Mrs. Robinson, the middle-aged temptress who seduces Dustin Hoffman, in the groundbreaking 1967 film The Graduate, because, she said, the notion of an older woman seducing a young man "offended my sense of values." The part went to Anne Bancroft, who was nominated for an Academy Award.

By the time she retired in 1973, after starring for five years on the hit CBS comedy The Doris Day Show, Day had been dismissed as a goody-two-shoes, the leader of Hollywood's chastity brigade, and, in the words of film critic Pauline Kael, "the all-American middle-aged girl."

But the passing decades have brought a reappraisal, especially by some feminists, of Day's screen personality and her achievements. In her book Holding My Own in No Man's Land (1997), critic Molly Haskell described Day as "challenging, in her working-woman roles, the limited destiny of women to marry, live happily ever after and never be heard from again."

Day, in fact, was one of the few actresses of the 1950s and '60s to play women who had a real profession, and her characters were often more passionate about their career than about their co-stars.

But while Day was instantly successful as a singer and a movie actress, she was fated always to marry the wrong men. By the time she made her first movie she had been married and divorced twice.

Terry Melcher, her only child, who became a successful record producer, died in 2004. Information on survivors was not immediately available.

Day was born Doris Mary Anne Kappelhoff in Cincinnati on April 3, 1922. (For years most sources gave her birth year as 1924 and so did she. But shortly before her birthday in 2017, The Associated Press obtained a copy of her birth certificate from the Ohio Office of Vital Statistics and established that she had been born two years earlier. After Day was shown the evidence, she said in a statement, "I've always said that age is just a number, and I have never paid much attention to birthdays. But it's great to finally know how old I really am.") She was the second child of Frederick William von Kappelhoff, a choral master and piano teacher who later managed restaurants and taverns in Cincinnati, and Alma Sophia (Welz) Kappelhoff. Her parents separated when she was a child.

Day never wanted to be a movie star. At 15 she was a good enough dancer to win the $500 first prize in an amateur contest. Her mother and the parents of her 12-year-old partner used the money to take them both to Los Angeles for professional dancing lessons. The families intended to move west permanently, but Doris' right leg was shattered when the automobile in which she was riding was hit by a train.

To distract Doris during the year it took the leg to mend, her mother -- who had named her after a movie star, Doris Kenyon -- paid for singing lessons. She was a natural.

Day told Hotchner that another important thing happened during her year of recuperation: She was given a small dog.

"It was the start of what was, for me, a lifelong love affair with the dog," she said.

That first dog, Tiny, was killed by a car when Day, still on crutches, took him for a walk without a leash. Nearly 40 years later she spoke of how she had betrayed him. During the last decades of her life, through her foundation, Day spent much of her time rescuing and finding homes for stray dogs, even personally checking out the backyards and fencing of people who wanted to adopt. And she worked to end the use of animals in cosmetic and household-products research.

After the accident, Day never went back to school. At 17, having traded her crutches for a cane, she sang in a local club where the owner changed her name because Kappelhoff would not fit on the marquee. After a few months as a singer with Bob Crosby and His Bobcats in Chicago, she joined Les Brown and His Blue Devils.