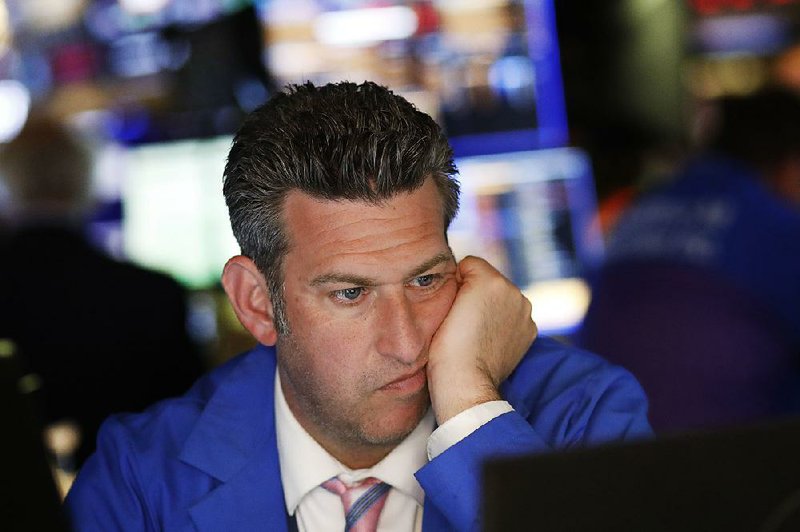 A trader watches stocks drop sharply Monday at the New York Stock Exchange as investors sought shelter from the escalating trade war between the U.S. and China. The Dow Jones industrial average fell more than 600 points on the day.

The U.S. on Monday prepared to hit China with new tariffs, further escalating the countries' trade war hours after Beijing announced plans to raise levies on $60 billion worth of U.S. goods.

The U.S. trade representative's office Monday released a list of about $300 billion worth of Chinese goods upon which the administration intends to levy tariffs of up to 25%. The trade representative's office invited comments on the plan and said it will hold a public hearing June 17. The list includes consumer staples such as mobile phones and toys.

Earlier in the day, President Donald Trump said he'll meet with Chinese counterpart Xi Jinping at a meeting of Group of 20 leaders scheduled for June 28-29 in Osaka, Japan. But Trump warned China not to go too far in responding to U.S. trade actions.

"There can be some retaliation, but it can't be very substantial," Trump told reporters Monday at the White House during a meeting with Hungarian Prime Minister Viktor Orban.

U.S. stocks dropped on signs of an escalating trade war, with the S&P 500 posting its biggest single-day loss in four months.

The Finance Ministry in Beijing unveiled the measures on its website less than two hours after Trump tweeted a warning that "China should not retaliate -- will only get worse!" The new rate of 25% will apply to 2,493 U.S. products, with other goods subject to duties ranging from 5% to 20%, China said.

China's move to raise tariffs came in response to the U.S.' decision last week to increase levies on $200 billion in Chinese imports to 25% from 10%. Trump on Monday accused China of backing out of a deal that was taking shape, saying Beijing reneged on an agreement to enshrine a variety of changes in Chinese law.

"I say openly to President Xi & all of my many friends in China that China will be hurt very badly if you don't make a deal because companies will be forced to leave China for other countries," Trump wrote on Twitter. "You had a great deal, almost completed, & you backed out!"

"Ultimately, this is a political decision for the president and not an economic decision," said Ely Ratner, executive vice president of the Center for New American Security. "Does the political benefit of standing up to China change as the tariffs bite the economy? That's the fundamental question."

China's retaliation matches Trump's move last week in that it simply raises the duties on a list of thousands of items that had already been targeted in an earlier phase of the trade war.

Still, the two countries have given themselves something of an escape hatch: The higher Chinese tariffs don't kick in for 2½ weeks.

Both countries have indicated more talks are likely. Top White House economic adviser Larry Kudlow said on Sunday that China has invited U.S. Trade Representative Robert Lighthizer and Treasury Secretary Steve Mnuchin to Beijing. But nothing has been scheduled.

Mnuchin said on CNBC that the two sides remained in "ongoing" negotiations.

"I love the position we're in," Trump told reporters.

Imports of American cars aren't affected, as a duty of 25% from a separate list of tariffs was suspended during the negotiations as a sign of goodwill.

As the trade dispute escalates, "there will be price hikes at Target, Costco, Home Depot and Walmart," said Nelson Dong, a partner with Dorsey and Whitney in Seattle. "The importers are going to pass on some or all of the tariff to the consumer, and that will become much more readily apparent and harder to mask."

Farm commodities such as pork and cotton slumped Monday, with soybeans falling 0.8% to $8.04 a bushel. They were trading around $9 a bushel last month and are now at their lowest price since December 2008. Agribusiness stocks, including Archer-Daniels-Midland Co. and Bunge Ltd., also retreated.

In a statement, American Soybean Association President Davie Stevens, a farmer from Clinton, Ky., expressed frustration that "the U.S. has been at the table with China 11 times now and still has not closed the deal. What that means for soybean growers is that we're losing. Losing a valuable market, losing stable pricing, losing an opportunity to support our families and our communities."

Sen. Charles Grassley, R-Iowa, said it is time for U.S. allies to "get in the game" to push China to the negotiating table. "China needs to get with it," he said. "You can't move these goalposts like they're moving them and expect to be respected."

Many industries have cheered the president for confronting China over its pilfering of trade secrets and its market-distorting policies. But executives have grown increasingly restive as the tariff toll has mounted.

"This is a self-inflicted wound that will be catastrophic for the nation's economy," said Rick Helfenbein, president and CEO of the American Apparel and Footwear Association. "By tightening the noose and pulling more consumer items into the trade war, the president has shown that he is not concerned with raising taxes on American families, or threatening millions of American jobs that are dependent on global value chains."

China is running out of U.S. imports to penalize because of the lopsided trade balance between the world's two largest economies. Chinese regulators have instead targeted American companies in China by slowing down the clearing of shipments through customs as well as the processing of business licenses.

Oxford Economics calculated that higher tariffs will reduce the U.S. economy by 0.3% in 2020, a loss of $490 per American household.

Similarly, forecasters have warned that the U.S. tariff increases could set back a Chinese recovery that had appeared to be gaining traction.