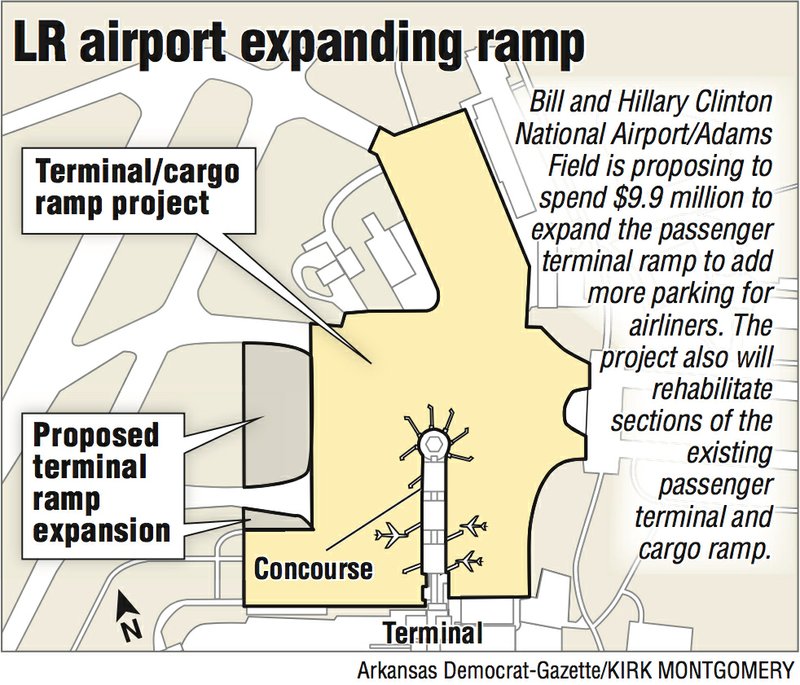 Bill and Hillary Clinton National Airport/Adams Field is out of parking space.

Not for cars, but for airliners.

There's not only more of them these days, but they are increasingly larger and take up more space than the regional jets they replaced. Throw in frequent diversions of unscheduled airline flights because of weather in Dallas or Memphis, and the parked airliners, at times, can spill out onto taxiways, airport officials said.

They also are looking toward the future when additional space will be needed to expand the terminal concourse from the 12 gates it has now. But the need is now, they said.

"We're running out of parking space, and it needs to be at the terminal for those aircraft," said Tom Clarke, the properties, planning and development director for Clinton National.

The state's largest airport wants to remedy that by expanding the ramp -- or space to park aircraft around the passenger terminal -- by 5 acres at a cost of $9.9 million.

The price tag also includes rehabilitating sections of the existing ramp around both the passenger terminal and cargo terminal, which together total 37 acres, as well as work on adjoining taxiways.

The project ultimately will be paid for with $4.4 million in federal money dedicated to the airport with the rest in federal discretionary grants. However, the airport likely will have to use its own money to pay for the project upfront and get reimbursed from the federal government later, they said.

On Tuesday, the Little Rock Municipal Airport Commission's lease and consultant selection committee accepted the airport staff's recommendation that the contract be awarded to Weaver-Bailey Contractors, which has its headquarters in the White County community of El Paso. The three-member committee -- Chairman Jill Floyd, Stacy Hurst and Mark Camp -- voted to send the recommendation to the full commission, which meets next Tuesday.

But not without seeking justification for the project from staff first.

"Why is the proposed terminal ramp needed and what will it accomplish?" Hurst asked after a presentation on the proposed contract.

Clarke said the concourse's 12 gates already are filled daily with aircraft remaining overnight. Typically, they fly the last leg into Clinton National the previous night and are ready for an early departure the next morning.

"In years past, we haven't utilized all 12 gates for remain-overnight aircraft," he said.

Still other airliners arrive during the night and are waiting for a gate to be vacated, Clark said. "Now each one of those gates is full."

Brian Malinowski, the airport's deputy executive director, calls it the "morning push," the airport's version of rush hour, noting that Delta Air Lines, for one, has three aircraft remain overnight for two gates.

Airlines increasingly are switching to larger aircraft than the regional jets that used to dominate Clinton National. As passenger traffic has grown, instead of adding more flights, airlines have switched, when possible, from regional jets to mainline jets.

"Due to the fact we now have larger aircraft, more 737s and fewer regional jets, this small area is not sufficient to contain the existing aircraft we have," Clarke said.

Diversions also can add to the congestion on the ramp. In March, the latest month for which data were available, Clinton National saw 17 unscheduled arrivals, only three of which were for weather. Often, a taxiway must be closed to park those aircraft, Clarke said.

"We don't have parking for diversions," he said. "This space is just not large enough."

Although airport officials don't have a time line, they eventually plan to replace the 12-gate concourse. They said expanding the ramp also is needed to accommodate that project when it is ready.

"Even if we don't need to expand the terminal, there's enough demand for additional parking that we need to go ahead and do this terminal ramp expansion?" Hurst asked.

Camp was more to the point.

"If it were open right now, would we be using it?" he asked.

"Yes, we would," Clarke replied.

The pavement for the existing ramp and ramp expansion is up to 18 inches thick, according to Shane Carter, spokesman for Clinton National. That thickness is three times the thickness of an interstate to withstand the heavy weights of the airliners.

The project will take about two years to complete because work to rehabilitate the existing ramp will have to be staged in a way that no more than one gate can be closed, which Clarke said was a factor in the high cost of the project. The airlines insisted that only one gate be closed at a time to avoid the prospect of passengers having to exit aircraft on the ramp, Clarke said.