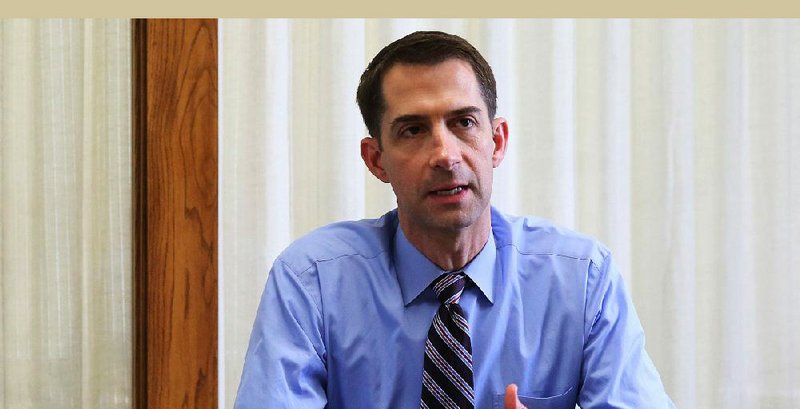 Sen. Tom Cotton, R-Ark., is shown in this file photo.

WASHINGTON -- With a plug from the president and other Republican allies, U.S. Sen. Tom Cotton's new book became a bestseller soon after its release Tuesday.

Sacred Duty: A Soldier's Tour at Arlington National Cemetery, quickly claimed a spot on Barnes & Noble's Top Ten list. Tuesday evening, it was No. 11 at Amazon.com, narrowly outselling copies of The Mueller Report.

Cotton is to return to Arkansas this weekend, with a book signing at 2 p.m. Saturday at the Little Rock Barnes & Noble. A similar event is set for 11 a.m. Sunday at the Sam's Club in Bentonville, a publicist said.

Shortly before flying to Louisiana aboard Air Force One on Tuesday morning, President Donald Trump urged supporters to purchase a copy, telling his 60.2 million Twitter followers: "Our great Senator (and Star) from the State of Arkansas, @TomCottonAR, has just completed a wonderful book, 'Sacred Duty,' about Arlington National Cemetery and the men and women who serve with such love and devotion. On sale today, make it big!"

The book, the Dardanelle Republican's first, tells the story of the 3rd U.S. Infantry Regiment and the well-polished, highly disciplined soldiers who serve in its ranks.

The nation's oldest infantry unit, it was formed in 1784. Since 1948, "the Old Guard" has focused on ceremonial duties, escorting the president and appearing at official state functions, assisting with inaugurations and preparing for state funerals.

Cotton, a graduate of Harvard University and Harvard Law School, enlisted in the Army in 2005, completing combat tours in Iraq and Afghanistan. In between, he served with the regiment at Arlington, acting as an Old Guard platoon leader.

In that role, he assisted with a large number of funerals, offering a final salute to the fallen and to all veterans who are buried there.

After coming to Washington, he decided to tell the Old Guard's story.

"It's not a political book. ... The Old Guard and Arlington is something that transcends politics," Cotton said in an interview with the Arkansas Democrat-Gazette.

While some lawmakers write autobiographies or campaign manifestos, Cotton focused instead on the service members who watch over one of the nation's most sacred sites.

The publisher, William Morrow and Co., initially printed 150,000 copies. The senator is receiving more than $500,000 for writing it.

Cotton, who turned 42 on Monday, began the week by promoting the book on Fox and Friends as well as CBS This Morning.

The conservative news channel largely stuck to the script, focusing its questions primarily on Sacred Duty. (Co-host Ainsley Earhardt did ask Cotton if he plans to run for president one day, telling him "You've got quite a resume." Cotton shared no presidential ambitions.)

But CBS quickly pivoted to tariffs, asking whether Trump's trade war with China would harm Arkansas farmers, among others.

"There will be some sacrifice on the part of Americans; I grant you that," Cotton replied. "But I also would say that that sacrifice is pretty minimal compared to the sacrifices that our soldiers make overseas, that our fallen heroes who are laid to rest at Arlington make."

Cotton, who grew up on a cattle farm in Yell County, said Arkansas farmers are willing to "bear some of those sacrifices in the short term that, hopefully in the long term, ensure our long-term prosperity and security."

On Tuesday, the state party highlighted Cotton's comments in a fundraising email. Accusing Cotton of "mocking farmers who are bearing the brunt" of the trade war, the party asked supporters to donate money to "help us send Cotton packing & protect Arkansas families and their farms."

Arkansas Farm Bureau President Randy Veach said the tariffs have caused real suffering for farmers. He said it was important for the trade dispute with China to get resolved.