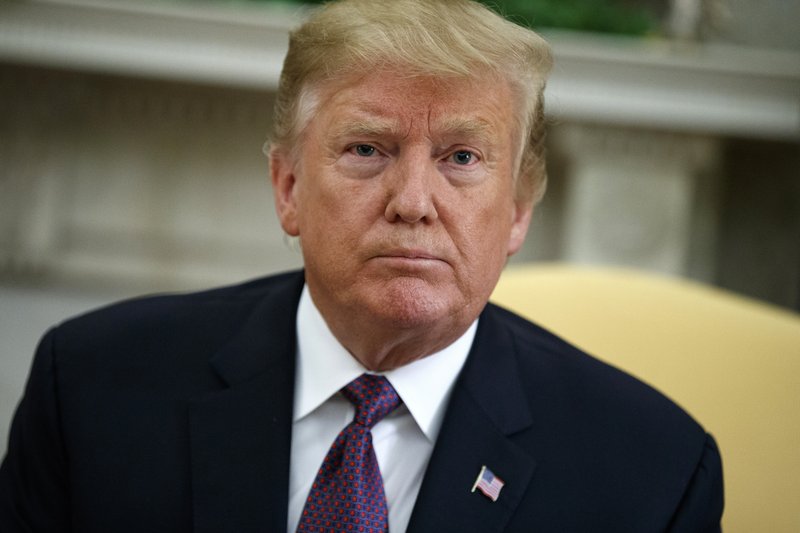 In this May 13, 2019, photo, President Donald Trump listens to a question during a meeting in the Oval Office of the White House in Washington. A federal judge in Washington is set to hold a hearing on May 14 on Trump's attempt to block a House subpoena seeking his financial records. (AP Photo/Evan Vucci)

WASHINGTON -- A federal judge said on Tuesday that he will rule quickly on President Donald Trump's efforts to block Congress from obtaining some of his financial records.

Judge Amit Mehta spent about an hour and a half holding a hearing on Trump's effort to keep financial records from Congress. Mehta did not rule during the hearing whether the House's subpoena of Trump financial records is a valid exercise of legislative power, but he said he would do so "promptly."

The lawsuit before Mehta comes as the White House and the president's attorneys have rebuffed congressional requests for information and records.

Trump, his business and family have also filed a lawsuit in New York against Deutsche Bank and Capital One in an attempt to block subpoenas from the House Financial Services and intelligence panels seeking their banking and financial records. A hearing in that case is set for May 22.

Democrats also have issued subpoenas for six years of Trump's tax documents and given Treasury Secretary Steve Mnuchin and IRS Commissioner Charles Rettig a deadline of Friday to deliver them. Mnuchin had previously refused House Ways and Means Chairman Richard Neal's request for the tax documents.

In the case before Mehta, Trump and his business organization sued the House Oversight Committee in April in an attempt to block a subpoena issued to Mazars USA, an accountant for the president and Trump Organization. Trump's lawyers argued the subpoena "has no legitimate legislative purpose" and accused Democrats of harassing Trump and wielding their new majority in Congress to try to stain the president's standing.

But House lawyers told the judge that the Constitution gives Congress broad powers to investigate and that it doesn't need to tie an investigation it is undertaking to a specific piece of legislation it is considering.

Mehta, who was nominated to his position by President Barack Obama, suggested during the hearing that Congress has wide latitude to investigate. He told Trump lawyer William Consovoy that there isn't a case since 1880 where the Supreme Court or an appeals court found that Congress overstepped its boundaries in issuing a subpoena.

Douglas Letter, an attorney for the House, told the judge that "President Trump has no chance of success here." And he said Trump has taken the position that Congress is "just getting in his way" of running the country.

Mehta did suggest to Letter that the subpoena does seem to be an effort to get into Trump's private affairs. And he asked Letter whether there are any limits on what Congress can obtain. Letter acknowledged that there are some outer limits, suggesting a request for the president's blood or his diary from when he was a child might be too extreme. But he said the subpoena for financial records is clearly permissible.

The judge seemed to be looking to resolve the case quickly, though he said he would accept additional materials this week.

"We're not going to drag this out," he said.

Consovoy indicated near the end of the hearing that his client would appeal if the judge ruled against him.

Meanwhile, the top Democrat on the Senate Finance Committee, Ron Wyden, sent letters to Mnuchin and Rettig demanding information on the Treasury Department's refusal to turn over Trump's tax documents.

In the letter to Mnuchin, dated Tuesday, Wyden wrote that Mnuchin is "taking unprecedented steps that seriously undermine the ability of the congressional tax-writing committees to obtain tax return information necessary to the performance of their legislative duties."

He cited other instances where congressional committees did receive tax information, including on issues related to defunct nonprofit ACORN and to tea party groups, as evidence that Mnuchin's decision to withhold the returns is unprecedented.

Wyden demanded that Mnuchin and Rettig provide information on any times the IRS rejected committees' requests for returns as well as correspondence and other documents related to Mnuchin's decision to reject Neal's request.

The Treasury Department didn't immediately respond to a request for comment.

A century-old law gives the congressional tax-writing committees the powers to request the tax information of any taxpayer, though some legal scholars believe such a request requires a legislative purpose.

Wyden gave Mnuchin and Rettig until May 28 to respond to his questions.

Information for this article was contributed by Jessica Gresko and Mary Clare Jalonick of The Associated Press; and by Joe Light of Bloomberg News.