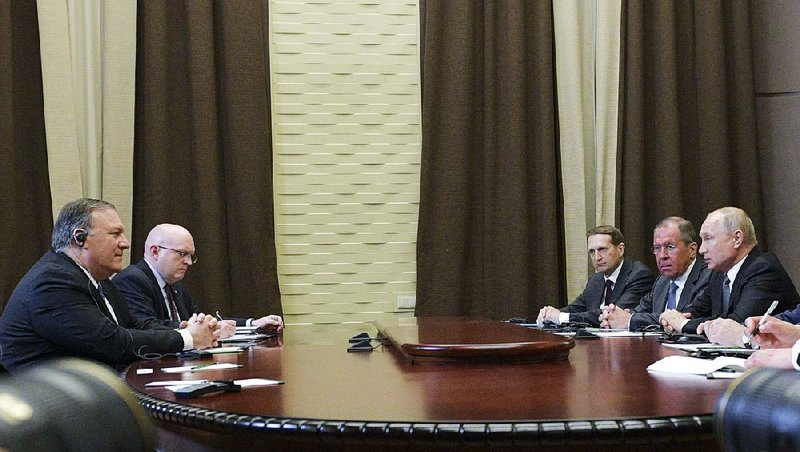 "There are places that our two countries can find where we can be cooperative, we can be productive, we can be accumulative, we can work together to make each of our two peoples more successful and, frankly, the world more successful, too," Secretary of State Mike Pompeo told Russian President Vladimir Putin at the start of their meeting in Sochi. "President [Donald] Trump wants to do everything we can."

On Iran, Venezuela, and Russian interference in U.S. elections, Pompeo and Russian Foreign Minister Sergey Lavrov voiced sharp disagreement at a joint news conference. Still, Pompeo's first trip to Russia as secretary of state represented a new attempt by the Trump administration to find fresh footing in the strained relationship.

After several hours of talks between Pompeo and Lavrov -- and another 90 minutes between Pompeo and Putin -- Kremlin foreign policy adviser Yury Ushakov praised Pompeo for holding a "not bad, concrete conversation." The United States had joined Russia in showing an interest, he said, in "starting to correct the relationship and gradually restoring communication channels."

Trump has voiced a desire since his presidential campaign to cooperate with Russia on global challenges.

Now, with the investigation closed by special counsel Robert Mueller into Russian election interference, both the White House and the Kremlin see a new opportunity to reset ties.

"For all of special counsel Mueller's exotic work, he carried out an impartial investigation and confirmed the lack of any trace and any collusion between Russia and the acting administration -- which we from the very beginning characterized as utter nonsense," Putin told Pompeo at the start of their meeting. "This was one of the reasons for the worsening of our interstate ties. I hope that today, the situation is changing."

Pompeo said he had raised the issue of Russian election interference, but Putin again denied that it took place.

"There are things that Russia can do to demonstrate that those kinds of activities are a thing of the past," Pompeo said. If Russia were to interfere again in the 2020 U.S. election, Pompeo said, "it would put us in an even worse place."

With global tensions rising over Iran -- a Russian ally -- Lavrov said Russia was prepared to do what it could to avoid "a war scenario." The United States has warned of an increasing threat from Iran and has dispatched additional forces to the region.

"We're looking for Iran to behave like a normal country," Pompeo said, one that does not sponsor terrorism and assassinations and develop offensive weapons.

"We fundamentally do not seek war with Iran," he said. "We have also made clear to the Iranians that if American interests are attacked we will most certainly respond in the appropriate fashion."

On Venezuela, Lavrov and Pompeo showed no sign of budging from opposing sides in that country's crisis.

The U.S. is firm in its commitment to support opposition figure Juan Guaido as Venezuela's legitimate leader and Russia equally firm in its backing of embattled President Nicolas Maduro.

Pompeo and Trump's national security adviser John Bolton have repeatedly accused Russia, along with Cuba, of propping up Maduro and demanded that Russian and other foreign troops, intelligence officers and security forces leave the country.

But Lavrov criticized Guaido for asserting that he had a right to invite U.S. officials to intervene. "Russia is in favor of the people of this country determining its future," he said.

"On Venezuela, we have disagreement," Pompeo said. "We want every country that's interfering in Venezuela to cease doing that."

But Pompeo also named regions where he saw potential for the United States and Russia to work together more closely.

"Some of our cooperation has been excellent, on North Korea, on Afghanistan," Pompeo told Putin. "We've done good work, counterterrorism work together. These are things we can build upon."

Lavrov said Russia does support negotiations over nuclear disarmament with North Korea. But although Putin met with the North's leader, Kim Jong Un, last month, Lavrov offered no suggestion that the stalemate in nuclear talks would break anytime soon. "We are ready to support that dialogue," he said.

In an apparent example of the Trump administration's readiness to move past some points of disagreement, the biggest source of U.S.-Russian tensions during President Barack Obama's term didn't come up in Tuesday's talks, according to Kremlin aide Ushakov.

"There was no Ukraine at all," Ushakov said.

A key test for Russia and the United States' ability to cooperate will revolve around nuclear arms control. Pompeo said in the news conference that Trump remains interested in bringing other countries, including China, into an arms-control framework -- an idea that has drawn skepticism in Moscow.

Before meeting with Pompeo, Putin examined a new hypersonic, nuclear-capable missile system at a southern Russian defense plant. The Kremlin insisted that the visit was coincidental.

The United States backed out of a Cold War-era treaty with Russia limiting short- and medium-range ground-based missiles this year, citing Russian violations.

Russian officials, meanwhile, have said they are eager to extend the New START accord, governing U.S. and Russian strategic nuclear weapons, which expires in 2021. Pompeo was noncommittal after his talks with Lavrov when asked whether the United States was prepared to extend the treaty.

"We will gather together teams that will work not only on New START and its potential extension but on a broader range of arms-control initiatives," Pompeo said.

Pompeo's trip comes amid a flurry of new talks between Moscow and Washington. Lavrov and Pompeo previously met in Finland earlier this month, and Trump and Putin recently spoke by phone for more than an hour.

"I had the impression that the president intends to rebuild U.S.-Russian relations and contacts in order to solve issues of mutual interest," Putin told Pompeo, referring to the call with Trump. "We also would like to rebuild fully fledged relations and I hope that right now, a conducive environment is being built for that."

But Russia's optimism remains guarded. Trump said on Monday that he would meet Putin in person on the sidelines of the Group of 20 summit in Japan in June. Kremlin spokesman Dmitry Peskov, however, said on Tuesday that a formal request from the White House for such a meeting has yet to arrive, and he noted that Trump canceled a meeting just before the two presidents were scheduled to meet in December.

"We, of course, heard President Trump's statement that he expects to hold a meeting with President Putin," Lavrov said in the news conference. "If such a proposal officially arrives, then we will of course respond to it affirmatively."

Information for this article was contributed by Anton Troianovski of The Washington Post; by Jim Heintz, Francesca Ebel, Nataliya Vasilyeva and Matthew Lee of The Associated Press; and by Andrew E. Kramer and Richard Perez-Pena of The New York Times. 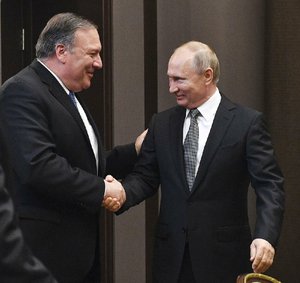