“This is ridiculous, it would make the president above the law, and of course we totally reject it,” House Judiciary Committee Chairman Jerrold Nadler said Wednesday of the White House counsel’s letter.

WASHINGTON -- The White House's top lawyer told the House Judiciary Committee chairman Wednesday that Congress has no right to a "do-over" of the special counsel's investigation of President Donald Trump and refused a broad demand for records and testimony from dozens of current and former White House staff members.

White House Counsel Pat Cipollone's letter to committee Chairman Jerrold Nadler constitutes a sweeping rejection -- not just of Nadler's request for White House records, but of Congress' standing to investigate Trump for possible obstruction of justice. In his letter, Cipollone said Congress is not a law enforcement body and does not have a legitimate purpose to investigate the questions it is pursuing.

But Cipollone stopped short of asserting executive privilege. Instead, he told Nadler he would consider a narrowed request if the chairman spells out the legislative purpose and legal support for the information he is seeking.

"Congressional investigations are intended to obtain information to aid in evaluating potential legislation, not to harass political opponents or to pursue an unauthorized 'do-over' of exhaustive law enforcement investigations conducted by the Department of Justice," Cipollone wrote.

In an interview, Nadler called the White House argument "preposterous."

"The White House is making the outrageous claim that a president cannot be held accountable in any way to the American people," he said, adding: "This is ridiculous, it would make the president above the law, and of course we totally reject it. We will subpoena whoever we have to subpoena."

He said, for the first time, that the committee was seriously considering "very large" fines for witnesses who do not comply.

Cipollone said the release of special counsel Robert Mueller's report now makes Congress' questions moot. He stressed that probe was "exhaustive" -- the product of 2,800 subpoenas, 500 executed search warrants and 500 witness interviews -- and that the president supported the report's release "in the interest of transparency."

"The appropriate course is for the Committee to discontinue the inquiry," he wrote. "Unfortunately, it appears that you have already decided to press ahead with a duplicative investigation, including by issuing subpoenas, to replow the same ground the Special Counsel has already covered."

Mueller did not find a criminal conspiracy between Trump's campaign and Russia in the 2016 election. He did not rule on whether Trump obstructed justice, although Attorney General William Barr said the report shows that the president did not.

The White House's firm stand represents another escalation in the standoff between the White House and House Democrats. Trump and his allies are working to block more than 20 separate investigations into his actions as president, his personal finances and his administration's policies, according to a Washington Post analysis.

Nadler in early March requested documents from 81 Trump allies or Trump-related entities as part of a broad investigation into whether Trump abused his power, obstructed justice and engaged in public corruption.

The letters went to both current and former official and campaign staff members as well as top Trump Organization officials and Trump's family members.

Joshua Geltzer, a former Justice Department official who now heads a constitutional advocacy group, said the White House's assertion that Congress does not have a right to the information is a "mind-blowing" claim.

"These aren't peripheral interests of the U.S. Congress," he said. "They're core oversight responsibilities -- at the heart of our legislative branch checking our executive branch and even just understanding it."

In the Wednesday letter, Cipollone argued that the request for testimony and records from 81 individuals and agencies is intrusive and seeks to pull back the covers on reams of confidential discussions and sensitive law enforcement material that is normally shielded by executive privilege.

The White House counsel's office said its objection applies to current and former officials whose information it argues is technically the property of the White House.

At least two of the people who received requests for information from the committee said Wednesday that they were not going to provide any documents or information while the White House objects to such cooperation. They said they fear getting on the wrong side of Trump -- and the professional damage it could cause.

"What choice do you have?" said one of these people, a former senior White House official who requested anonymity to describe the strategy toward handling the congressional demand.

The president's eldest son, Donald Trump Jr., agreed Tuesday to a limited interview next month with the Republican-led Senate Intelligence Committee. Democrats are also seeking Mueller's testimony, though a date has not been set.

Democrats are also clashing with the administration over access to Mueller's full report. Trump for the first time earlier this month invoked the principle of executive privilege, claiming the right to block lawmakers from the unredacted document about Russian interference to help Trump in the 2016 election.

The Judiciary panel voted to hold Barr in contempt of Congress after he defied its subpoena for the unredacted report. Another contempt resolution could be coming soon after the House Intelligence Committee issued a separate subpoena, also for the unredacted version. The deadline for the Justice Department to comply was Wednesday.

Cipollone said Nadler's committee has been eager to try to publicly tar the White House as uncooperative, pushing to hold officials in contempt, while ignoring the legal flaws in its demands.

"[T]he Committee rushed to vote on contempt for failing to provide 100% and immediate compliance with a subpoena that seeks millions of pages of documents from a prosecutor's files," he wrote. "Moreover, the Committee -- for the first time in American history -- has voted to recommend that the Attorney General be held in contempt because he refused to violate the law by turning over grand-jury materials that he may not lawfully disclose."

Information for this article was contributed by Carol D. Leonnig, Josh Dawsey and Rachael Bade of The Washington Post; and by Jonathan Lemire, Catherine Lucey and Mary Clare Jalonick of The Associated Press. 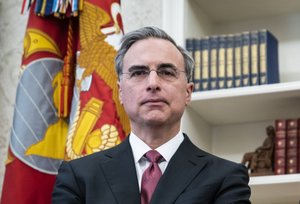