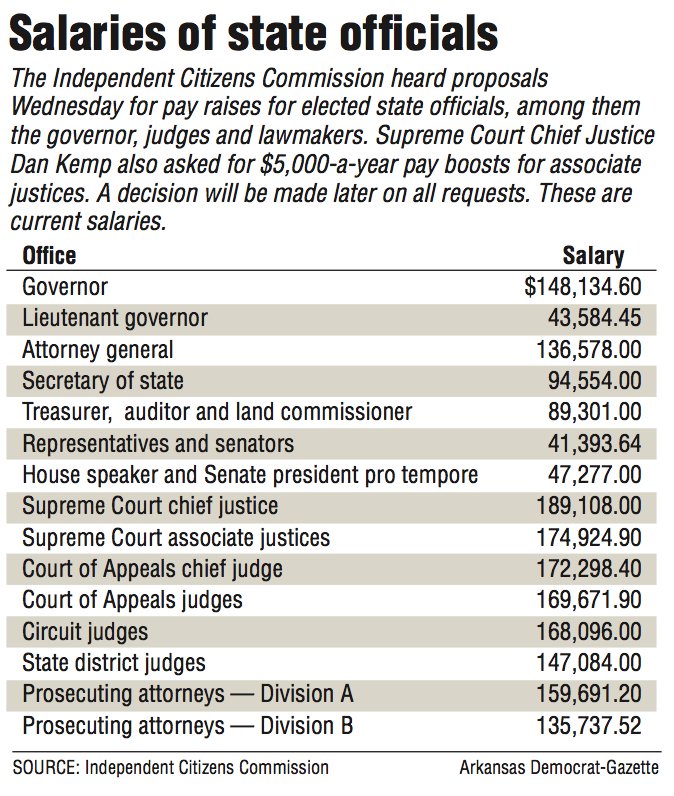 The Independent Citizens Commission -- created by Amendment 94 to the Arkansas Constitution in 2014 to set the salaries of state elected officials -- didn't take action on any salary requests at its Wednesday meeting, but it did review letters from the Arkansas Judicial Council, Arkansas District Judges Council and Arkansas Chief Justice Dan Kemp.

The District Judges Council's letter requested the same percentage pay raise as all state employees. State agencies, according to a May 8 Department of Finance and Administration memo, will receive 2.4% increases to their annual salary budgets. However, those raises will be distributed on a pro-rated basis to employees based on performance evaluations.

The Judicial Council -- consisting of all 121 circuit judges, 12 Court of Appeals judges, seven Supreme Court justices and retired members of those courts -- asked the commission to approve 3% salary increases to keep pace with the cost of living.

Additionally, Kemp, in a letter, requested additional $5,000 raises for associate justices to get the high court's pay closer in line with state circuit and appeals court judges as it relates to nationwide rankings.

Citing the 2019 National Center for State Courts report on judicial salaries, Kemp said the pay scale for Arkansas' associate justices ranks 26th among state supreme courts in the U.S. Meanwhile, the report found that Arkansas Court of Appeals and circuit judges' salaries rank 18th and 16th, respectively, among comparable courts in other states.

"This $5,000 increase for the associate justices would result in their salary being more comparably ranked with Arkansas circuit and appellate judges in the nationwide rankings," the chief justice wrote. Kemp, who is paid more than associate justices, would not receive the $5,000 raise if the raises are approved.

In addition to judges, the Independent Citizens Commission sets the pay schedules for state constitutional officers, prosecuting attorneys and members of the state House of Representatives and Senate.

Last year, the commission approved 3 percent raises for all state elected officials at a total cost of about $1.23 million.

The report does not adjust each state's salary level based on the local costs of living for state supreme courts, but it does provide an adjusted total for general jurisdiction judges -- the equivalent of circuit judges in Arkansas. Accounting for the cost of living, Arkansas' circuit judge salaries were the second-highest in the U.S., trailing only Tennessee, the report said.

It's the third-straight year that Kemp has asked the commission to consider the "imbalance" in the state's judicial branch pay structure. In 2017, Kemp requested an 11% raise for all Supreme Court justices to get their salaries more in line with neighboring states. Last year, he asked the commission to consider increases in the justices' salaries, mileage reimbursement or per-diem allowances to remove some of the parity that existed between the compensation packages of justices and lower court judges.

The commission has not given any separate raises or benefits boosts to the Supreme Court beyond the salary bumps for all elected state officials in the past two years. It gave no raises in 2016.

Commissioner Chuck Banks, a Little Rock attorney who was elected commission chairman Wednesday, said the body will hear from state economists before deciding on any pay raises for state officials. Its next meeting will be on a date to be determined during the latter half of July.

Commissioners didn't have any questions for Kemp or the other judges present at Wednesday's meeting. However, retired Supreme Court Justice Annabelle Imber Tuck, who is a commission member, did ask Kemp to provide a copy of the report on court salaries in other states.

Crittenden County Circuit Judge John Fogleman, president of the Arkansas Judicial Council, said the council's board authorized him to request the "modest" 3% raise.

"We submit that current economic conditions both nationally and within this state fully support such a request," Fogleman wrote.

No state lawmakers, constitutional officers or prosecutors requested raises in writing or at Wednesday's meeting.

The commission has received some push-back from constitutional officers in past years who said they didn't want to receive pay increases.

The commission honored Lt. Gov. Tim Griffin's request in 2017 to be excluded from the raises for state officials, but last year, the panel raised Griffin's pay from $42,315 to $43,584, despite his request to again be excluded. The lieutenant governor is the only constitutional officer considered part time.