Third turn at the old ultra-violence better than one could expect by PIERS MARCHANT Special to the Democrat-Gazette | May 17, 2019 at 1:45 a.m. 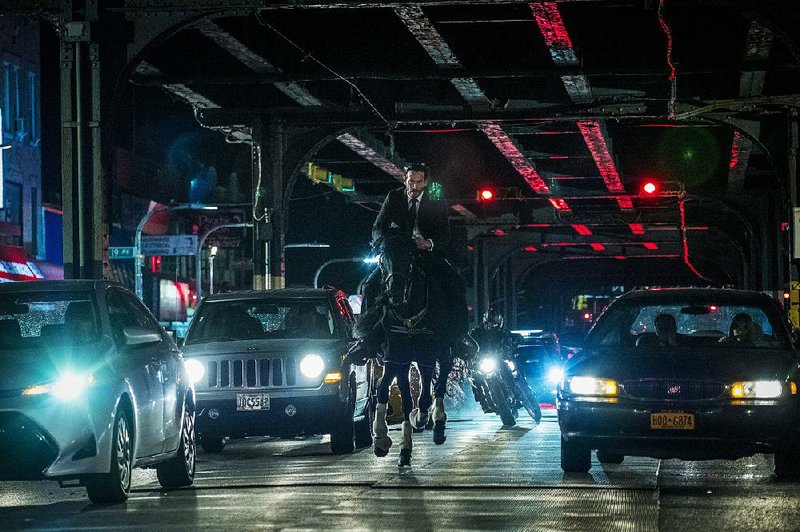 Near the beginning of Chad Stahelski's third John Wick film, a spinning ballerina is featured on an otherwise empty stage, twirling again and again under the command of a driving taskmaster (played by Anjelica Huston). Historically in action movies, highly touted international assassins were almost always portrayed as similarly lithe, controlled, and artistic in their skill set. But one of the central conceits of Stahelski's films is to portray its hero killer, Wick (Keanu Reeves), as almost anything but smooth. He kills incredibly effectively, but more out of a kind of brute survival instinct than slick opportunism. He's not a death artiste, he's a blunt force of nature with a high-caliber gun.

It helps that Reeves' own natural body language is so hinky: Even his running is a kind of awkward lurch from side to side. This plays directly into Stahelski's style, which is all close quarters combat, tight on the stunt-work, while eschewing body doubles. Like fellow director David Leitch, who worked with him on the first Wick film before shooting the equally ferocious Atomic Blonde, this approach grounds the violence in something resembling authenticity -- at least in terms of the amount of damage inflicted on the heroes. They might mow through a band of assailants, but they aren't coming out unscathed. Gone are the slick, smirking killers of yesteryear -- Angelina Jolie's turn in Salt, for example, where every battle was a fait accompli -- and in their place are wounded, nearly broken warriors just trying to make it down the stairway alive.

Rating: R, for pervasive strong violence, and some language

Indeed, when we first see Wick in this film, it's mere moments since the end of John Wick 2, in which he has run afoul of the Intercontinental Hotel, where all the best assassins stay in New York, along with its hotel manager, Winston (Ian McShane), and the fabled Table itself, the all-powerful organization that oversees the assassins guild and sets the stringent rules of conduct to which every member must strictly adhere. Given a matter of minutes before a bounty is officially put on his head by the organization, Wick must navigate waves of would-be killers en route to his planned escape.

By the time he gets out of New York, and shoots over to Morocco, the film has already left a distinctive trail of dismembered bodies. From there, he hooks up with Sofia (Halle Berry) an old comrade, and the two of them, along with her two fierce German Shepherds, attempt to get a meeting with an emissary of the Table to talk things over, a move as with almost everything else in this film, that ends in protracted violence.

Amusingly, the series has always been based around dogs, but here, it pays homage to our furry friends not with another sweet, innocent mutt, a la Wick's handsome boy, but via a pair of heat-seeking missiles in the form of the GSDs, who help Wick and Sofia lay waste to several dozen men with an impressive array of brutal tear downs, leaping tackles, and many crotch rippings (the scene ends with a physics-bending maneuver by one of the pooches so stunning the audience was practically lifted out of its collective seat). All of which, eventually helps Wick to meet the grand poobah of the Table (Said Taghmaoui) somewhere in the Sahara, an encounter that allows him to return to New York in order to take out his old friend Winston.

At its best, the Wick films offer a visual, violent fantasia, with the indefatigable Wick dispatching hitman after hitman in often comically creative ways. Here, the film's climactic battle pits him against Zero (Mark Dacascos), a suave samurai, who moves effortlessly and with complete precision. That Wick can eventually defeat him -- and, in some ways, even more unlikely, can take down Zero's equally skilled minions, including The Raid Redemption's Yayan Ruhian -- is the most fantastical element of all. Wick spends half of every fight getting his butt handed to him before finally turning the tables, like the star wrestler eventually coming around to suplex the mook before getting the pin.

This is more or less in keeping with Wick's unconventional motivation to come out of retirement in the first place -- the killing of his dog -- which also helps separate the Wick films from the pack of similarly violent action fare. As much as the series enjoys the occasional tongue-in-cheek flourish (an early battle in an antique arms museum plays with a finely orchestrated comic timing), it is first and foremost a bloody testament to hostility and stated overkill: Wick will never use a single bullet to the head of an adversary when four will better make his point.

With his stringy hair and uneven beard, Reeves is like Neo gone to seed (playing off that, the film impishly re-utilizes one of his best-known lines from The Matrix), a device that enables him to make Wick more sympathetic, less an unstoppable killing machine than a wounded man barely stumbling past one foe before being engaged by another.

Even if the series' other major conceit -- that the assassins' guild is guided and maintained by a bureaucracy housed in a florescent-lighted office, populated by a pierced and tattooed staff, utilizing supplies straight from War Games-era tech (Wick's decommissioning and bounty are added to a giant chalkboard) -- has lost some of its luster, with this film, you can't say head screenwriter Derak Kolstad, working with a team of others, has just re-made the same film over and again. In fact, despite the pretentiousness of the title (how many films need a colon and a dash?), the film actually does play like another section in a longer vision. 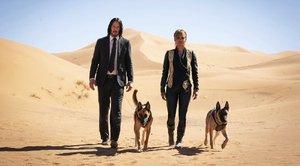