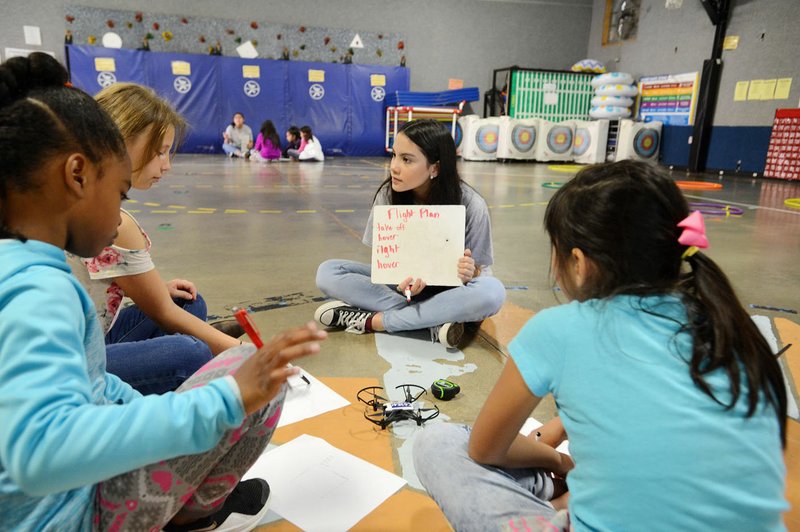 NWA Democrat-Gazette/SPENCER TIREY Madelyn Xaysanasy, a student at Don Tyson School of Innovation, teaches girls at Parson Hills Elementary how to program a drone Thursday. Female students at Tyson School of Innovation have been mentoring female elementary students how to program drones. Their initial goal was to work with 300 students but at Parson Hills they will top more than 1,000 students.

SPRINGDALE -- Girls at the Tyson School of Innovation not only are learning how to program and fly drones, they're going into elementary schools to teach younger girls how to do it as well.

"Coding Takes Flight" is run by several female students at the School of Innovation. Following a visit to Parson Hills Elementary School on Thursday, they've now given drone and coding lessons to more than 1,000 girls across the Springdale School District since the program launched last fall.

"This program was created by female students, for female students, and it has given those girls, third- through fifth-graders, an opportunity to see what is out there as far as potential careers," said Wade Ward, a drone instructor and EAST facilitator at the School of Innovation.

The program started as an EAST project. EAST, which stands for education accelerated by service and technology, allows students to do projects that benefit their community through technology.

Ward got the program started, but since then, it's been entirely run by his students, he said. Their work included creating a curriculum that matches what students in elementary school need to be learning.

The School of Innovation is for sixth- through 12th-graders. Thursday's group of six instructors at Parson Hills included four 11th-graders and two sixth-graders.

Each one sat on the gymnasium floor with a few elementary students showing them how to code a drone to perform certain flight patterns. They did some measuring to figure out how to make the drone fly from one hula hoop to another.

"So a lot of measuring, a little bit of math, some principles of science concepts, and then they're also learning some basic drone concepts that I teach my first-year drone students," Ward said.

Abby Herrera, 16, is a junior at School of Innovation and is taking Ward's unmanned aerial systems class. She intends to travel to Tulsa, Okla., next week to take the test to obtain her drone pilot license. She's been heavily involved in Coding Takes Flight, serving as a mentor during at least 10 sessions, she said.

They tried a session that included both boys and girls. The boys were trying to take control of everything and the girls allowed it to happen, she said.

"So the reason we're doing it with just girls is to build their confidence so when they're in a situation like that, they understand what's happening," Herrera said.

Herrera is passionate about steering girls toward fields related to science, technology, engineering and math -- commonly referred to by the acronym STEM.

"We've learned when we have more women involved in STEM, not only does it benefit them, but it benefits the community," she said.

Riley Berry, a fourth-grader at Parson Hills, said she enjoyed the drone lesson and wants to learn more about the subject.

"I want to do this every day," she said.

Riley, 9, said it was "more fun" learning from a high school student than from an adult. When pressed to explain why, she said, "They're not as old. They're not, like, a thousand years older than me."

Some are just a few years older. Madelyn Xaysanasy, 12, is a sixth-grader at the School of Innovation. She was invited to join Coding Takes Flight in January.

"I started because I really love seeing the young learners get excited about things," Madelyn said. "And since they're not really shown these opportunities as young females, it's really fun to see them be like, 'Yeah, I can do this. It's not just my older brother who can do it.'"

Ward said Coding Takes Flight is especially important for a school district like Springdale, where the majority of students qualify for free and reduced-price meals, a common measure of a district's poverty rate.

"These kids need to see those positive influences. They need those role models," he said.