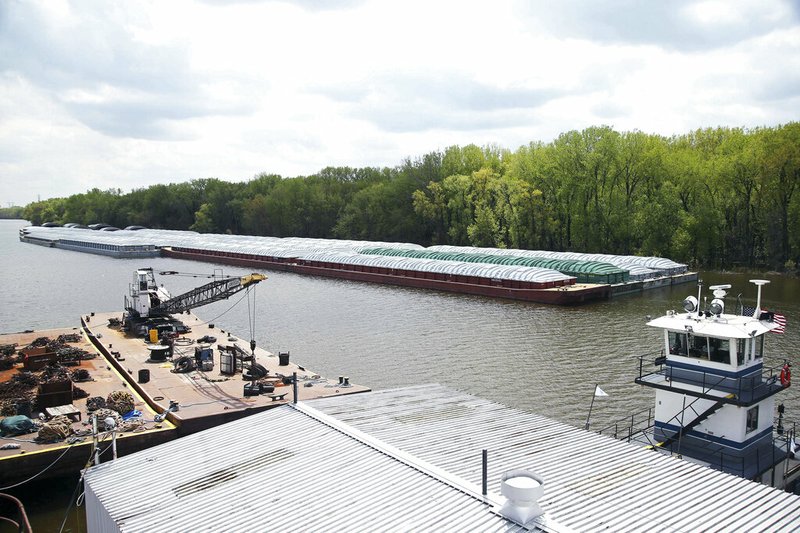 In this Tuesday, May 14, 2019 photo, barges already loaded with soy beans, potash or scrap steel await movement on the Mississippi River in St. Paul, Minn., as spring flooding interrupts shipments on the river. Historic Midwest flooding that began in March has left parts of the Mississippi River closed for business.

OMAHA, Neb. — Normally this time of year, huge barges can be seen chugging up the Mississippi River, carrying millions of tons of grain to market and bringing agriculture-related products to farmers in the Midwest for the new growing season. But there's not much barge traffic this year.

That's because historic spring flooding that swamped and tainted farmland, also left parts of the Mississippi closed for business.

The river, which runs nearly 2,350 miles from Minnesota's Lake Itasca to the Gulf of Mexico, is a main conduit of shipping everything from agriculture products and construction material to petroleum and coal. The troubles on the Mississippi also have affected shipping on the waterways that feed into it, including the Missouri River.

The interruption is hitting an agriculture industry that's already suffering from a plethora of ills, including the Trump administration's trade disputes that have helped drive down commodity prices.

"You've got a perfect storm here," said Kenneth Hartman Jr., who grows corn, soybeans and wheat just south of Waterloo, Illinois. "It looks bad for us."

Like other farmers in more than a dozen states in the Mississippi River basin, Hartman would normally be sending soybeans, corn and other grain harvested last fall down the river, where it would eventually be exported — likely to China. Meanwhile, shipments of fertilizer that normally travel up the river to communities from St. Louis to St. Paul, Minn., haven't made it through.

The inability to get the grain down the river has exacerbated a shortage of space for those products.

"You have elevators that aren't even taking grain right now," Hartman said. "So that's causing issues as far as selling our grain in a timely manner." 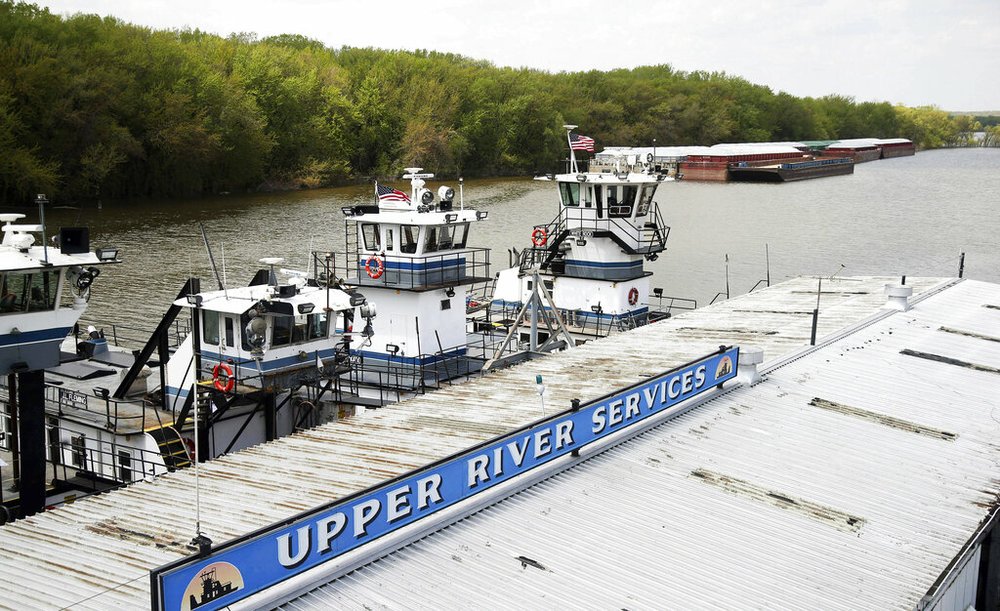 In this Tuesday, May 14, 2019 photo, empty barges, background right, are moored at the Upper River Services along with tug boats on the Mississippi River in St. Paul, Minn., as spring flooding interrupts shipments on the river. Historic Midwest flooding that began in March has left parts of the Mississippi River closed for business.

Many of the locks and dams on the Mississippi that closed due to flooding that started in March have reopened, but the U.S. Army Corps of Engineers doesn't expect the river to be fully unimpeded until possibly June.

Even if the locks were open, "many of these barges wouldn't be able to get here anyway," said Sam Heilig, a Corps spokeswoman at Rock Island, Illinois. "Because the water's so high, there's not enough clearance to get under some of the bridges."

For now, it's impossible to put a number on how much the interruption has cost shippers, farmers and manufacturers. But Debra Calhoun, spokeswoman for the Washington-based advocacy group Waterways Council, said there's no doubt it's having an impact.

On average, nearly 31 tons of goods and commodities are shipped on the upper Mississippi River from March through May, according to a five-year average gauged by the Corps' Waterborne Commerce Statistics Center. The biggest slice of that, at nearly 11 million tons, is grain, followed by coal, sand and gravel and chemicals and petroleum products. Annually, about $250 million in domestic goods are shipped on the Mississippi, according to the center.

The Missouri River has remained mostly navigable right up until it meets the Mississippi River at St. Louis, said James Rudy with the Corps' Kansas City office. While that allows shipping from point-to-point, it still disrupts shipments from farmers in South Dakota, Nebraska, Iowa, Kansas and Missouri seeking to get their grain to exporters in the Gulf of Mexico, he said.

The Missouri River has far less barge traffic than the Mississippi, but it still sees on average more than 1.3 million tons worth nearly $63 million shipped from March through May, according to the Corps.

The interruption in river traffic has a domino effect on other industries, particularly in transportation. The National Waterways Foundation estimates that one 15-barge tow on the Mississippi River can ship as much as six locomotives pulling 216 railcars, or as much as 1,050 large semitrailers. It also costs less to ship via the river, because barges can hold so much more and be moved using less fuel.

"One of our Missouri River navigators notes that his business on the Missouri alone removes somewhere from 60,000 to 80,000 tractor-trailers off of I-70 every year," Rudy said.