Lori and Chris Carney of Ward are the parents of the groom. He is the grandson of Robert and the late Gloria Hood of Pollock, La., and the late Sylvia and Peter Carney of Alexandria, La.

The chancel held an urn arrangement of ivory and blush hydrangeas, peonies and snapdragons. Music was by organist Stanley Cox and vocalist Nancy Greer, who sang "How Great Thou Art."

The bride, given in marriage by her mother, wore a sleeveless gown of Italian duchess silk-satin with a deep V-neckline and back. A large bow at the back secured a detachable train. She carried a hand-tied bouquet of roses, ranunculus, peonies, silver dollar eucalyptus and olive leaves.

Matron of honor was Sarah Atkins of Dallas. Bridesmaids were Jessica Carney of Jonesboro, sister of the groom; Paige McFadden, Nikki Duncan and Anne Katherine Dake, all of Little Rock; Emily Gates of Sunbury, Ohio; and Kristen McCaslin of Fayetteville. They wore black chiffon A-line gowns with ruched bodices and carried bouquets of ivory wedding flowers.

Flower girl was Wrigley Myers of Little Rock, cousin of the bride.

Jeff Carney of Alexander was his brother's best man. Groomsmen were Sam Patterson of Stuttgart; John Segars of Gillett; and Will Gunnell, Spencer Gunnell, Michael Ferguson and Casey Smith, all of DeWitt. Guests were seated by Britton Strain of Little Rock; Tyler Atkins and Taylor Lasiter, both of Dallas; and Raphael Rattler of Prosper, Texas.

The bride is a graduate of the University of Arkansas, Fayetteville, with a bachelor's degree in marketing. She is a digital marketing and social media coordinator for Arkansas Blue Cross and Blue Shield.

The groom has bachelor's degrees in engineering and civil engineering from Arkansas State University. He is a structural engineer at Michael Baker International.

After a honeymoon in Punta Cana, Dominican Republic, the couple will reside in Little Rock. 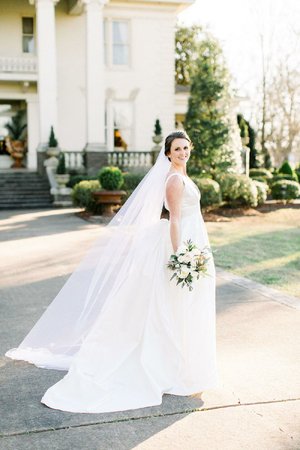