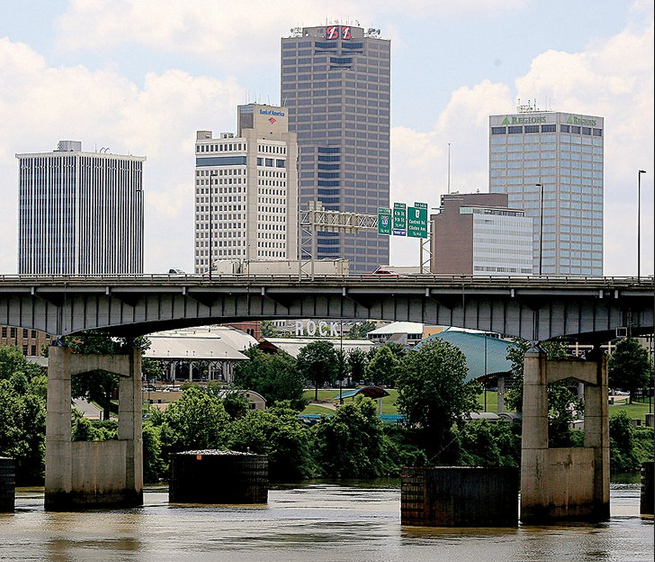 Traffic moves over the Interstate 30 bridge between Little Rock and North Little Rock in this June 19, 2014 file photo. ( Staton Breidenthal)

An environmental review underpinning the rationale for the $631.7 million project to remake the Interstate 30 corridor through downtown Little Rock and North Little Rock is so flawed that the project should be scrapped until a more rigorous review that meets federal requirements is undertaken, according to a lawsuit filed Monday.

A coalition of neighborhood groups and residents brought the lawsuit in U.S. District Court against the Federal Highway Administration and the Arkansas Department of Transportation. The case was assigned to U.S. District Judge James Moody Jr.

The lawsuit was filed to allow the plaintiffs to obtain "critical information" about a "great many things we couldn't get them to analyze," Wells said in an interview.

"We need to get an environmental impact statement where this is thoroughly scrutinized and then we need to follow the regulations that brings this back to the public for review and comment."

Scott Bennett, the director of the state Transportation Department who is a defendant in the lawsuit, declined to comment when reached Monday evening just before boarding a flight to Salt Lake City. Agency officials have made it a practice of not speaking on pending litigation.

The lawsuit was filed by Richard Mays, a lawyer with the Little Rock law firm of Williams & Anderson, and who specializes in environmental law.

"Challenging an environmental assessment is to require a closer look at the issues that are involved in the project and to make sure they are making the best informed decisions that they can," he said. "It's pretty obvious to me that the Highway Department had its mind made up ... about what they wanted and they had not varied from that. They haven't really adequately taken a hard look at the situation.

The lawsuit, among other things, challenges the department's "purposes and need" for the project, which assumes people always will commute from the suburbs to downtown Little Rock and North Little Rock; and the department's rejection of alternatives, such as more robust public transit or other ways to get into and out of the downtowns without using I-30.

"We think there are better ways to relieve congestion on I-30 rather than expand it to a monster size," Mays said.

It is the second lawsuit Mays has filed against the Transportation Department in recent months.

He represented five Little Rock residents who sued the agency last July seeking to stop an $87.3 million project to widen a section of Interstate 630 in west Little Rock.

That lawsuit contended that the department and the Federal Highway Administration failed to comply with the National Environmental Policy Act by misclassifying the project to categorically exclude it from more detailed analyses of the project's impact on the environment, such as is required in an environmental assessment or environmental impact statement.

That case also landed before Moody, who found that the plaintiffs were unable to "demonstrate they will likely suffer irreparable harm if the I-630 project continues," which is the legal standard required to prevail in seeking a preliminary injunction to stop work on a project.

"The Court is aware that a violation of [the National Environmental Policy Act] itself is evidence of a real environmental harm," Moody wrote. "In this case, however, there has not been a showing that plaintiffs are likely to prove defendants violated NEPA."

Moody's decision has been appealed to the 8th U.S. Circuit Court of Appeals in St. Louis.

A separate lawsuit over both the I-630 project and 30 Crossing is pending before Pulaski County Circuit Judge Chip Welch.

The circuit court lawsuit claims a "plain reading" of Amendment 91 to the Arkansas Constitution, which governs a significant amount of spending under the Arkansas Department of Transportation's $1.8 billion Connecting Arkansas Program, limits funding to improvements to four-lane highways or two-lane highways being widened to four lanes.

The I-630 project is widening a 2.2-mile section in west Little Rock to eight lanes from six at a cost of $87.4 million.

It began last summer and is scheduled to be completed next year.

Construction isn't scheduled to begin until next year on 30 Crossing, which will widen some parts of the corridor to 10 lanes from six.