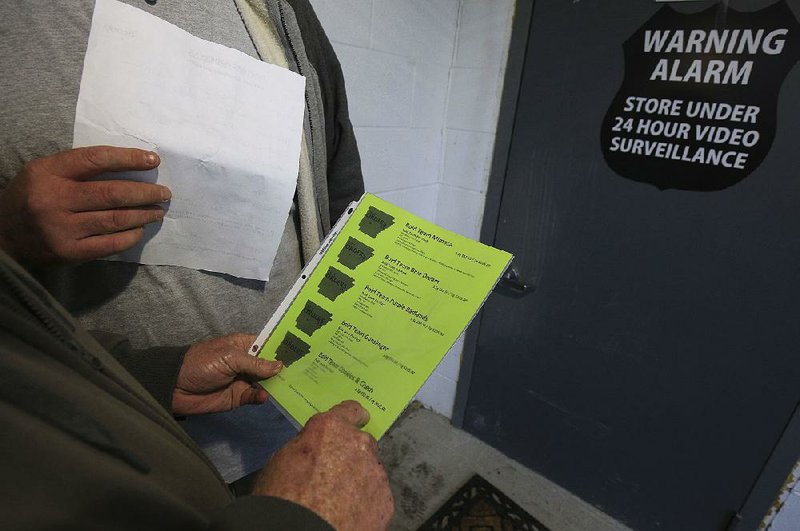 Customers wait outside Doctor’s Orders RX in Hot Springs on May 11, the first full day of sales.

Arkansans bought 52 pounds of medical marijuana during the first week of legal sales in the state, according to figures reported to state regulators.

Both dispensaries open in the state (Green Springs Medical and Doctor's Orders RX, both in Garland County) have publicized prices of $15 per gram, meaning the first week of sales brought in $353,802, excluding sales tax and the 4% state privilege tax levied on medical cannabis.

The early sales numbers, reported to the Arkansas Department of Finance and Administration, eased fears that dispensaries would run out of the limited product available in Arkansas.

Bold Team of Cotton Plant -- the only cultivation facility to have harvested and processed medical cannabis thus far in Arkansas -- reported that initial yields produced 200 pounds of usable cannabis, and that was sent to the two dispensaries. Over the weekend, it shipped the dispensaries another 50 pounds from another harvest, company spokesman Robert Lercher said.

So far, the growing company has been able to provide only the two retailers with dry cannabis flower, which is usually smoked, but Lercher said Bold Team hopes to soon make edible products available.

"We are working on gummies, but it is quite a process to get those 100% ready for the shelf," he said.

Arkansans voted to legalize medical marijuana in 2016, and the drug was first sold legally on May 11 after 2½ years of legal and bureaucratic delays.

The next step for the program is for the remaining four growers and 30 retailers to become fully operational.

State and industry officials expect the program to take off over the summer.

Scott Hardin, a spokesman for the Department of Finance and Administration, said that Arkansas Natural Products, a Clinton dispensary, has requested a June 6 inspection and others should soon follow.

Officials from cultivation companies Osage Creek Cultivation of Berryville and Natural State Medicinals Cultivation have not responded to requests for updates about their progress and expected harvest dates.

"Additionally, we are extracting and manufacturing cannabis related products, and we are going to start with a few product offerings then expand based upon the market demands," Lemberes said in the email. "That said, by mid July 2019 we expect to provide concentrates including vape cartridges and concentrate syringes. We will also have the following edibles -- chocolates, hard candies and gummies."

Bailey Moll, a spokesman for Doctor's Orders RX, said the company was satisfied with the first week of sales. The state-mandated tracking software that had caused some delays at first has stabilized, he said. He encouraged patients to bring all their paperwork with them on their first visit to the dispensary to ensure there aren't hiccups.

The product supply, he said, remains adequate. Doctor's Orders RX has sold 24.5 pounds over the first week of sales. Its first full day of sales was May 11.

"Doctor's Orders RX has no concern about continuing to be able to serve patients," Moll said. "We've been thrilled with the number of patients that we've been able to serve this first week."

Hardin said the tracking software used to follow transactions was unable to show how many patients had been served.

Retailers in Ohio -- the most recent state to roll out a medical cannabis program -- averaged about $248,000 per week during the first two months of operations, according to Ohio Medical Marijuana Control Program data.

Patients here have chafed that there aren't more dispensaries open, and it requires long drives for many in the state to visit Hot Springs to legally purchase the drug.

They've also complained about high prices, which are more than triple the street value of the drug. The drug in other states with medical cannabis programs is available for $10 per gram or less in many cases.

Also last week, the Russellville City Council voted against issuing a conditional-use permit to 420 RX to locate a dispensary there. Adam Harrison of 420 RX said the company was disappointed with the council's decision. The dispensary is considering its options, but it plans to appeal the permit denial to circuit court, Harrison said.

Thus far, the Arkansas Medical Marijuana Commission has approved all change of location requests brought to it by licensed dispensaries.

As of Friday, the Arkansas Department of Health had issued 12,090 medical marijuana registry ID cards to patients and eligible caregivers. Meg Mirivel, a department spokesman, said the number of applications had remained steady with no uptick after the recent opening of the first dispensary. She said the agency had 1,182 applications in the approval process.

Patients may obtain medical marijuana cards if a doctor certifies that they suffer from one of 18 qualifying conditions; the cards may also be issued to eligible caregivers if a patient is unable to visit a dispensary on his own.