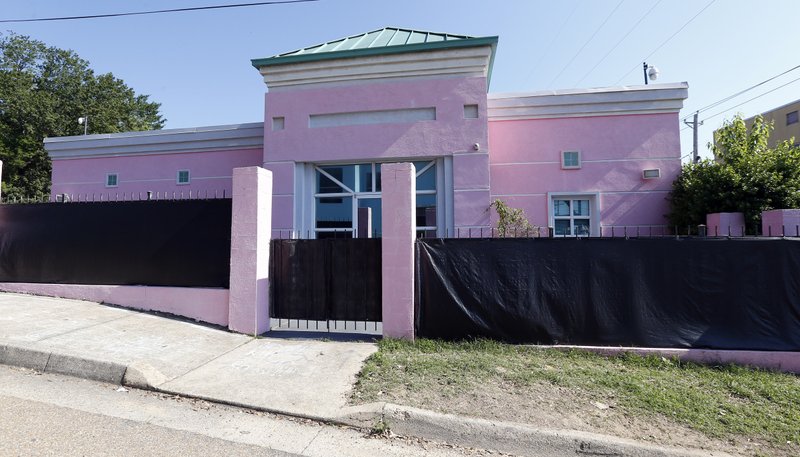 This Friday, May 17, 2019 photo shows the Jackson Women's Health Organization in Jackson, Miss. The facility is the state's only abortion clinic. (AP Photo/Rogelio V. Solis)

JACKSON, Miss. -- A federal judge who struck down Mississippi's 15-week abortion ban last year said during a court hearing Tuesday that the state's legislators defied his ruling by passing a new law that sets the ban even earlier.

The new law -- which is not yet in effect -- would prohibit most abortions once a fetal heartbeat can be detected, at about six weeks, when many women may not know they're pregnant.

Mississippi is one of several states enacting abortion restrictions this year in hopes that the U.S. Supreme Court, with new conservative justices, will re-evaluate and maybe overturn its 1973 Roe v. Wade decision that legalized abortion nationwide.

U.S. District Judge Carlton Reeves said Mississippi legislators passed the six-week law this year knowing he had declared the 15-week ban unconstitutional because it prohibited access to abortion before viability, which is generally considered to be about 23 or 24 weeks.

"It sure smacks of defiance to this court," Reeves said.

Reeves heard arguments Tuesday on the clinic's request that he block the law from taking effect July 1. He said he would decide soon, but did not indicate when he would issue a ruling.

Governors in Kentucky, Ohio and Georgia have signed bans on abortion once a fetal heartbeat is detected. Alabama's governor signed a measure making abortion a felony in nearly all cases.

The Mississippi law says physicians who perform abortions after a fetal heartbeat is detected could face revocation of their state medical licenses. It also says abortions could be allowed after a fetal heartbeat is found if a pregnancy endangers a woman's life or one of her major bodily functions. Senators rejected an amendment that would have allowed exceptions for pregnancies caused by rape or incest.

Hillary Schneller, an attorney for the Center for Reproductive Rights, said the Mississippi law is "clearly unconstitutional" because it bans abortion before viability.

Mississippi Special Assistant Attorney General Paul Barnes said the new law is not an outright ban on abortion but a limitation on when the procedure can be done.

"When a fetal heartbeat is detected, our position is it is constitutional" to prohibit abortion, Barnes said. He also said the state respectfully disagrees with Reeves' ruling on the 15-week ban.

If Reeves temporarily blocks the new Mississippi law, he would hear arguments later on the larger question of constitutionality.

Reeves asked Barnes whether a 10- or 11-year-old girl who is impregnated by rape would have to carry the pregnancy to full term if she waited too long to tell anyone what had happened to her. Barnes said he did not know whether a family court judge would allow the child to have an abortion after the fetal heartbeat is found. Barnes said the man who impregnated the girl could be charged with capital rape.

Reeves said legislators were aware the law did not allow exceptions for rape or incest. Barnes said he did not know if they knew, and Reeves responded: "Well, they speak through their statute."