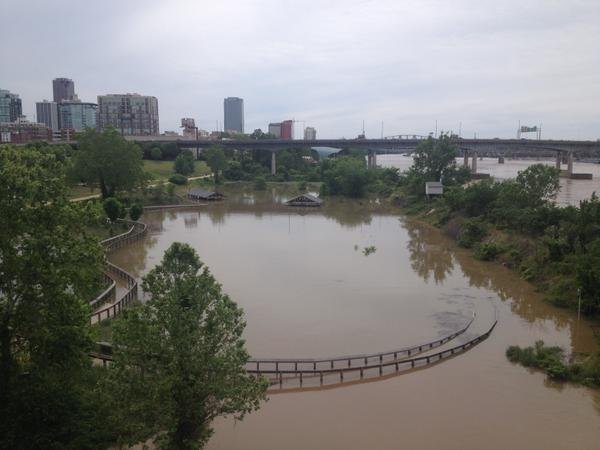 FILE - The William E. "Bill" Clark Wetlands by the Arkansas River floods Tuesday, May 12, 2015, after a storm system dropped more than eight inches of rain across the state.

Weather officials on Wednesday warned people along the Arkansas River to brace for severe flooding and fast river speeds as projections show potential to break long-set historic records following a rainy late-spring here and in Oklahoma.

The National Weather Service said it expects major flood levels in several cities along the swelling river. The agency predicts the river will be far above flooding levels starting on Saturday near Fort Smith as the surge of water moves downstream.

“It’s like a big wave coming down the river,” said Army Corps of Engineers spokeswoman Laurie Driver. “We know this water is coming, and we have no way to stop it.”

The Corps of Engineers urged people living near the river, especially in floodplains and places that often see flooding, to consider moving livestock and other items as the river rises.

Driver said people affected in the January 2016 floods are at higher risk, adding that the latest projections will be “substantially worse.”

The most notable forecast shows the river in Dardanelle and Morrilton cresting nine feet above their flooding stages. Major flooding is also likely to happen in Pine Bluff and Pendleton.

The river will be a foot under flood stages in Little Rock, prompting officials to issue an advisory.

The Corps of Engineers warned that the increased water levels caused by frequent and persistent rains in Oklahoma filled up lakes acting as a natural reduction device for Arkansas.

Recent storms this week dumped up to six inches of rain on Tulsa, adding to the lakes filling up around other parts of the state, according to the weather service.

The Corps of Engineers issued an advisory telling small boats not to go on the water.

Potential high flow speeds also have commercial tug boats staying off the river until the waters recede. “No one needs to be out on the Arkansas River,” Driver said.

Weather service data shows the tide of water will likely reach Pendleton by next Tuesday.