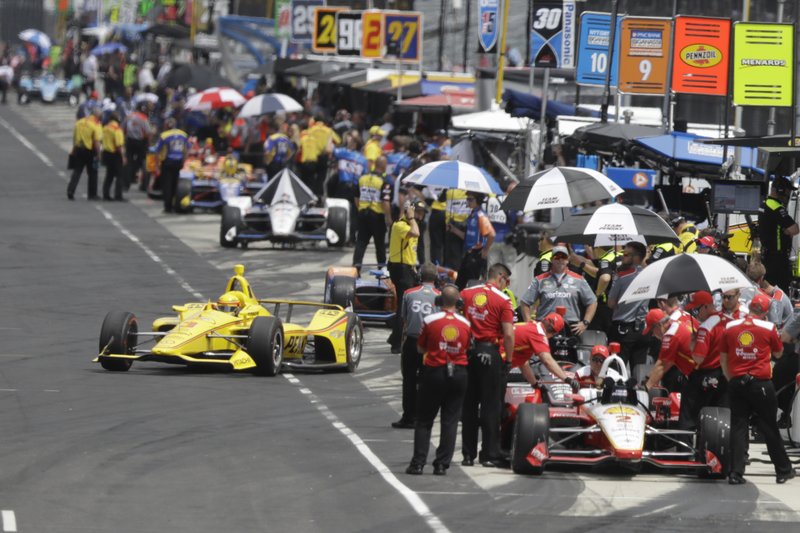 Helio Castroneves, of Brazil, pulls out of the pits during practice for the Indianapolis 500 IndyCar auto race at Indianapolis Motor Speedway, Friday, May 17, 2019 in Indianapolis. (AP Photo/Darron Cummings)

He could extend his season by putting Dennis Reinbold's No. 24 car into the Indianapolis 500 starting grid. Or he could go home and wait 12 months for another chance.

Karam delivered in the last-row shootout, qualifying 31st with a win-or-go-home mentality that has become a theme for the drivers who show up at the track annually with only one or two races on their schedule.

"I think that's why I was so emotional after [qualifying]," Karam said Wednesday. "I was feeling a lot of pressure because I waited a whole year to get back to Indy. I did so much to get ready and I didn't want all this stuff to go for nothing. Also Dennis has never had a car that failed to make the race. I didn't want to be the first."

Karam, 24, came up clutch with an average speed of 227.740 mph, putting him ahead of 2016 pole-winner and series regular James Hinchcliffe. It also put him ahead of two-time Formula One champion Fernando Alonso, who got bumped out of Sunday's race.

Not every one-off driver winds up in such a high-stakes situation.

Three-time race winner Helio Castroneves will make his 10th attempt at a record-tying fourth Indy 500 victory from the No. 12 starting spot Sunday.

Oriol Servia continues to chase the elusive win that would make him an instant star in his native Spain.

And Karam and teammate JR Hildebrand are trying to help Reinbold generate enough to transition to running IndyCars full-time.

The challenges are different, too.

At 31, Hildebrand is the 2011 Indy runner-up who acknowledges he's adjusted his mentality to his new job after previous stints as both a full-time and part-time driver in the series. Hildebrand has competed in only one or two races five of the last six years.

"I think you look at racing in a little different way when you're only racing once," he said before qualifying 21st. "In some ways, it makes it easier because you can have a much more focused approach. But it's also impacted how I think about my aggression level during the race."

Castroneves is a relative newcomer to this form of racing.

A year ago, the popular Brazilian competed only two times in Indy cars -- making his season debut on Indianapolis' road course and his season finale two weeks later on the Brickyard's historic oval. That's the plan Team Penske followed again this year, and it's the intended plan for 2020.

"I'm glad I'm with the same team because I'm comfortable with so many phases of it, starting with the seat and what you have on the steering wheel and the language with the engineer," Castroneves said. "At some point, muscle memory kicks in and the good news is that everyone is running their first oval of the season here so you're not too far behind."

ON THE POLE Simon Pagenaud (four-lap

Print Headline: One-shot drivers hope to use Indy 500 as a launching pad