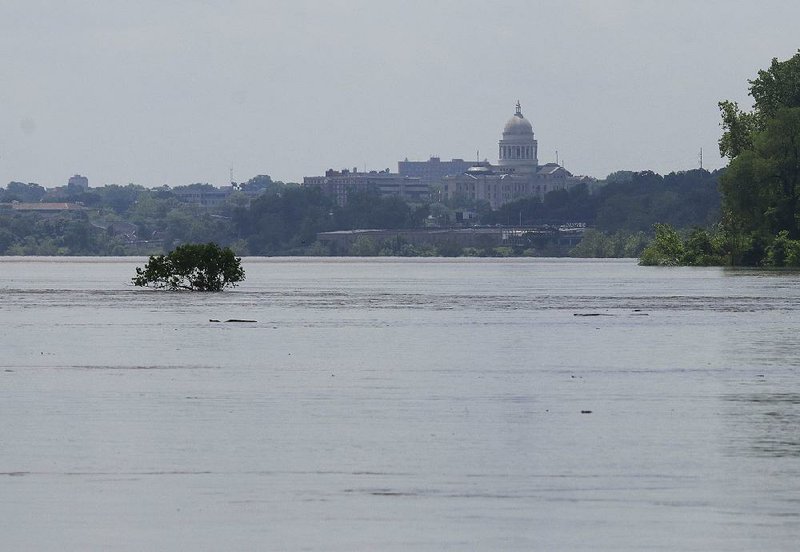 The Arkansas River runs high Thursday morning between Burns Park and the state Capitol as water from Oklahoma continues to flow into Arkansas. The river is expected to reach record highs over the weekend and into next week.

Communities along the Arkansas River stacked and filled sandbags while bracing as a deluge of water continued to move downstream on Friday from Oklahoma, potentially setting the stage for historic flooding.

Gov. Asa Hutchinson directed the Arkansas National Guard to send rescue teams to the western part of the state where rising river waters have begun to pool up in cities there.

Hutchinson said people should heed evacuation orders if they’re given. He also urged them to follow instructions from their local emergency offices as the wave of water moves downstream throughout the weekend and next week.

“We are preparing to deal with the record-breaking floodwaters that meteorologists and the (Army) Corps of Engineers are predicting for the coming days,” Hutchinson said in Friday morning statement.

Weather officials said heavy and persistent rains in Oklahoma recently filled up lakes there, which act as a natural flood reduction mechanism for the Arkansas River.

It has the potential to create historically high levels not seen in nearly 30 years, according to forecasters who expect rising waters will break multiple historical records in the coming days.

Water levels there are expected to crest 10 feet above the river’s major flood stage, according to the National Weather Service.

So far, the flooding hasn't impacted any homes in the area, but he cautioned residents to be aware of their surroundings as the river continues to swell ahead of reaching its crest on Sunday.

Residents and city staff in Conway filled sandbags Friday afternoon in anticipation for floods that potentially could see the river crest 13 feet above major flood levels next Wednesday, which would set a new record.

Faulkner County spokesman David Houge said the county issued an emergency order and has recommended people in some areas evacuate, though no mandatory order has been issued.

He said people living in areas that flooded in 1991 and in 2016 should consider leaving.

“We are going to be at the same river height that we were in either one of these years and maybe more,” Houge said.

The Army Corps of Engineers also issued stern warnings for people to begin moving livestock and other items as the water levels rise. They also urged small boats not to go onto the river because of fast-moving flows.

Parts of the river in Little Rock could see moderate flooding when the river crests next Friday and exceeds its flood limit by 3.5 feet, according to the weather service.

The National Guard will be following the wave of water as it continues down the Arkansas River throughout the weekend and into next week.