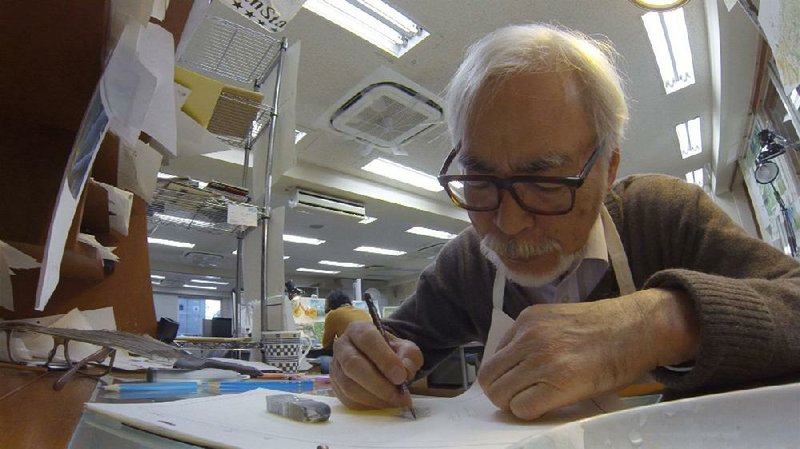 I believe I've mentioned my love of Japanese animated works in these columns before. To a first-time viewer, the style may seem odd, the stories strange, and the names hard to pronounce. But the art style has nevertheless found a big fan base in America. That's why you know about things like Pokemon, Dragon Ball Z and Sailor Moon.

Among directors of Japanese animated movies, you won't find a name more famous than Hayao Miyazaki. He has had his hand in some 30 movies from 1979 to now (along with smaller projects and television series).

He won an Academy Award for his 2001 hit Spirited Away. After his 2013 film The Wind Rises, he retired. But that didn't last long. The popular director and co-founder of Studio Ghibli was soon at work on another movie to be released soon called How Do You Live? And there are rumors he has another idea for another movie after that. Mr. Miyazaki does not quit. They'll have to move him directly from the studio into a coffin in the (hopefully far) future.

After recently coming into possession of the collector's edition Blu-ray release of Princess Mononoke, I figured it was worth topping my three favorite movies of his and my least favorite. Miyazaki is a genius, and I adore his work, as do millions of other fans across the globe.

Oddly enough, his son Goro Miyazaki has also reluctantly gone into the Japanese animation business like his father. His first movie was an adaptation of my favorite fantasy book series, Tales From Earthsea by Ursula K. Le Guin (God rest her soul). It was... not good. But later he released a charming little coming of age story called From Up on Poppy Hill that I thoroughly enjoyed.

As for my least favorite Hayao Miyazaki movie, it's undoubtedly his last before retirement, The Wind Rises. The story follows real-life Jiro Horikoshi as he designs airplanes for use during World War II. The animation is fine, but the rest of the movie is disjointed with odd pacing. I'm not sure who to attribute that to. Another factor I disliked, one that Miyazaki had relatively no control over, is just how depressing the film was. I watched it once, and I won't watch it again because it bummed me out that hard. I get it's a bio-pic, and you can't change events, but if I were he, I wouldn't have made this film at all.

Mr. Miyazaki made a film about airplanes before with 1992's Porco Rosso. It follows an Italian World War I veteran pilot who has been cursed to look like an anthropomorphic pig. The film is adventurous, heartful, funny and has some fantastic action, all trademarks of a great Miyazaki movie. His movies usually have a fantastical element to them, so why he chose to make a bio-pic with such a depressing story, I have no idea.

It's hard to pick favorite Miyazaki films. Most are just so wonderful in their own way. You watch enough, you begin to see the man has some recurring elements of environmentalism and feminism through his movies. He's not afraid to include a badass heroine as the main character and often does.

As a fan who wants to put on at least a few airs, I don't want to pick the obvious favorite films like Howl's Moving Castle (which is adapted from an amazing novel by the same title) and Spirited Away. I love both of these movies and have seen them each several times, but I just can't put them in my top three, even if it kills me not to.

My third favorite Miyazaki movie would have to be Arrietty. This is his take on the 1952 novel The Borrowers about tiny people who live in people's houses and share household materials. You may be familiar with the 1997 movie starring John Goodman. In my opinion this is Miyazaki's most underrated movie. It's so beautiful and delicate. You can see Miyazaki softening his tone a bit as he ages. He's not the same man who directed such bloodthirsty flicks like Princess Mononoke or war epics like Howl's Moving Castle. And this film (along with Ponyo) reflects that.

The story follows a sickly boy named Sho who discovers Arrietty and her tiny family. Arrietty's mother and father warn her to stay away from humans, but she gradually forms a friendship with Sho. The unlikely pairing between a seeming giant and brave little lady make for some great adventures when they have to rescue Arrietty's mother after she's captured by a suspicious housemaid. This movie isn't likely to be on anyone's top-three Miyazaki list, but it deserves to be. My favorite aspect comes down to the soundtrack, though. Miyazaki movies usually have decent music, but this is one I actually went out and bought the soundtrack for and still listen to it today.

His very first movie before even co-founding Studio Ghibli is called The Castle of Cagliostro, and it's my second-favorite movie of his. This movie from 1979 is part of a long-running series called Lupin the Third about a gentleman thief who travels the world with his three partners in crime to steal priceless treasures. I already loved the timeless series when I saw this movie, and it's also my favorite Lupin movie. You can see Miyazaki's touches on this movie even though it's his directorial debut. He changes the character of Lupin, making him less sleazy and a little more heroic. Some fans don't like this, but I love it.

My top Miyazaki film is actually his second movie and also predates Studio Ghibli. It's called Nausicaa of the Valley of the Wind from 1984, and it's a post-apocalyptic (before the format got tired like today) tale that follows a princess trying to save her kingdom from a toxic jungle and giant insects that have overrun the planet. I love everything in this movie, from the animation and the story to the music. But I think it's the narrative and characters I love the most.

Funny story. When this movie came to America in 1985, the company that dubbed it cut 22 minutes of scenes and changed the story to make a new movie called Warriors of the Wind. It was terrible, and the more accurate translation came later. But The Guardian reported when the English release of Princess Mononoke was going to get the same treatment from Miramax co-chairman Harvey Weinstein, editor of the anime magazine Animage, Toshio Suzuki, sent him an authentic katana with a simple message "No cuts." This also became Miyazaki's official policy when bringing his movies to America. Now Ghibli typically partners with Disney for the dubbing and American releases. The company really has its fingers in everything.

Like I said before. It's hard to narrow down my favorite Miyazaki films, and if I had honorable mentions, I'd of course throw in Kiki's Delivery Service and Castle in the Sky. I'm looking forward to How Do You Live? And I hope Mr. Miyazaki's health stays strong. He's 78, you know. Godspeed, you fantastic director.