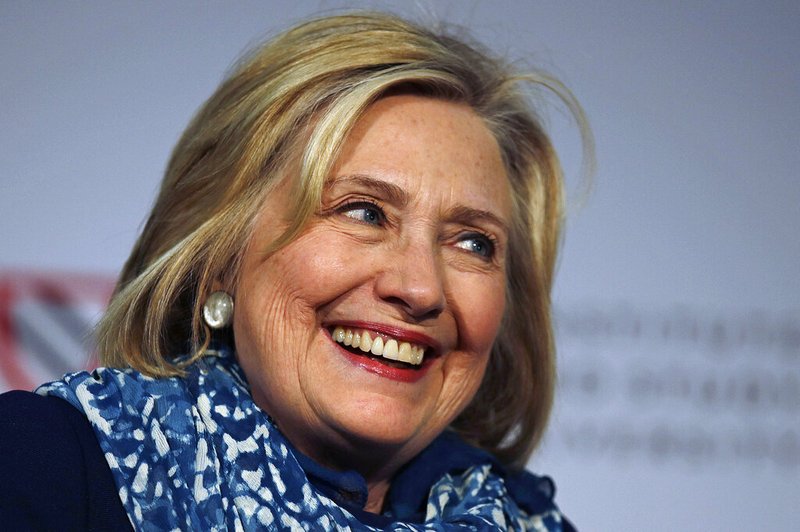 In this May 25, 2018 file photo, Hillary Clinton smiles as she is introduced at Harvard University in Cambridge, Mass. (AP Photo/Charles Krupa)

She had just had a front-row seat to an hour of what felt like a toast to her time as Arkansas' first lady.

Marcy Doderer, president and chief executive of Arkansas Children's Hospital, recalled Clinton's influence on the hospital's expansion that took it from an overcrowded facility to what it is today.

Former state Rep. Gloria Cabe, who later was a senior adviser to Clinton when she became U.S. secretary of state, discussed Clinton's role in the overhaul of Arkansas' public schools.

Ann Kamps, an aide to Clinton when she was Arkansas' first lady, explained Clinton's role in bringing the Home Instruction Program for Preschool Youngsters to Arkansas.

"I'm massively embarrassed by all of this," Clinton said after the panel discussion. "I feel like I maybe just lived through my eulogy."

Clinton, 71, was back in Little Rock to participate in the William J. Clinton Presidential Center and Park's "Bridge Builders" series. Today, she's giving the commencement address at the Arkansas School for Mathematics, Sciences and the Arts in Hot Springs.

Clinton, who also served as a U.S. senator from New York after being the nation's first lady, said it was good at this point in the nation's history to come together and reflect on the past to extrapolate how to work with others to make positive change.

Doderer recalled one story about Clinton traveling to New York in 1980 while she was eight months pregnant with her daughter, Chelsea, to lobby Standard & Poor's to give Arkansas Children's Hospital a good bond rating so that the hospital could access funds to expand. Clinton joked that Standard & Poor's officials acquiesced so quickly just to be sure that she left their offices before she gave birth.

"Her spirit still reverberates through all of our facilities," Doderer said.

Cabe said that Clinton was instrumental in raising Arkansas' public school standards and revising the school-funding formula through the 1980s after the Arkansas Supreme Court declared the formula unconstitutional. She said that Clinton pitched a variety of changes during one legislative session, prompting one legislator to remark: "Fellas, I think we might have elected the wrong Clinton."

Williams, the banker, said that Clinton made Arkansans proud to be from the Natural State. Kamps agreed.

"I want young ladies to know that someone came here and became an Arkansan and brought a passion for learning and it was cool and it was good," Kamps said.

Clinton closed her remarks by noting that there's still much work to be done in Arkansas. In particular, she said that the state still can't guarantee every child the highest quality of education. She implored the audience to keep moving forward.

"It takes work; it takes commitment," Clinton said. "And dare I say, it takes a village."