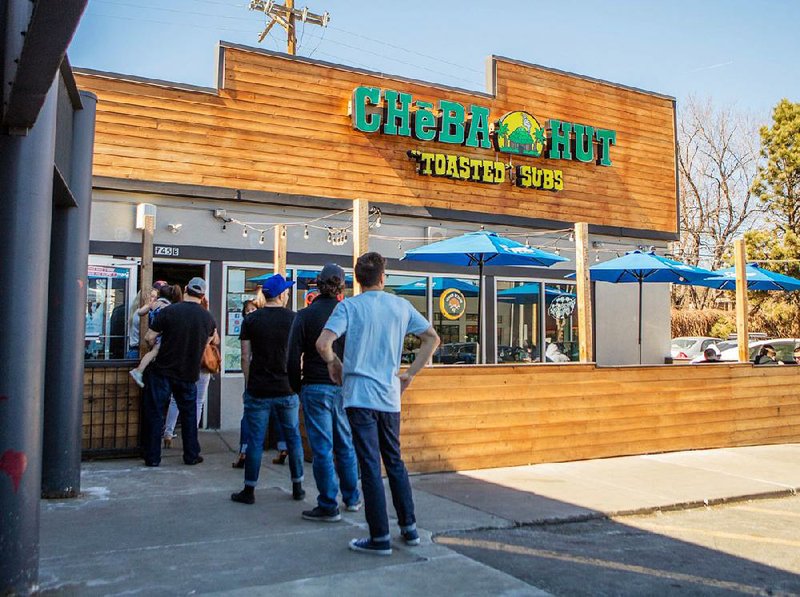 Cheba Hut, a national chain restaurant that has built its brand around cannabis-theme eateries, is opening its first location in west Little Rock, with plans for joints in Conway and Fayetteville in the not to distant future.

Colorado-based Cheba Hut opened its doors more than 20 years ago and has 25 locations, in seven states, mostly contiguous to Colorado. While Cheba Hut does have some corporate-owned locations, the Arkansas restaurants will be franchise operations.

Cheba, also spelled cheeba, or chiba, is slang for marijuana.

The sandwich shops operate in the fast casual segment and are weed theme from a "toasted subs" tagline to a counterculture mascot, a bird named "Flip." The toasted sub menu, with sandwiches named for various pot varieties, includes Jamaican Red, Thai Stick and Silver Haze; the "munchie" menu includes cheesy bread and pretzel nuggets; sweet treats include Rice Krispie bars and of course, brownies; and its "cottonmouth cures" include iced tea, soft drinks and Kool Aid.

Typical Cheba Huts include a full bar where there's an emphasis on local craft breweries and distilleries, as well as the company's signature cocktails such as Dirty Hippie, Hash Can and Cheba Rita.

Hunter and Darcie Fletcher, who live in Conway, hold the Cheba Hut franchise rights to the three Arkansas locations. Darcie Fletcher said they are in final lease negotiations for their first location in west Little Rock. If things go as planed, the restaurant will open sometime in the fall, or early next year at the very latest. They are still scouting locations in Conway and Fayetteville, with a timetable to open the Conway restaurant sometime in summer 2020 and the Fayetteville place shortly thereafter.

Darcie Fletcher stressed Cheba Hut's cannabis branding is simply a fun theme and no compounds found in pot, like THC or CBD, are used in food or drink preparation.

The Fletchers are first-time franchisees and had been searching for the right match when their franchise broker suggested Cheba Hut. Darcie Fletcher said they just clicked with the Cheba Hut mentality of offering great food along with building close relationships with its customers.

"They say, 'It's all about the interaction, not the transaction,'" Fletcher said.

As for Cheba Hut's pot-based theme, she said the couple wanted their restaurants to stand out in the marketplace and while the theme might seem a little unusual, Cheba Huts are fun for everyone.

"We didn't want to be a typical sandwich shop," Fletcher said.

Seth Larsen, Cheba Hut's chief relationship officer, called Arkansas a great fit for the brand, primarily with its residents' love of the outdoors. He said in addition to Arkansas, the company's short-term plans include new restaurants in Florida and Georgia.

"We play well in any market," he said.

He said Cheba Hut restaurants tend to be in places with a good lunch crowd and access to parking but also tend to have outdoor seating and enough room to encourage customers to linger over their food or order another beer.

"We like people to sit outside and stay a little longer," Larsen said.

Martin Thoma, a principal at Little Rock-based Thoma Thoma, a brand leadership firm, and author of Branding Like the Big Boys, said Cheba Hut's branding makes for a fun concept that makes it stand out in the sandwich shop and fast casual segments, which are crowded with competitors who struggled to differentiate themselves.

When asked how the concept would play in Arkansas, Thoma noted the state tends to skew rather conservatively but added it recently legalized use of medical marijuana and just opened its first medical marijuana dispensary. He said Cheba Hut's expansion seemed timed with a more relaxed national attitude about marijuana use, with more than 30 states, including Arkansas, legalizing medical marijuana and 10 making the plant legal for recreational use.

Thoma said Cheba Hut was clever, not only to link its brand with marijuana's well-known association with appetite stimulation, but with other aspects of pot culture, including relaxation, cheerfulness, friendliness and playfulness. He said there would be some potential customers who won't darken Cheba Hut's door because of its messaging but that didn't matter much where branding is concerned.

"In some ways that's the whole point of a brand. You're not only defined by what you say yes to -- but sometimes what you say no to," Thoma explained.

In the end, he said, while important overall, cool motifs, logos and branding will only take a sandwich chain so far.