The Sentinel-Record/Grace Brown KEYNOTE SPEAKER: Former U.S. Secretary of State Hillary Clinton speaks during the 25th graduation of the Arkansas School for Mathematics, Sciences, and the Arts at Bank OZK Arena on Saturday.

HOT SPRINGS -- Former Secretary of State Hillary Rodham Clinton urged the graduating class Saturday at the Arkansas School for Mathematics, Sciences and the Arts to "be brave."

The former Arkansas first lady and former Democratic presidential candidate, who played a key role in founding the school, spoke at its 25th commencement ceremony held in Bank OZK Arena, near the Hot Springs Convention Center.

"Be brave in your life. Be brave in seeking your dreams, whatever they are. Be brave in work and love and service. Be brave as you take on what is not easy and comfortable, what you're not even sure you can do. Be brave and do not worry about being perfect. Perfection is one of the biggest problems that young people encounter today, especially young women," she said.

"Second, be resilient, because even if you are brave enough to chase your dreams, you are going to encounter setbacks and disappointments and disillusionment. But remember, being resilient is really what separates people from those who get up and keep going, no matter what knocked them down, and those who get overtaken by their fears and stop themselves from moving toward their dreams."

Clinton recalled her first visit to Hot Springs in 1973 while she was dating her now-husband, Bill Clinton, the former Arkansas governor and two-term president.

Hillary Clinton talked about founding the school in 1991, which occurred during her husband's time as governor, and the need it filled in the state's educational system at the time. The two-year, public, residential high school is part of the University of Arkansas administrative system.

All classes are taught at the college level, and the school offers nearly 60 courses for university credit, according to the University of Arkansas System's website.

"It's a thrill to be here and to have read about all of the accomplishments over the years, to see the alumni stand up, to know that this is an education that is second to none.

"After all, there are only 15 publicly funded high schools like this one in the entire country, and among them, this school has the most socioeconomic diverse student body. It has consistently ranked near the top of the 15 competitors, and it has lit the fire of learning and passion in now nearly 2,600 young people. So I could not be prouder to be here with all of you today," she said.

Clinton also spoke about the example her mother set for her and the importance of kindness and gratitude.

She ended her address with: "I'm very optimistic about the future, even though I know how many huge problems we face. And part of that optimism is because I spend as much time as I can with young people, and I am not only reassured. I am thrilled at the ambition, the caring and concern and determination, to do something about what faces us here in Arkansas, across America, and around the world, that must be tackled together."

After the new graduates received their diplomas and exited the stage, all had professional photographs taken with Clinton.

Overall, the 2019 class had an average composite ACT score of 30.1 and earned more than $13 million in scholarships among its 102 seniors.

Security was tight for Saturday's event. At least eight Hot Springs police vehicles sat outside the convention center and the school provided six security guards for the event. Also, the venue provided security and Clinton had her own security detail.

Donnie Sewell, the school's public information specialist, estimated that up to 2,000 people attended the tickets-only graduation festivities, before which a private reception was held for Clinton and about 30 invited guests. 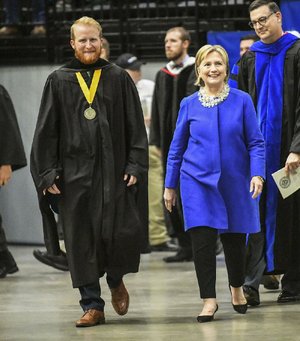