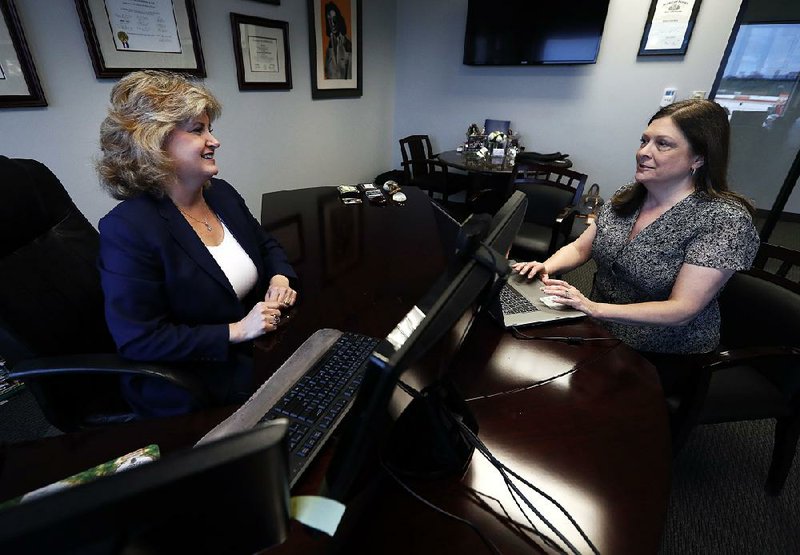 Meloney Perry (left), owner of Perry Law, talks with a member of her staff, attorney Karla Roush, at the firm in Dallas. “I learned the ‘old school’ way, but it’s changed,” Perry said.

NEW YORK -- Meloney Perry once worked at a traditional big law firm with a formal, corporate atmosphere, and knew she wanted a different culture at her own firm.

"I learned the 'old school' way, but it's changed," said Perry, founder of Perry Law in Dallas. "Nowadays, with the employees coming in younger, you do have to have more of a family feel."

That means allowing more casual attire when clients aren't around, and giving employees laptops so they don't have to work long hours at their desks.

Small businesses' cultures are becoming a bigger priority as more owners respond to the dramatically different expectations of a younger workforce and a low unemployment rate and shrinking labor pool that make it harder to find workers. In a survey released last fall by Bank of America, a quarter of the 1,067 owners surveyed said they were shifting to more flexible cultures in hopes of attracting the workers they want. Companies are creating environments that recognize employees' need for growth in their careers, more balance between their work and personal lives and open communication. And to have a role in the company's direction -- employees don't want to just do their work and keep quiet.

"They want to feel appreciated and be included in the firm decisions," Perry said.

They also need an atmosphere that's less rigid than old-style corporate environments. Owners have come to recognize that reading personal email, texting friends and doing online searches for personal matters are a part of life, and not just for younger people. Baby boomers are just as likely to be checking their phones periodically during the day as their younger colleagues are.

Guy Fardone recognizes that younger employees, those known as millennials, are in some regards more openly ambitious than baby boomers or Generation Xers, people who are now in their 40s and 50s. They want to know what their next move is.

"Many millennials thrive on continuous growth opportunities, which could take many forms: learning a new technology, getting a technical certification or getting the nod to lead a project or opportunities to advance, said Fardone, owner of Evolve IP, an information technology company based in Wayne, Pa.

Owners who want a good culture will need to be aware of their interactions with staffers -- what they do can have a greater impact than what they say.

"Your values really emerge from how you behave," said Tony Fross, who advises clients on workplace practices for the consulting firm Prophet.

For example, micromanagers need to understand they'll get more out of their workers by giving them autonomy, Fross sids.

"People live down to your expectations rather than up to them" when they're over-controlled, Fross said. "You need to give people incentives and make it easy from a decision-making perspective to do the things you want them to do."

Culture isn't something many entrepreneurs think of when starting their companies, but many realize as they begin hiring that it needs to be a priority.

"You think so much about the bottom line and being able to expand and hire that you don't always consider other factors," sayid David Wurst, who says he had no idea about how to develop a company culture when he started WebCitz, a website development company based in Appleton, Wis. But as he began hiring, prospective employees asked him about the company culture, and also said they hated the suffocating atmosphere at the jobs they were leaving.

Wurst educated himself by reading about what constitutes a good company culture. He learned "the managers of a business have to understand employees deserve respect and encouragement in order to thrive in their positions, which will help the company as a whole."

So Wurst aims at giving employees opportunities to make a meaningful contribution to the company's growth. He also tries to create a warm and congenial workplace; he takes workers out for lunch to celebrate successful projects and is flexible about personal time.

Melinda Byerley learned from a former employer that a good company culture recognizes workers as humans with anger and other emotions not always welcome in the workplace.

"We ask everyone to own those emotions and use them productively -- whether that's taking a short break or the afternoon off, to admit that something triggers or upsets them, or however they process and deal with those emotions," said Byerley, owner of TimeShare CMO, a digital marketing company in San Francisco.

Byerley, who has a staff of about 20, also has created what she calls the Rage Cage, a messaging channel where everyone can vent.

"I'm modeling productive behavior as well as making a psychologically safe space for others to acknowledge the very real emotions that come with all humans," she says.

A company's culture shouldn't be set in stone; at some firms, it needs a complete overhaul.

When Dave Stout was hired 13 years ago as chief financial officer of Banker Wire, the owners presided over what Stout calls a centralized, controlling environment. He almost quit after the first day. But as Stout gradually took on more responsibility at the Mukwonago, Wis., manufacturer of wire mesh products, and eventually a 40% stake in the business, he remade the culture.

Stout, who became president 10 years ago, began by increasing pay and implementing a flexible work schedule. He encouraged their autonomy. He recognized that younger workers had a different but no less valid way of doing things. He built up their trust.

Today, Stout said, "I think 98% of Banker Wire's culture comes from my colleagues and only 2% comes from me."