Dowsers join this week in hunt for lost burial plots 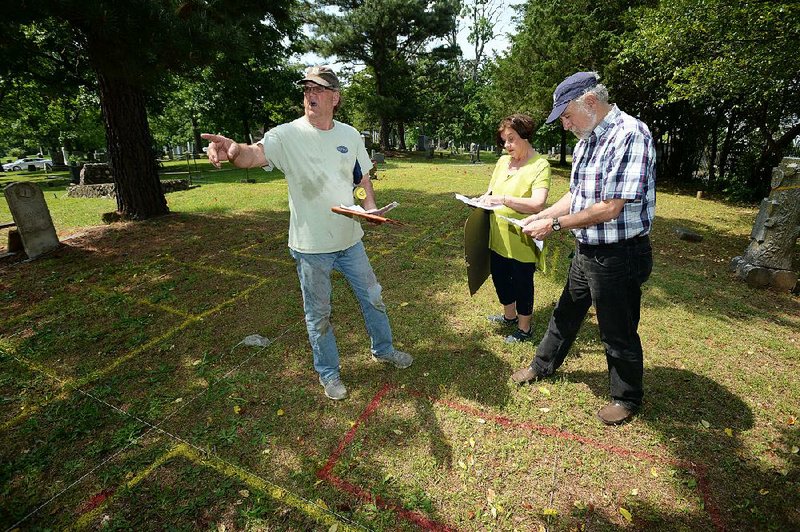 Bob Young (left), administrator of the Fayetteville Evergreen Cemetery Association, speaks Wednesday with Marilyn Heifner, association president, and Ken Kvamme, a professor of anthropology at the University of Arkansas, Fayetteville, while working to locate unmarked graves in the cemetery. ( NWA Democrat-Gazette / Andy Shupe)

FAYETTEVILLE -- There are about 200 unmarked graves in Evergreen Cemetery.

Exactly where they are is a bit of a mystery.

A University of Arkansas, Fayetteville professor used magnetometry, electrical resistance and ground-penetrating radar to help locate them. Red and yellow rectangles on the ground mark the possible graves.

This week, the dowsers will arrive, said Marilyn Heifner, president of the cemetery association's board.

"They say they can tell if it's men, women or children," she said.

Heifner said the cemetery association will place small headstones on the unmarked graves as money becomes available for the markers. The inscription will read "Unknown."

"For three years, we've been trying to find out who's buried here," Heifner said.

Bob Young, the cemetery administrator, said a caretaker's record indicated that the old part of the cemetery was full in the 1940s.

"There wasn't room for any more," he said.

It doesn't look full. There are few headstones in that section.

Heifner said the researchers searched old lists and obituaries. Then, last year, they got a big break.

"Only by finding the gravedigger's records from 1904 to 1920 did we come across some names that we'd never heard of," she said. "Sometimes the gravedigger was a really good gravedigger but not a very good speller."

Heifner said they have come up with a list of almost everyone who's buried in Fayetteville's first public cemetery. Now they are trying to determine exactly where the graves are.

After they figure that out, they still won't know who is buried in any particular unmarked grave unless it's documented somewhere.

Still, having the name of someone who's buried at Evergreen Cemetery and being able to direct family members to the "Unknown" headstones could be of some consolation.

"Genealogy is really important to people now," Heifner said. "They're trying to find out where their people are buried."

About 3,600 people are buried in the 10-acre cemetery, which is just south of Dickson Street and the UA campus.

Ken Kvamme, a UA professor of anthropology, uses the cemetery as a laboratory for his students to do geophysical surveys.

The method detected a few iron coffins under the ground.

"Another problem here is the bedrock is so shallow, rocky soil, so it really messes up this method," he said.

By using the three technological methods, Kvamme said he located about 40 graves and possibly another 20. Some other underground disturbances may be graves, but Kvamme said he can't say for sure.

Kvamme said he'll take students back to the cemetery next spring to do more research.