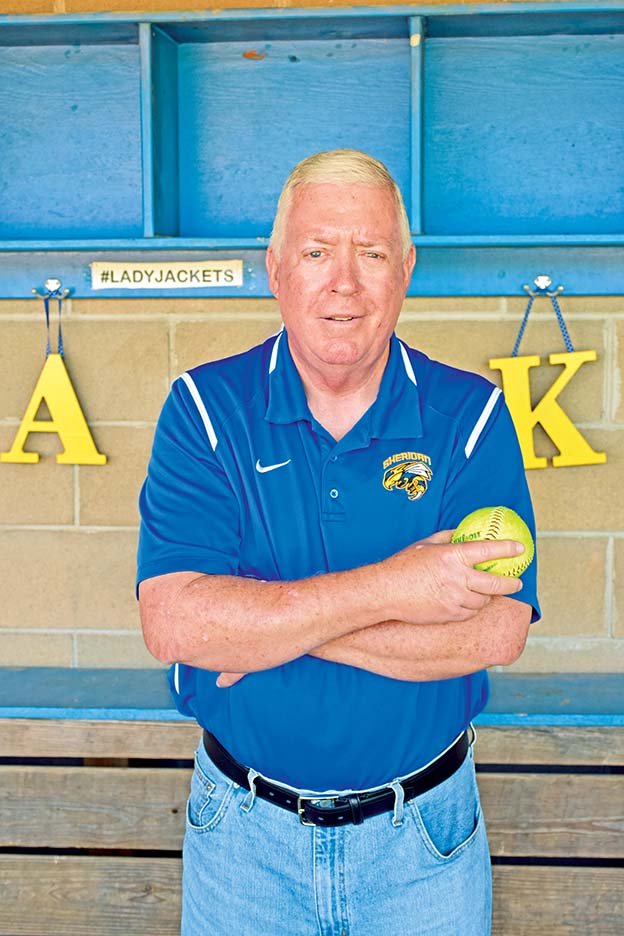 Eddie Paul Woodall, who coached varsity softball for Sheridan for 11 years, is retiring from the district after 35 years. He coached seventh-grade football his entire career but has also served as an assistant basketball coach, a head cross-country coach for five years and a track coach for about 19 years.

SHERIDAN — Coach Eddie Paul Woodall has probably taught half of the residents of Grant County how to drive.

“And if he didn’t teach them how to drive, he had them in class or he coached them,” said Matt Scarbrough, director of athletics for the Sheridan School District. “Anybody who came from Sheridan or anybody who is still around, Eddie Paul has made a connection with those people.

“I respect the longevity he has put into one community — it is not a common thing. Most coaches move on to something bigger or better, but everything he has wanted to accomplish, he has done here.”

Woodall will retire from the Sheridan School District after

35 years. He coached seventh-grade football his entire career but has also served as an assistant basketball coach, a head cross-country coach for five years and a track coach for about 19 years. He was also the head softball coach at the varsity level for 11 years, and he spent every summer teaching driver’s education.

“I wanted to spend more time with my grandkids, and I just want to have more free time,” Woodall said. “My health is relatively good, but basically, I just felt like it was time.”

Woodall stepped away as the head softball coach in 2014 because he wanted to spend more time with his grandson Bay Bramlett, who was 4 at the time.

“He was starting to play T-ball, and I wanted to be able to be there,” Woodall said.

He has three other grandchildren, including Easton Mynhier, Alex Cotton and Alissah Cotton.

“At some point in his career, he has done a little bit of everything. I think he has been part of everything we do at one point or another.”

Woodall is originally from Mississippi but came to Sheridan in the latter part of his high school career, graduating from Sheridan High School. He graduated from the University of Arkansas at Little Rock in 1983, earning a bachelor’s degree in education. He said there were only two times when he seriously considered leaving Sheridan for another job.

“The first time, both my daughters were in school here, and they just did not want to go,” Woodall said. “My wife is from here and has lived here all her life, and family is the most important thing to me. But really, every time I would think about going somewhere, I would look at the next group I had coming in, and I would think, ‘I can’t leave so and so.’

“That’s pretty much the reason, and I have had a good time here, but it is basically due to family and the kids here.”

Woodall and his wife, Tammy, have been married for 43 years and have two daughters, Casey and Chelsey. Both were all-state volleyball players for the Sheridan School District, having played for former coach Beverly Scott.

Woodall said. “She was outstanding and one of the best coaches and people that I have had the pleasure of being around.

“Her son, Joe, is the basketball coach here now. She was outstanding. My girls just love her.”

The Sheridan Lady Jackets softball team recently won its fourth straight state championship on May 17 under current head coach Tamara Strawn. Woodall said the first two state-championship wins were by girls that he coached, so he couldn’t be prouder of the team’s accomplishments.

“I knew what was coming,” Woodall said. “I just want them to win.”

He said that for the most part, he has stepped away completely, but occasionally, Strawn will come to him for advice or suggestions, and he is glad to help.

“But I think it is important for me to not overstep in that way,” Woodall said. “She’s done an outstanding job.”

“I have just loved sports from the time I was 5 or 6 years old,” Woodall said. “My brothers can all rebuild a car engine, and I can hardly put gas in a car.

“Sports and athletics have been my interest my whole life, and I have played just about everything. I have been lucky to have some really good mentors here.”

Woodall said he was very lucky to have coached with Mark Perkins, David Robinson and David Alpe, who is from Malvern. Woodall also mentioned former softball volunteers Rusty Barton, Gary Sisk and Gary Hightower. Woodall also said that if it hadn’t been for Johnny McMurray, Woodall might not have ever gotten into coaching.

“He pushed me into it,” Woodall said. “I was lucky in softball. A lot of it depends on how many kids you have playing in the summer, and Wayne Bonner coached the summer team — which 70 percent of my team played on.

“He played enough of them without burning them out, and I credit him with a lot of the success. I couldn’t have asked for anything better, as far as summer preparation.”

Kris Erstine, who coached under Woodall for several years at the junior high football level and is now retired, said Woodall

is “a real good friend and a good coach.”

“He is good with kids and shows a lot of patience,” Erstine said. “He had a good rapport with kids. He wasn’t one of the coaches that yelled or screamed — he did it the right way.

“Usually, kids know when they mess up. You don’t always have to yell and scream at them. He was good with them in that way.

“He is a good Christian guy to work with and was easy to work for. We got along real well, going further than just coaching together.”

Webb, whose son, Gary, was on the team at the time, was a volunteer coach for Woodall.

“All of the boys just really liked him,” Webb said. “He was tough on them, but he did it in a positive way — they all love him.”

Webb said that for the first couple of years, he would spend his days running with the guys on Sunday and would do some of the workouts. After Webb’s son graduated, he did a lot of the paperwork for Woodall.

“He was a real good coach,” Webb said. “He knew what he was doing.”

Gary Webb is now the cross-country coach for the Ouachita School District, where his son, Garett, runs.

“Eddie and I still visit; I see him pretty frequently,” Ronald Webb said. “We were friends before we ever did cross country together. In a small town like Sheridan, you know everybody anyway.”

Shawn Hill has been the pastor for 12 years at First Landmark Baptist Church in Sheridan, which Woodall attends. Hill’s son, Luke, who graduated from high school in 2017, played football for Woodall in the seventh grade.

“Coach Woodall is a fairly reserve competitor who loves to win and wants to win,” Hill said. “But more than anything, he cares about the kids that he is coaching. He is just a really great guy.”

Hill said one of the biggest impacts Woodall makes with the kids he coaches is the confidence he instills in them.

“He lets them know they will succeed, and they will win,” Hill said. “Whether it’s on the gym floor, in cross country or track, or on the softball diamond, he believes in them, and he trusts them.

“As much as he cared about winning, he cares about the kids individually, probably more so. The kids were more important than a win.”