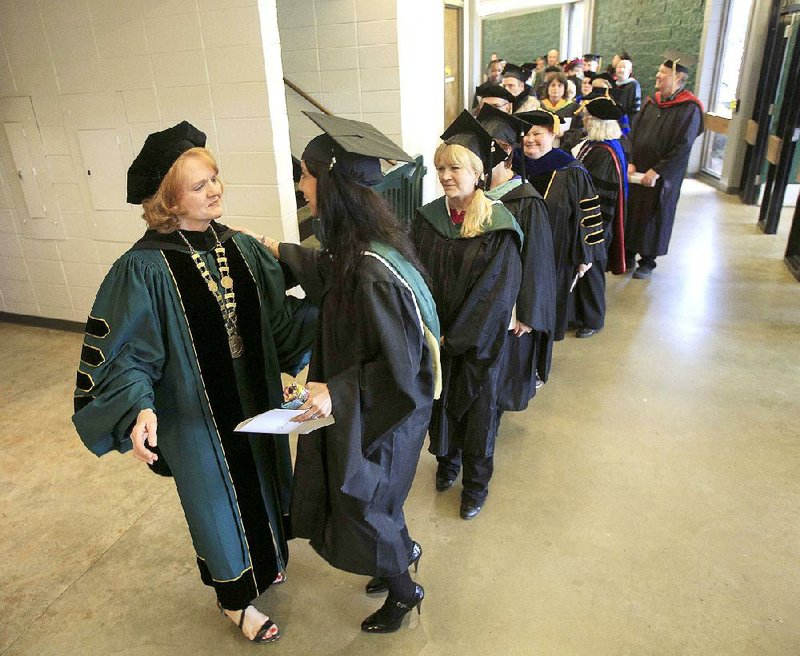 Arkansas Tech University sent public-records requests to three public universities to obtain the electronic communications of professors who signed a letter faulting the university for having a scholarship named after a former professor accused of being a Holocaust denier.

Records from one of those schools — the University of Arkansas, Fayetteville — show that untenured Arkansas Tech teacher Sarah Stein worked through other educators to encourage colleagues at the Fayetteville campus and elsewhere to sign the letter. It’s an effort that she says has prompted her supervisors and others to harass her.

The email exchanges obtained from UA include comments in which Stein criticized the way Arkansas Tech President Robin Bowen, Dean Jeff Woods of the Russellville university’s College of Arts and Humanities, and others have reacted to the scholarship issue. The records also include information that Stein cited in efforts to show that the late Arkansas Tech professor Michael Link was anti-Semitic.

Arkansas Tech has questioned the allegation against Link and has stood behind the scholarship.

“I do have a concern that they are using these [public-records] requests to try to intimidate me or to find some sort of information about me,” said Stein, who is Jewish. “I believe they are on a fishing expedition, looking for something, and they’re not going to find it. I think this is another act of retaliation.”

Stein said she communicated with other universities’ professors using her personal, rather than work, email. For that reason, Arkansas Tech would have had little, if any, way to review Stein’s emails relating to Link and the Holocaust unless it obtained them from other universities whose faculty members had interacted with her using their work emails.

No one at Arkansas Tech, including Stein, signed the letter.

“A lot of people are unwilling now to come forward” and take a stand against the scholarship, said Stein’s husband, Robert Vork, who like her teaches English at Arkansas Tech. “They see how we’re being treated. … They feared retribution from the university.”

Arkansas Tech declined to say how it might use the requested information.

“The university does not have a comment on any possible uses of the information obtained in the public-records request,” spokesman Sam Strasner said Thursday.

Bowen issued a statement saying in part: “The university does not possess evidence that Dr. Link taught Holocaust denial or anti-Semitism in his classes, and we have a responsibility to make decisions based upon facts and evidence rather than hearsay and rumors. Thus, Arkansas Tech University holds it to be true that Dr. Link is not guilty of the accusations that have been made against him.”

The University of Wisconsin-Madison refused to release correspondence that Arkansas Tech requested from three professors there, and the University of Minnesota has repeatedly and unsuccessfully asked for more information about the records request.

Arkansas Tech attorney Thomas Pennington made the request to UA on April 18 under the Arkansas Freedom of Information Act. Also that day, the south-central regional office of the Anti-Defamation League released a letter criticizing Arkansas Tech for declining to take action on a scholarship named for Link, a history professor who died in 2016, and his mother.

The public-records request sought all correspondence or electronic communications relating to Arkansas Tech, Link or the Anti-Defamation League from UA professors Richard Sonn and Jennifer Hoyer from Feb. 1 through April 18. They were among more than 40 scholars and others who had signed the letter, as were the Wisconsin and Minnesota professors who Arkansas Tech inquired about.

A $190,900 gift from Link’s estate had endowed the scholarship, which was announced in December.

Karen Hanson, the University of Minnesota’s provost and executive vice president, emailed Bowen and Arkansas Tech’s Pennington on May 17 to express concern about the request “from one academic institution to another for faculty e-mail and communications.” She asked “about the nature and purpose of this request,” relating to five professors there.

Hanson also left two voice-mail messages for Pennington. In the second one, she asked Pennington to get back to her and said, “I still have questions about both the data request and the subsequent handling of the data request.”

Strasner said Thursday that Arkansas Tech “has not determined if it will reply to the communication from the University of Minnesota.”

The University of Wisconsin-Madison said one of its professors who was inquired about is retired and the other professor’s communication with the Anti-Defamation League “was a purely personal communication.”

“We have concluded that any public interest in the disclosure of these purely personal communications evincing no violation of law or policy is outweighed by public policies recognizing the privacy interest of individuals in matters unrelated to the conduct of government business,” Lisa Hall, the Wisconsin university’s public-records custodian, wrote in a letter to Pennington.

Before the Link controversy, Stein said, she had a “good relationship” with her superiors. But now, “they basically don’t speak to me anymore,” she said.

The documents exchanged with UA also include a two-page essay in which Stein writes of Arkansas Tech administrators’ reaction after she drew “Dr. Link’s known history of Holocaust denial” to their attention in December.

“I encountered massive resistance in the History Department and throughout” the College of Arts and Humanities, she wrote. According to Stein, a colleague who works in the office of that college’s dean told her, “‘you should be worried about your job and your family more than what’s right or wrong. When are you up for tenure?’”

Stein said that during a meeting with Woods, he told her “that I was in a community that might not care about anti-Semitism and I might have to learn to live with that.”

Woods said he and Stein discussed the February arrests of 54 people, some of them Russellville-area residents and members of an Arkansas-based white-supremacist group.

“We discussed the reality that hateful, anti-Semitic people exists in the Arkansas River Valley,” Woods said in an email. “I encouraged her and all the faculty to engage in civil, collegial and honest debate.”

In one email to a UA professor, Stein said Arkansas Tech had “tried to placate us by offering that perhaps my husband and I would like to start offering Holocaust courses.” She wrote that “the implication was that our Jewishness would make us qualified to teach the topic. I had to explain that they couldn’t use their Jewish faculty to cover over their Holocaust Denial problem and that being Jewish does not magically endow one with the academic authority to speak on all Jewish topics.”

Bowen, however, said Stein and Vork “were encouraged to teach about the Holocaust before and after the announcement of the Link scholarship. The college has invested in courses and programs on the Holocaust for as long as I have been at Tech and will continue to do so.”

Critics have questioned the curriculum that Link had planned for a graduate seminar in 2005. Some students withdrew from the class, and the university did not allow Link to mention the Holocaust during the class after another history professor, James Moses, complained that Link had included three books — “anti-Semitic diatribes” — among several that students were to choose for readings.

Moses’ 2005 letter about the books to Arkansas Tech’s then-President Robert Brown was among the documents that showed up in UA’s response to Arkansas Tech’s public-records request. Stein said she had provided the letter with Moses’ permission.

In the letter, Moses wrote that Link “has asserted that he is not a Holocaust denier.”

“Then why assign known hate literature with no disclaimer attached?” Moses asked. “To what use does he plan to put these anti-Semitic diatribes in a graduate university classroom?”

Moses also wrote that a neo-Nazi press had published one of the books. “The book is a collection of three earlier works by this author, which assert that the Holocaust was a fiction perpetrated by a Zionist Jewish Communist cabal bent on world domination. … It has been [thoroughly] vilified by historians as an egregious piece of Holocaust denial.”

Moses, who noted that he is Jewish, described another of the three books as “a vile piece of filth laced with hate.”

In a 2019 letter to two Arkansas Tech administrators, Moses recalled telling the university president in 2005 about “the utter and absolute unacceptability of those books as historical works, and urged him to take action, up to and including the professor’s dismissal.”

In that letter, Moses said his colleague had “denied any attempt to deny the Holocaust, but rather stated his intent was to offer the widest possible range of views on the event.”

Moses said “punitive measures” against Link, a tenured professor at the time, included not allowing him to use the readings at issue or to address the Holocaust at all during the seminar and removing him from the graduate faculty. Link was barred from teaching any courses the next semester.

After the 2005 incident, Moses said, he was “hyper-vigilant in trying to ‘catch’ [Link] in espousing or manifesting any anti-Semitism or Holocaust denial.” But Moses said, “I never heard anything along those lines.”

Moses said he had spoken “in favor of having the professor’s name removed from the scholarship, but the university cannot do that without the permission of the estate. … It is, therefore, all or nothing.”

Moses added, “I do not defend the man. Far from it. I defend my university and my department against charges of inaction, ignorance and dereliction of duty, and I protest the misuse of my 2005 letter and misrepresentations based on it to prosecute a case through hyperbole, innuendo, and outright fabrication. I protest the wholly inaccurate portrayal of ATU as having harbored a known and habitual Holocaust denier for decades. This is simply untrue.”

“We do not and cannot know what Dr. Link’s intentions where when he included those materials on that reading list in 2005,” Bowen said. Others who worked with Link “consistently state they did not observe any anti-Semitism or Holocaust denial in” his speeches or actions.

Stein said she has received “very creepy” and “harassing” emails from white supremacists. She praised police and the FBI for working to ensure her safety.

“I didn’t believe I was doing anything wrong or anything that goes against what I’m allowed to do as a public servant,” she said. “I’m a whistleblower. I’m trying to do what’s best for the state and for the people of Arkansas and ultimately for the university and for my students.”