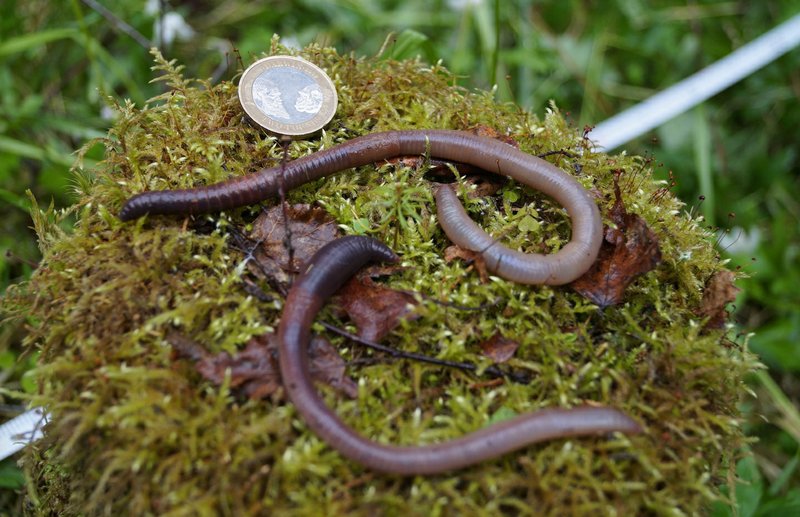 Cindy Shaw, a carbon-research scientist with the Canadian Forest Service, studies the boreal forest — the world's most northerly forest, which circles the top of the globe like a ring of hair around a balding head.

A few years ago, while conducting a study in northern Alberta to see how the forest floor was recovering after oil and gas activity, she saw something new: earthworms.

"I was amazed," she said. "At the very first plot, there was a lot of evidence of earthworm activity."

Native earthworms disappeared from most of northern North America 10,000 years ago, during the ice age. Now invasive earthworm species from southern Europe — survivors of that frozen epoch, and introduced to this continent by European settlers centuries ago — are making their way through northern forests, their spread hastened by roads, timber and petroleum activity, tire treads, boats, anglers and even gardeners.

As the worms feed, they release into the atmosphere much of the carbon stored in the forest floor. Climate scientists are worried.

"Earthworms are yet another factor that can affect the carbon balance," Werner Kurz, a researcher with the Canadian Forest Service in Victoria, British Columbia, wrote in an email. His fear is that the growing incursion of earthworms — not just in North America, but also in northern Europe and Russia — could convert the boreal forest, now a powerful global carbon sponge, into a carbon spout.

Moreover, the threat is still so new to boreal forests that scientists don't yet know how to calculate what the earthworms' carbon effect will be, or when it will appear.

"It is a significant change to the carbon dynamic and how we understand it works," Shaw said. "We don't truly understand the rate or the magnitude of that change."

The relationship between carbon and earthworms is complex. Earthworms are beloved by gardeners because they break down organic material in soil, freeing up nutrients. This helps plants and trees grow faster, which locks carbon into living tissue. Some types of invasive earthworms also burrow into mineral soil and seal carbon there.

But as earthworms speed decomposition, they also release carbon dioxide into the atmosphere. As they occupy more areas of the world, will they ultimately add more carbon to the atmosphere — or subtract it?

That question led to what Ingrid M. Lubbers, a soil researcher at Wageningen University in the Netherlands, christened the "earthworm dilemma" in a paper published in 2013 in Nature Climate Change. Scientists have been keen to resolve it ever since.

"It's just another of the many reasons why you need to know more about systems," Lubbers said. "Because there could be an effect that would enhance climate change and enhance the rising temperatures."

The boreal is special. In warmer climates, the floor of a typical forest is a mix of mineral soil and organic soil. In a boreal forest, those components are distinct, with a thick layer of rotting leaves, mosses and fallen wood on top of the mineral soil.

Soil scientists once thought that lower temperatures reduced mixing; now, they wonder if the absence of earthworms is what made the difference.

This spongy layer of leaf litter contains most of the carbon stored in the boreal soil. As it turns out, most of the invading earthworms in the North American boreal appear to be the type that love to devour leaf litter and stay above ground, releasing carbon.

Erin K. Cameron, an environmental scientist at Saint Mary's University in Halifax, Nova Scotia, who studies the boreal incursion of earthworms, found that 99.8% of the earthworms in her study area in Alberta belonged to Dendrobaena octaedra, an invasive species that eats leaf litter but doesn't burrow into the soil.

In 2015, Cameron published the results of a computer model aimed at figuring out the effect on leaf-litter over time. "What we see with our model is that forest-floor carbon is reduced by between 50% and 94%, mostly in the first 40 years," she said. That carbon, no longer sequestered, goes into the atmosphere.

The global boreal forest is a muscular part of Earth's carbon cycle; at least one-fifth of the carbon that cycles through air, soil and oceans passes through the boreal, said Sylvie Quideau, a soil biogeochemist at the University of Alberta in Edmonton. Currently, the boreal absorbs more carbon from the atmosphere than it adds, but that is changing.

On one hand, higher temperatures could extend the growing season, allowing trees to grow bigger and store more carbon, said Kurz, the forest researcher in British Columbia. But rising temperatures also release carbon to the atmosphere, by thawing permafrost and increasing the number of forest fires.

All told, he sees earthworms as another factor — if not the main one — nudging the boreal toward becoming a global source of carbon.

In northern Minnesota, the boreal forest has slowly been invaded by earthworms. They have altered not just the depth of the leaf litter but also the types of plants the forest supports, said Adrian Wackett, who studied earthworms in the North American and European boreal forest for his master's degree at the University of Minnesota at St. Paul.

Endemic species such as the pink and white lady's slipper — Minnesota's state flower — as well as ferns, orchids and the saplings of coniferous trees rely on the spongy layer of leaf litter.

As earthworms feast on that layer, they allow nonnative plants such as European buckthorn and grasses to thrive, which in turn push out endemic plants. This process, combined with the effects of warming over time, could slowly transform Minnesota's boreal forest into prairie, Wackett said.

"Even though worms themselves are tiny and don't individually seem to constitute a threat, when you think of how many of them there are, they're very important organisms, for the good or the bad," Wackett said.

Last summer, Wackett and his supervisor, Kyungsoo Yoo, a soil scientist at the University of Minnesota, found that invasive earthworms have also spread to parts of Alaska's boreal forest, including the Kenai National Wildlife Refuge.

To his horror, Yoo also found earthworms right on the edge of the permafrost in the northern boreal. The pace of permafrost melt and its release of carbon is of great concern to researchers who model climate change.

His biggest concern is that earthworms will penetrate even farther north in the boreal and spread into the permafrost. "Their impact alone could be quite devastating, based on what we have been seeing in Minnesota and New England and in parts of Canada," Yoo said.

No mechanism exists to eradicate earthworms from the boreal forest; their effect is permanent. However, earthworms move less than 30 feet a year on their own. Educating people to not transport them into unaffected parts of the forest might help keep those areas earthworm-free, Wackett said.