Pulaski County officials have closed the Big Dam Bridge due to rising water levels on the Arkansas River.

The U.S. Army Corps of Engineers Little Rock District requested county officials close the span stretching from Little Rock to North Little Rock because the surface of the Arkansas River is approaching a pumping station that is part of Murray Lock and Dam, said Cozetta Jones, spokeswoman for the county.

Officials were closing the gates on the Little Rock side of the bridge and cutting power to its lights, according to Jones.

Jones said the gates on the North Little Rock side of the bridge were closed over the weekend.

The corps of engineers were also fortifying the lock and dam, situated beneath the bridge, against rising floodwaters, said Laurie Driver, spokeswoman for the Corps.

“The structures on the Arkansas River in Arkansas are not built to hold back floodwaters,” Driver said. “They’re there to hold back water in low-water conditions to ensure we have a 9-foot channel for barge traffic.”

In addition to placing sandbags around vulnerable parts of the structure, mechanics have removed handrails that might capture debris caught in the rising water.

The lock and dam was closed to river traffic on Friday, Driver said.

Jones said that the Corps of Engineers called county officials on Monday to request the pumping station be shut off.

“Once the water reaches their parking lot they’re leaving,” Jones said. “Everything needs to be shut off.” 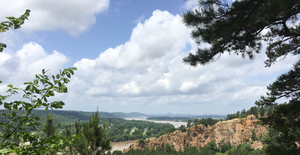 Photo by Josh Snyder
The Arkansas River, with the Big Dam Bridge in the background, seen from Emerald Park in North Little Rock on Tuesday. Officials have closed paths near the bridge to vehicle and pedestrian traffic as the rivers's water continues to rise.
ADVERTISEMENT