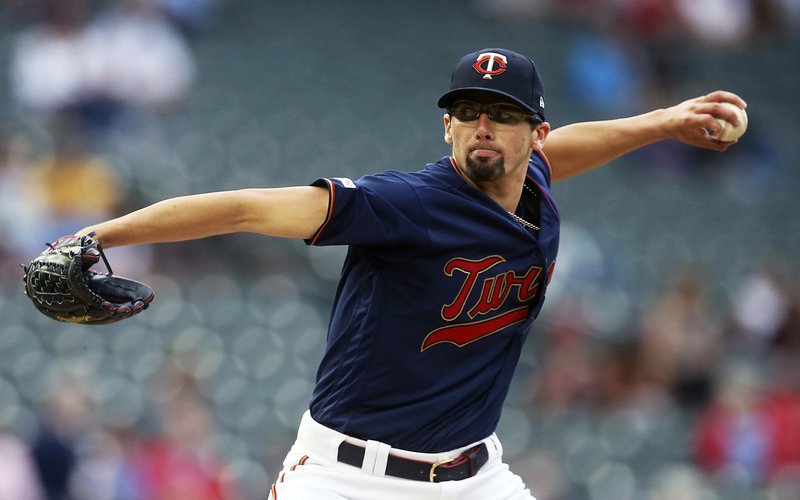 Minnesota Twins pitcher Devin Smeltzer, making his Major League debut, throws against the Milwaukee Brewers in the first inning of a baseball game, Tuesday, May 28, 2019, in Minneapolis. (AP Photo/Jim Mone)

Diagnosed with a grapefruit-sized cancerous tumor against his bladder when he was just 9 years old, Smeltzer wasn't deterred in his goal to reach the majors. The 23-year-old got his chance this week after the Twins put pitcher Michael Pineda on the injured list with right knee tendinitis.

Smeltzer left with the game scoreless and got a no-decision.

In nine combined starts at Class AA Pensacola, Fla., and Class AAA Rochester, N.Y., Smeltzer was 3-2 with a 1.15 ERA. Facing the Brewers, he retired his final eight Brewers, striking out Lorenzo Cain and Christian Yelich to end the sixth.

Smeltzer danced around damage in the second, third and fourth innings when, with a runner on base, the final out each inning was a catch on the warning track.

The Twins got Smeltzer last July in a trade that sent second baseman Brian Dozier to the Los Angeles Dodgers.

Smeltzer is the fourth Twins starter in team history to throw at least six shutout innings in his major league debut. Andrew Albers, Anthony Swarzak and Eric Milton are the others.

Eddie Rosario homered and Max Kepler added a two-run double for Minnesota, which has won 12 of 14 and has the best record in the majors.

PADRES 5, YANKEES 4 Eric Hosmer hit a three-run home run during a big first inning against Masahiro Tanaka and visiting San Diego survived a three-run rally in the seventh inning to earn a victory over New York.

REDS 11, PIRATES 6 Derek Dietrich hit three home runs -- all two-run shots -- to lift host Cincinnati over Pittsburgh. Dietrich connected in the fourth off Jordan Lyles (5-2), who left after the inning with discomfort in his left hamstring. Dietrich then connected off Geoff Hartlieb in the fifth and again in the seventh for his first three-homer game.

WHITE SOX 2-4, ROYALS 1-3 Lucas Giolito struck out 10 while winning his fifth consecutive start as host Chicago posted two victories over Kansas City. Hours after Yolmer Sanchez hit an RBI single in the ninth inning to give the White Sox a victory in the resumption of a suspended game, Giolito (7-1) gave up a three-run home run to Alex Gordon in the first inning but allowed only 3 hits over 8 innings to improve to 6-0 in his past 8 starts.