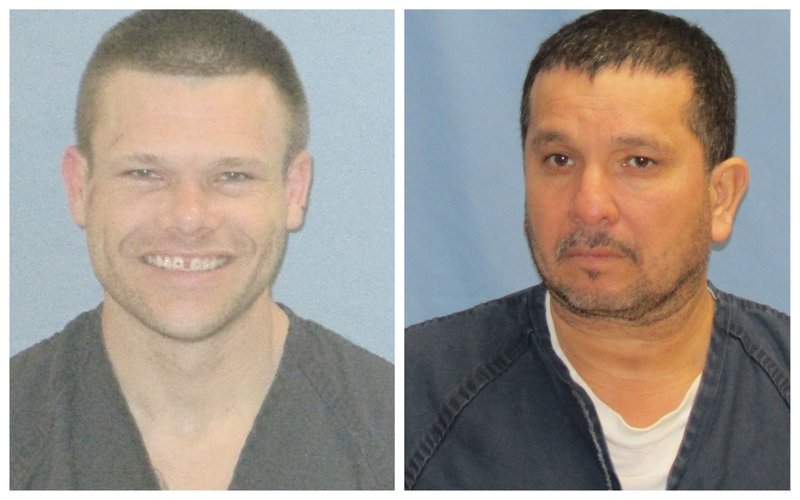 Two inmates, including one with a "history" of escape, fled from the Pulaski County jail after the pair reportedly broke a hatch and tore through a ceiling, authorities said.

Jail staff noticed Jason Michael Brown, 31, and Geronimo Espericueta, 47, were missing from the Roosevelt Road facility shortly before 2:15 a.m. Thursday. The jailbreak happened sometime after 9 p.m. the prior evening, according to Pulaski County sheriff’s office.

Investigators believe the pair broke a lock on a hatch, got onto the roof by tearing through the ceiling and then fled from the area, authorities said.

“We’re checking all the places where we think they could be going,” Burk said, adding that authorities aren’t sure if the two men are traveling together.

Brown was booked in on April 30 on robbery, burglary and theft charges. Espericueta had been held since March 27 on drug charges.

Brown has a “history of escaping” from at least one jail, Burk said, and court records show he’s had multiple criminal convictions.

In 2011, Brown broke out of the Craighead County jail along with two other inmates, according to court records. He pleaded guilty to escaping after U.S. Marshals arrested him at a Florida mobile home park east of Tampa, the records show.

Burk said the county jail has seen about three or four escapes in the past 25 years or so.

Among them was a 1993 escape involving three inmates who breached the facility’s walls with a torch, a ladder and help from an outside accomplice, according to past reports.

But Thursday’s escape was the first time Burk recalled an inmate tore a hole through a ceiling.

Areas of the jail, including the hatch the men reportedly broke in the latest escape, were built in the 1970s. Burk said a lock on the hatch wasn’t very strong.

The lowest point of the building is about a single story high.

The jail is located at 3201 W. Roosevelt Road, which is east of Asher Avenue.