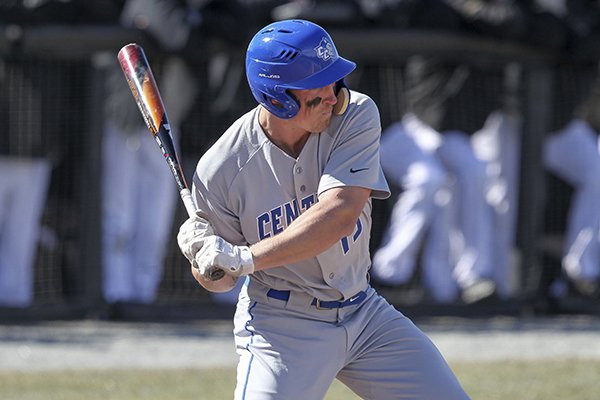 "I try to do as much research as I can and follow series happening around the country," Hickey said. "I respect the process. I take responsibility in trying to do it right."

Hickey, one of 31 coaches who vote in the USA Today poll, ranked the University of Arkansas No. 5 this week.

"I've tracked Arkansas from afar and seen their consistency throughout the year," said Hickey, who is in his 20th season at CCSU. "I know they're a very talented and well-coached team."

Hickey will get an up-close look at Arkansas at the NCAA Fayetteville Regional.

The Blue Devils (30-21), who earned an automatic bid by winning the Northeast Conference Tournament, play the Razorbacks (41-17) at 1 p.m. Friday at Baum-Walker Stadium.

"I was excited when I saw we were playing at Arkansas, because it's going to be something different," Hickey said. "We've been to places like Arizona State, Texas, TCU. It's neat going to see these passionate fan bases of college baseball that in reality we don't have up in the Northeast."

Arkansas is the No. 5 national seed, top seed in its regional and No. 6 in the NCAA's Ratings Percentage Index, which ranks teams based on their performance and strength of schedule. The Blue Devils are the regional's No. 4 seed and ranked 184th in the RPI.

"There's a reason why Arkansas is hosting the regional and is a national seed," Hickey said. "I'm not unrealistic.

"The success rate is not high for 4 seeds, but the experience can be great. The memories for these kids getting to play in this sort of environment -- on this stage -- is something that nobody's going to take away from them."

Northeast Conference teams are 1-45 in NCAA regional games, but the conference's lone victory came against Arkansas.

Bryant beat Arkansas 4-1 in the Manhattan (Kan.) Regional in 2013. The Razorbacks came back to beat the Bulldogs 12-3 before losing to Kansas State 4-3.

This season Bryant won the Northeast regular-season title, but CCSU beat the Bulldogs 3-1 and 3-2 to win the conference tournament.

"We're proud of our program and what we've done while understanding the realities of college athletics and the Power 5 conferences, and the not Power 5s," Hickey said. "We appreciate and understand the difference, but we're going to enjoy this opportunity and the time we spend in Arkansas."

Redshirt sophomore first baseman TT Bowens leads CCSU with a .386 batting average and has 4 home runs, 12 doubles and 21 RBI in the past 29 games since coming back from knee surgery.

"It was huge to get TT back because he's a guy in the middle of the order we can build around," Hickey said. "Some guys had been pressing and trying to do more than they were capable of, and now they realize that all they need to do is have good at-bats and do situational hitting.

"The biggest thing TT's done for us is provide some power. Instead of having to put three singles together to score a run, when you hit a double it's easier."

"Our strength has been an experienced pitching staff and playing good defense," Hickey said.

The Blue Devils drew a total of 2,542 for their home games this season and averaged 134 spectators per game.

"Trying to play in March and April in the Northeast, it's usually 42 degrees with the wind blowing, and you're getting moms and dads and girlfriends to come to the games," Hickey said. "It's just the reality of the college baseball season here."

When the Razorbacks opened their home regional last year with an afternoon game, they drew an announced crowd of 9,215 for their 10-2 victory over Oral Roberts University.

"I hope there's a big crowd on Friday for our game," Hickey said. "There's going to be some nerves and jitters. These are still just college kids.

"But hopefully they can go out and play up to their ability and enjoy this experience, because I remember every regional I've been to and for the most part they've been terrific."

The Friars lost to Jacksonville (Fla.), then won two games against The Citadel before being eliminated by host Florida State. Providence then dropped baseball after the season for financial reasons.

Hickey's Blue Devils are 0-10 in NCAA Tournament games. Their closest game was a 6-5 loss to Dallas Baptist in 2017.

"Our season isn't based on this weekend. The fact that we're still playing already proves it's been a very good year."