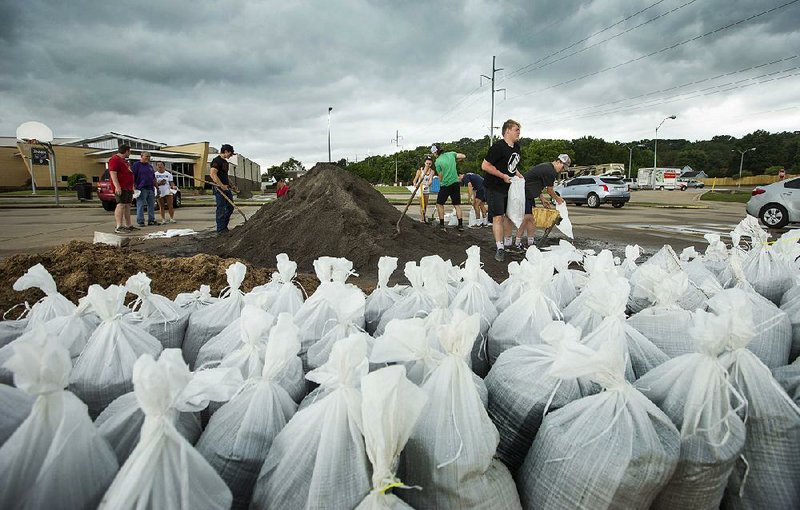 Volunteers, including members of the Greenwood High School football team, fill sandbags Wednesday at East Side Baptist Church in Fort Smith. They also helped load them into vehicles.

Rising water from the Arkansas River has already shut down a road in western Pulaski County.

County Farm Road has been closed and several homes connected to it have been evacuated, according to Cody Burk, a spokesman for the Pulaski County sheriff's office.

"That is our main trouble area," Burk said "We have put up barricades and have deputies on the scene, and they will be there around the clock.

"We got extra people working right now to make sure everyone is safe."

The Arkansas River is experiencing historic flooding created by an influx of water flowing into the state from Oklahoma. Flooding is occurring in communities across western and central Arkansas as the water makes its way through the state.

Much of the floodwater is still working its way through the River Valley, but officials in Pulaski County are already preparing for flows that are expected to crest early next week in Little Rock.

Steve Owen, general manager of Little Rock Yacht Club near Pinnacle Mountain in western Pulaski County, said the water at the club was 10½ feet higher than normal Wednesday afternoon and is expected to rise another 2 feet. 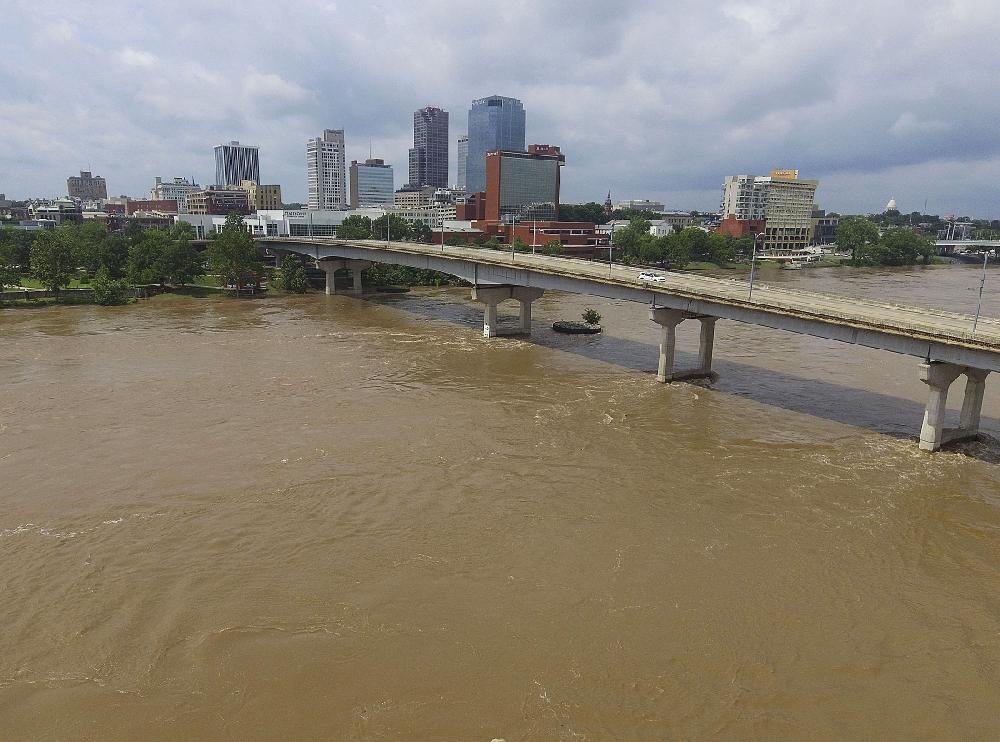 The Arkansas River flows swiftly near downtown Little Rock on Wednesday. The river is expected to crest Monday in Little Rock at 28 feet, considered a major flooding event.

"The boats are fine in their slips," Owen said. "The challenge is getting out to the slips. We have put up some extra ramps for people to get to their boats. People can stay on their boats, but we sure don't recommended anyone getting on the river because it's moving fast."

The river is expected to crest in Little Rock at 28 feet Monday, city emergency management specialist Nathan Spicer told the city board Tuesday evening. That height is below the city's record, but it would still be considered a major flooding event and the most severe flooding Little Rock has experienced since 1990, Spicer said.

Rainfall is predicted throughout the state over the next few days, according to the National Weather Service in North Little Rock. It won't make the floodwater rise higher than 28 feet, Spicer said, but it will prolong the flood's effects.

"This flood event could last for two, three weeks, maybe a month," he said.

Little Rock Mayor Frank Scott Jr. expressed appreciation for the work of state and local officials in preparing for the flooding. 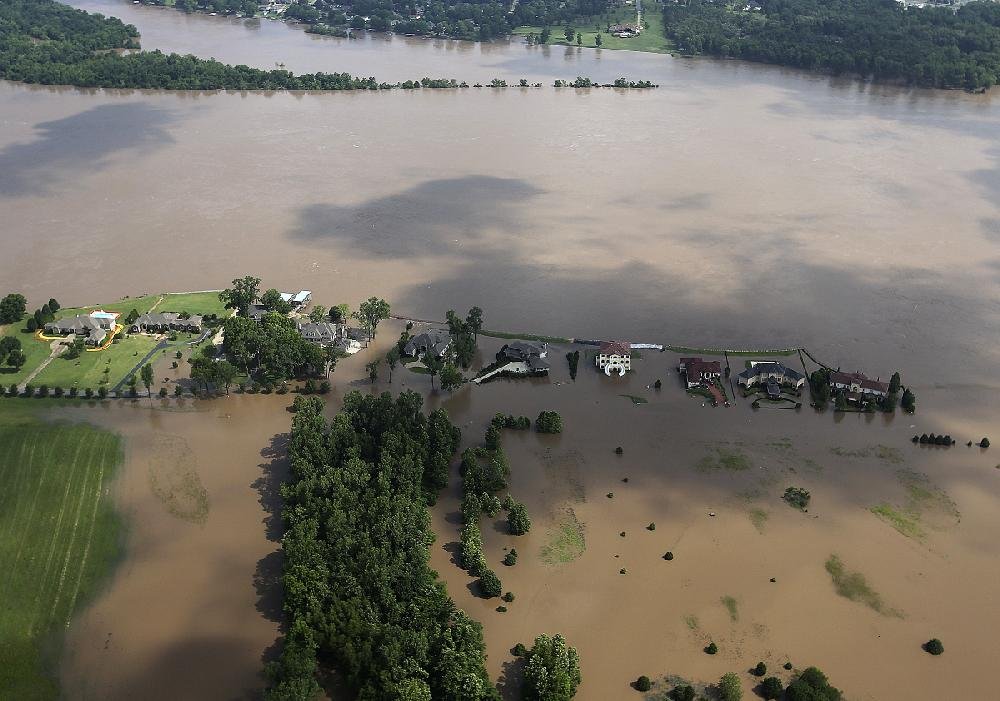 Water from the Arkansas River (top) flows over homes Wednesday near Two Rivers Park in Pulaski County. Nearby County Farm Road has been closed and several homes there have been evacuated, Cody Burk of the Pulaski County sheriff’s office said. More photos are available at www.arkansasonline.com/530flooding/.

"I definitely want to stress that the impending flood impacts is something we're going to be dealing with for the better part of the next month or two months, and we're doing all that we can," Scott said.

Little Rock will close the Riverdale levee on Friday at the intersection of Riverfront Drive and Cottondale Drive to protect property inside the levee system.

"The project will require total road closure," city spokesman Lamor Williams said in a news release. "Entrance into the Riverfront area will still be possible along Cedar Hill Drive and Riverdale Road."

Scott, Public Works Director John Honeywell, Fire Chief Delphone Hubbard and Police Chief Keith Humphrey will hold a news conference at 2 p.m. today in the Board of Directors meeting room at City Hall to brief the public on the flooding. The news conference will be streamed live at littlerock.gov and on the city of Little Rock's Facebook page. 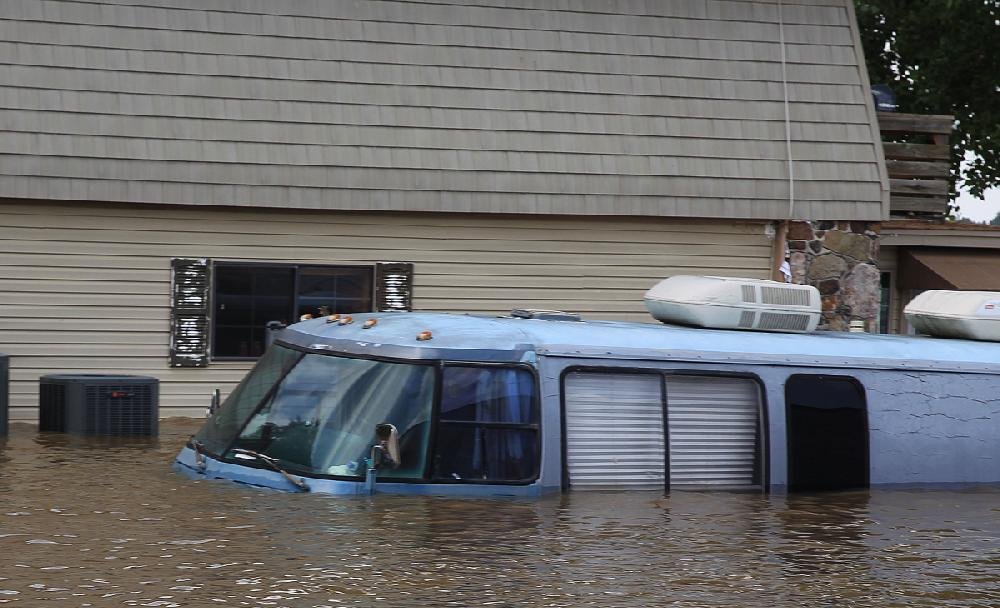 A motor home is covered in floodwaters up to its windshield Wednesday in the Island Harbor Estates neighborhood of Pine Bluff. Most of the homes in the neighborhood were getting at least some flooding Wednesday.

About 40 homes in North Little Rock could be affected by the rising Arkansas River, according to Nathan Hamilton, a spokesman for the city.

"The homes are pretty close to the river except for the Dixie Addition, which is about a mile away but has some drainage issues," Hamilton said.

"We have knocked on every door and will assist with any evacuation process. We have shelter on standby, but we don't expect to have to use it."

Hamilton said North Little Rock doesn't expect to have to close the "sea wall" gates, but if it does it would only take a few hours.

"If water overtakes some of the roads, there are enough roundabout ways to get where you are going that we don't expect it to affect traffic," Hamilton said. "These areas have been hit with water before. We don't anticipate it going anywhere new, really."

North Little Rock has been preparing for potential floodwaters for more than a week, Hamilton said.

"We are not going to be hit by surprise or anything like that," Hamilton said.