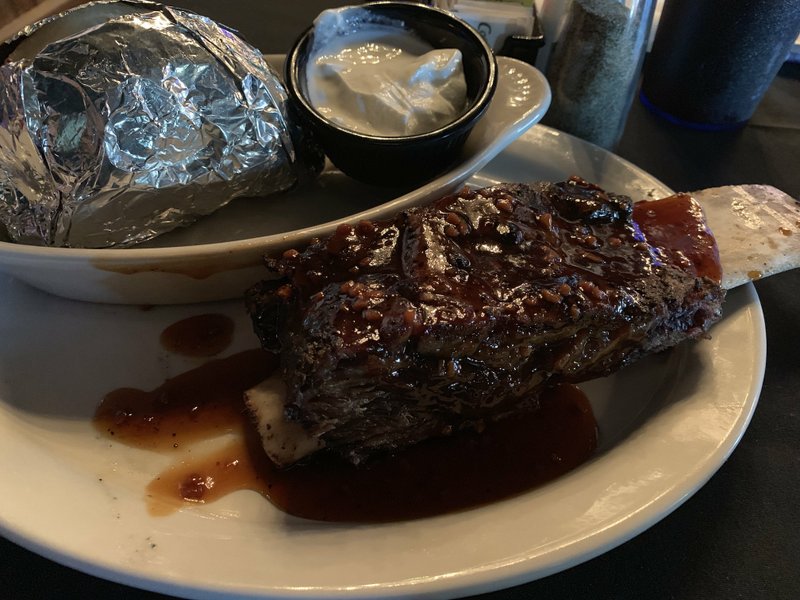 The barnlike restaurant space in a strip center at 10840 Maumelle Blvd., just on the North Little Rock side of Maumelle and just east of a resurrected bagel shop, has had two previous unsuccessful tenants.

The first, Nashville Bar and Grill, had a somewhat checkered start (there were a lot of doubts and questions about its owner and his claims that he was establishing a coast-to-coast chain of some kind, with little or no evidence of its existence).

Its successor, GiGi's Soul Food Cafe and Lounge, had unquestionably good and honest bona fides and big plans that included soul music, but just never managed to bring in enough customers to make a go of it.

Now comes South Boulevard, which has at least one leg up at its start: owner Jermaine Burton has industry experience, owning and operating Maumelle's successful Lucky's Sports Bar & Grill. Two other basic building blocks for success are solid: The kitchen does a good job of handling well the fusion menu, which includes steaks, sandwiches, salads and seafood but also Korean barbecue wings, Asian-glazed ribs and bulgogi, and a friendly — perhaps overly friendly — staff that creates a genial and congenial dining experience.

The main dining room is cavernous, with sturdy, black-clad hardwood tables that seat several dozen and a row of five elevated booths on the back wall. A corrugated-metal-fronted full bar lines an adjoining wall. Opposite there's a large, bare stage with a preposterously yellow-painted piano; apparently it's currently used for karaoke but there's at least potential for various forms of live entertainment.

What had started out as a front patio is now fully enclosed (but with garage-style doors that can open it back up to the noise of busy Maumelle Boulevard) to create a second bar space, dining room and game room (well, there's a pool table), but since they're still awaiting the installation of an adequate air conditioning unit, it's currently too warm to handle any kind of daytime business, so it has been temporarily sheeted off.

Five fancy chandeliers provide surprisingly dim lighting, all the more frustrating because the tiny type on the temporary menus would be hard enough to read even if the light was brighter. The soundtrack runs the gamut from contemporary country to classic rock — specifically, on our first visit, from Taylor Swift to "Tiny Dancer."

The very filling Stuffed Mushrooms ($9.99) could easily serve two — the menu says five medium mushrooms, but there were actually seven, topped with a slightly gummy seafood blend (we couldn't identify what the seafood was, and in any case it was largely bread crumb filler) in an Alfredo sauce and topped with a thick layer of baked parmesan. The creaminess of the sauce was surprising and, at first, a little off-putting, but the dish grew on us as we progressed through it.

The Spicy Pollock Bites (also $9.99) were less of a surprise and less filling, a dozen fish nuggets in a slightly crunchy batter, not that spicy at the outset but the spice gradually accumulated toward the backs of our throats. We were initially suspicious of the Sriracha-tartar sauce but it actually complemented the fish without substantially compounding the spice quotient.

The big-winner entree was the Asian Glazed Ribs ($19.99), actually one Godzilla-size Asian-glazed rib. The menu identifies it as beef but it could have come from the drive-thru order the Flintstones got in the opening sequence of the animated TV show. The meat was certainly tender, though a bit fatty, and came easily off the spade-size bone, so we almost didn't need our knife. (Southern Boulevard's silverware is cheap food-service grade, one of the few areas where the management has disappointingly cut corners.) The rich barbecue sauce, which spilled over onto the plate, had a distinguishable and agreeable hoisin flavor.

The Salmon Filet (also $19.99) was simple but also successful: a 6-ounce portion of well-grilled fish about the size of a pack of playing cards (just what your average dietitian recommends) topped with "our signature spices" and served on a bed of somewhat soupy but tasty rice pilaf.

Entrees come with a choice of side dish — our gooey Mac-n-Cheese was actually shells and actually al dente. We also had a decent baked potato, which you can load up for an additional $1.99 — and a side salad of primarily mixed greens and cucumber; we enjoyed both dressings we tried, a rich, tangy and sufficiently chunky bleu cheese and the zippy house champagne vinaigrette.

We mentioned the staff was friendly; our servers were actually a bit clingy (the one on our first visit called us "dear" so often we wondered if we'd sprouted antlers), except when it came time to bring us our check; it wasn't that they couldn't be found, it was that on both occasions they were engaged in lengthy conversations with folks at other tables.

Moreover, on both visits, just about every member of the staff, including management, servers, hostesses, stopped by to ask if everything was OK and if we needed anything else. (Hint, folks: If we had needed anything else, surely we would have told the person who had just stopped by less than 60 seconds prior.)