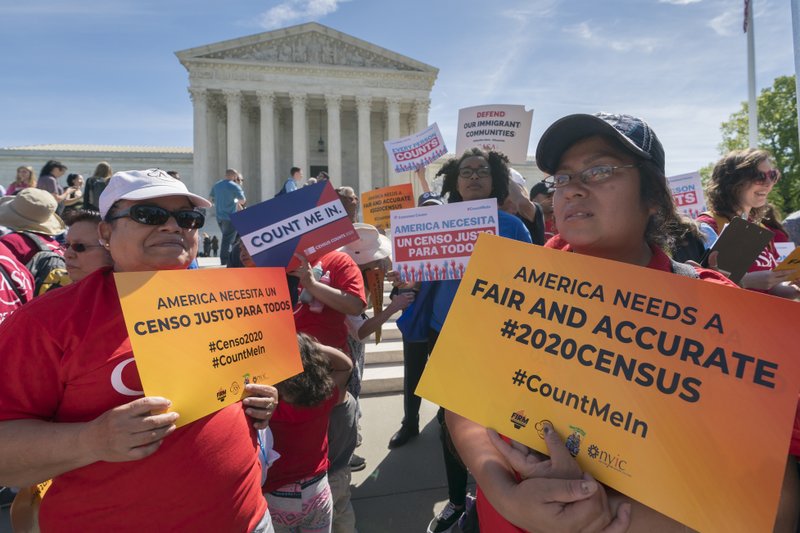 FILE - In this April 23, 2019 file photo, immigration activists rally outside the Supreme Court as the justices hear arguments over the Trump administration's plan to ask about citizenship on the 2020 census, in Washington. A new court filing Thursday, May 30 by lawyers opposing adding the citizenship question to the 2020 census alleges a longtime Republican redistricting expert played a key role in making the change. (AP Photo/J. Scott Applewhite, File)

NEW YORK -- A Republican redistricting expert advocated for adding a citizenship question to the 2020 census to give an electoral edge to whites and Republicans, opponents of the move alleged in a court filing Thursday.

The filing in Manhattan federal court said a trove of newly discovered documents revealed that Thomas Hofeller played a key role in pushing President Donald Trump's administration to include a citizenship question on the census for the first time since 1950.

Lawyers for opponents of adding the question said the files, found on Hofeller's computer drives after he died last year, also showed that he contributed vital language to a Justice Department letter used to justify the question on the grounds that it was needed to protect minority voting rights.

In reality, the lawyers argued, the documents show the census change is part of a wider Republican effort to restrict the political power of Democrats and Hispanic communities.

"The new evidence reveals that Dr. Thomas Hofeller, the longtime Republican redistricting specialist, played a significant role in orchestrating the addition of the citizenship question to the 2020 Decennial Census in order to create a structural electoral advantage for, in his own words, 'Republicans and Non-Hispanic Whites' and that defendants obscured his role through affirmative misrepresentations," the filing said.

The Justice Department denied those allegations in a statement released late Thursday, calling them an "an unfortunate last-ditch effort" to derail a U.S. Supreme Court decision on the legality of adding the citizenship question.

The change was announced in spring 2018. The U.S. Supreme Court, which heard arguments in April, is likely to rule by July.

States, cities and rights groups had sued in New York and elsewhere, arguing that the question would suppress the count of immigrants and strengthen congressional representation and funding for areas where mostly Republicans reside. States with large numbers of immigrants tend to vote Democratic.

Lawyers for Trump's administration say the commerce secretary has wide discretion to design the census questionnaire.

On Thursday, lawyers for groups including the American Civil Liberties Union said that the files show that a Justice Department official and a transition official for Trump testified falsely by hiding Hofeller's role in asking for the question. They asked U.S. District Judge Jesse Furman to issue sanctions or consider finding individuals in contempt.

Furman gave the Justice Department until Monday to respond. An official with the department declined to comment on the record.

Furman set a hearing in the case for Wednesday.

Dale Ho, director of the ACLU's voting rights project and a lawyer who argued against adding the citizenship question before the Supreme Court, said documents found after Hofeller's death last year revealed the administration's "goal was to dilute the voting power of minority communities. That's literally the diametric opposite of what the administration has been saying all along."

It's not yet clear if the Hofeller documents might affect the pending Supreme Court case.

"We are considering all options right now," Ho said.

The Hofeller documents cited by lawyers were discovered when his estranged daughter found four external computer hard drives and 18 thumb drives in her father's Raleigh, N.C., home after his death last summer.

Information for this article was contributed by Emery P. Dalesio of The Associated Press.