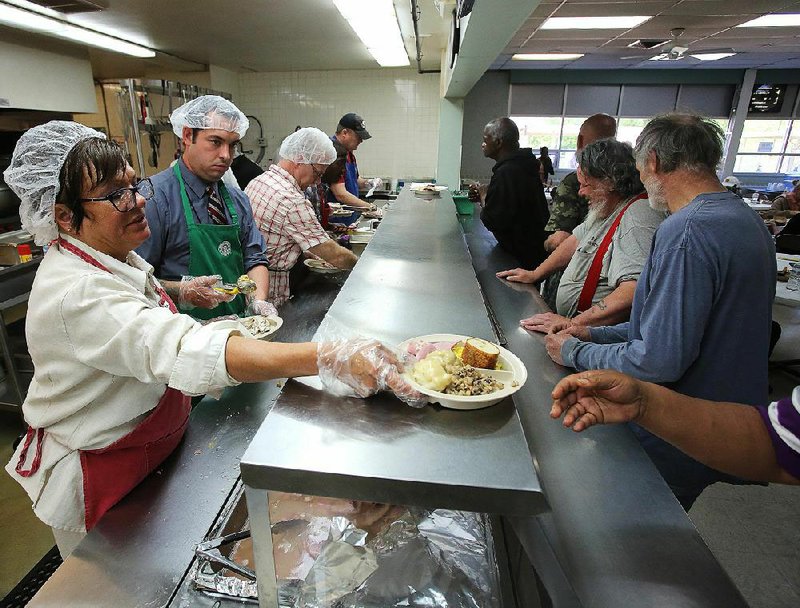 Melissa Caulder hands out a plate of food during the Easter lunch at the Little Rock Compassion Center on Sunday, April 21, 2019, in Little Rock. ( Thomas Metthe)

Homeless people living in camps along the engorged Arkansas River were warned of the impending flood, but many lost their possessions, service providers said Thursday.

The rising waters resulted in an increase in people seeking meals and replacement of lost clothing, said pastor William Holloway, founder and director of the Little Rock Compassion Center, a homeless shelter.

Holloway said that his shelter is serving between 700 and 800 meals per day. Normally, shelter workers give out between 500 and 600 meals each day.

Some of those meals are going to seasonal workers who aren't homeless, but can't buy food because they are out of work until the weather improves, he said.

"The numbers are just really high up there," he said of the people the center is serving. "It's a lot different than it has been. It's changing, and I'm hoping that this water goes away quick."

The increased number of visitors to the shelter has strained its resources, especially food and personal hygiene items, Holloway said.

Aaron Reddin, founder of The Van, said that in the days before the water began to rise, he and other volunteers started warning people that they would need to move to higher ground. He added that the flooding has highlighted the need that people have for shelter.

The Van takes food, clothing and other supplies to people who are living in the streets or camping.

Preliminary numbers from the most recent census of the homeless population in Lonoke, Prairie, Pulaski and Saline counties showed that there were 1,066 homeless people in the area during one night in January. Of that number, 573 were staying outside rather than in a homeless shelter.

In 2017, the last full count of the region's homeless population, volunteers counted 990 homeless people and 550 of them were unsheltered.

Gala Tallent, the founder of Street Ministry, a Little Rock group that takes food to people who live outside, said she's seen an increase in people camping in recent months. Many of those had to move before the flooding reached central Arkansas, she said.

She said she started helping people move to higher ground as soon as she heard about the flooding. She visited camps several times to make sure everyone who needed help had moved.

"All of my people are safe," she said.

Many are staying with friends at other camps or going to shelters if they can, Tallent added. She plans to help find new tents for those who lost theirs and seek volunteers to help them return to their camping spots after the ground dries, she said.

Reddin said he has been double-checking campsites that could be affected, although he's already told everyone they need to move.

"We don't take it lightly after having our friend Terry swept away a year or two ago," he said.

Terry Coffey, who was homeless, drowned in a flash flood in 2017 while she was asleep with her husband in a tent. She was 36. The water swept the husband away, but he survived.

Reddin said that, because of the advance warning, the problem isn't "too terrible and nothing insurmountable," but that he's worried people will be forced to move from their new locations.

"What I'm worried about most right now is that folks will have to move back to places they've already been evicted from," he said. "I'm just hoping that the powers that be will give them grace until that [flooding] subsides."