Trump’s impulsiveness said to be among worries in Beijing by Compiled by Democrat-Gazette staff from wire reports | November 1, 2019 at 2:15 a.m. 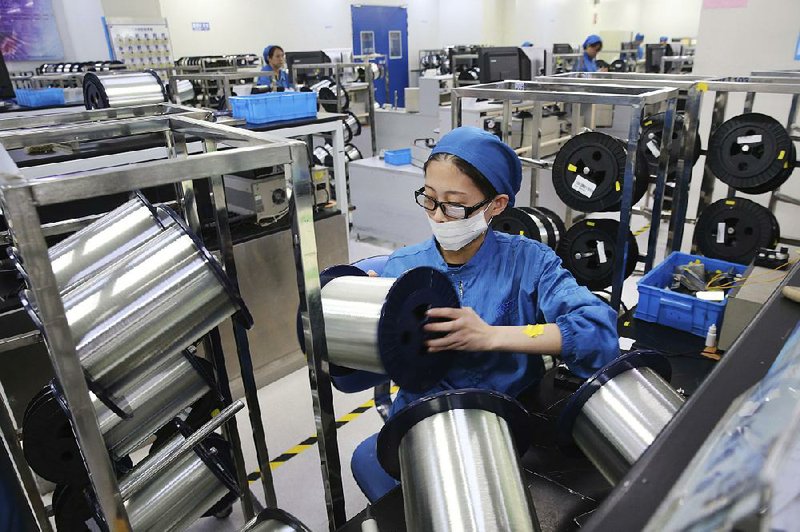 A woman works earlier this year on a production line in a fiber-optics factory in Nantong, China. An industry group reported Thursday that China’s factory activity shrank more sharply than expected in October amid weak consumer demand and a tariff war with Washington.

Chinese officials are casting doubts about reaching a comprehensive long-term trade deal with the U.S. even as the two sides get close to signing a "phase one" agreement.

In private conversations with visitors to Beijing and other interlocutors in recent weeks, Chinese officials have warned that they won't budge on the thorniest issues, according to people familiar with the matter. They remain concerned about President Donald Trump's impulsive nature and the risk he may back out of even the limited deal both sides say they want to sign in the coming weeks.

As Chinese policymakers gathered in Beijing for a key political meeting this week, some officials relayed low expectations that future negotiations could result in anything meaningful -- unless the U.S. is willing to roll back more of the tariffs. In some cases, they've urged American visitors to carry that very message back to Washington, the sources said.

Chilean President Sebastian Pinera threw up another hurdle when he announced Wednesday that the country had canceled the Asia-Pacific Economic Cooperation summit Nov. 16-17 -- where Trump and China's Xi Jinping hoped to meet -- because of social unrest in the country.

In a tweet on Thursday, Trump said the search is ongoing for a new location for Xi and him to sign the deal, which he said would be "about 60% of total deal."

That first step, according to the Trump administration, is meant to lead to a more comprehensive agreement involving more substantial economic changes than those contained in the proposed initial phase. But Chinese officials are skeptical, saying that would require the U.S. to withdraw tariffs in place on some $360 billion in imports from China -- something many don't see Trump being ready to do.

The people familiar with China's position said the tariffs don't all have to be removed immediately, but they must be part of the next stage. China also wants Trump to cancel a new wave of import taxes set to take effect Dec. 15 on American consumer favorites such as smartphones and toys as part of the phase one deal, the sources said.

Beijing is open and willing to continue talks after an initial phase, but both sides recognize that it will be very difficult to reach an agreement on the deep structural changes the U.S. is pushing for, said one Chinese official familiar with the talks.

China has stated for months that a final deal must include the removal of all punitive tariffs, and has balked at changes in areas such as state-run enterprises that could jeopardize the Communist Party's grip on power. It's politically unfeasible for Xi to accept any deal that would keep the punitive tariffs: Nationalists in the party have pressured him through state-run media editorials to avoid signing an "unequal treaty" reminiscent of those China signed with colonial powers.

So far, U.S. Trade Representative Robert Lighthizer and his team, which declined to comment, have been adamant that the duties on $250 billion in Chinese goods -- imposed early in the trade war -- be maintained over the long term as a way to enforce any commitments China makes.

The questions over the future of negotiations reflect a change in U.S. strategy. After ramping up tariffs and pressure on China over the summer and saying he would settle only for an all-encompassing agreement, Trump in early October shifted to the step-by-step approach.

The first phase, which negotiators are still trying to nail down, is expected to include a resumption of Chinese purchases of U.S. farm goods and other products such as aircraft.

It's also expected to include Chinese commitments to protect American intellectual property and an agreement by both sides not to manipulate their currencies. In return, Trump agreed not to go ahead with an Oct. 15 tariff increase and aides have raised the possibility of canceling the Dec. 15 levies.

But missing from the deal now taking shape are many of the deeper economic changes such as alterations to the schedule of government subsidies Chinese companies benefit from that the Trump administration -- and American businesses -- have been seeking, raising questions over whether the economic cost of Trump's trade assault will have been worth it.

Trump has sought to preempt criticism that he's getting little from China by arguing that the tougher issues will be dealt with in future phases. "Phase two will start negotiations almost immediately after we've concluded phase one," he said last month.

In Beijing, China's leaders affirmed support Thursday for private business within its state-dominated economy but, after a planning meeting, gave no sign of initiatives to boost sagging growth.

The annual gathering of the Communist Party's Central Committee came as companies and investors are watching for interest-rate cuts or other steps to shore up China's weakest economy in nearly three decades.

A party statement said state-owned industry is the "main body" of the economy. But it promised to "unswervingly support" entrepreneurs. It also affirmed a promise first made in 2013 to give market forces the "decisive role" in allocating resources.

China's factory activity shrank more sharply than expected in October after weak consumer demand and a tariff war with Washington, a survey by an industry group showed Thursday.

Information for this article was contributed by Shawn Donnan, Jenny Leonard, Steven Yang, Miao Han and Zoe Schneeweiss of Bloomberg News and by staff members of The Associated Press.