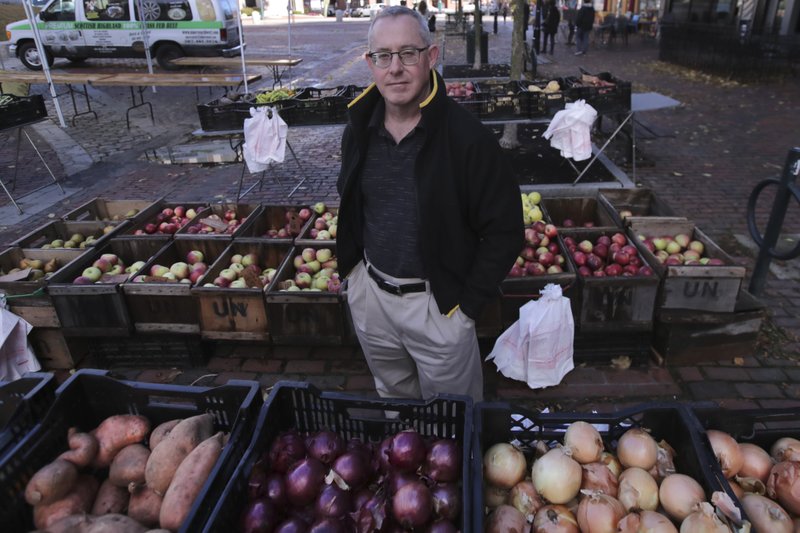 John Gold, self-employed graphics designer, poses at a farmer's market outside his office in Portland, Maine, Wednesday, Oct. 23, 2019. Gold has been covered by the Affordable Care Act since it started, plans on shopping for plans for 2020 again when the enrollment season starts Nov. 1. (AP Photo/Charles Krupa)

WASHINGTON -- More Americans are going without health insurance, and stable premiums plus greater choice next year under the Affordable Care Act aren't likely to reverse that.

As sign-up season starts today, the health care law has shown remarkable resiliency, but it has also fallen short of expectations.

During President Barack Obama's tenure, open enrollment involved a national campaign to get people signed up. The program's complexity was always a problem, and many lower-income people still don't understand that they can get financial help with premiums.

That can translate to several million uninsured people unaware that they qualify for help. An analysis Thursday from the consulting firm Avalere Health found that low-income residents in 96% of counties served by healthcare.gov can find a basic "bronze" plan at no cost to them, factoring in subsidies. Bronze plans are skimpy, but experts say it beats going uninsured.

Standard "silver" plans are available at no additional cost in 25% of counties, and people eligible for generous subsidies can find more robust "gold" plans for zero premium in 23% of counties, the study found.

But the Trump administration says it's not specifically advertising that. Early on, it slashed the Affordable Care Act ad budget. Officials say they're focused on providing a quality sign-up experience and keeping the healthcare.gov website running smoothly.

Democrats who once touted the health overhaul as a generational achievement now see it as a stepping stone, not the final word.

Presidential candidates Bernie Sanders and Elizabeth Warren would bring the 20 million people covered under the law into a new government-run system for all Americans. "It's time for the next step," says Warren.

For John Gold, a self-employed graphic designer from Maine, health care that's stable, affordable and comprehensive still feels more like a goal than a reality. He's been covered by the health care law since 2014.

"It's a great start, but it's not the be-all and end-all of health care," he said.

Health care "takes up too much of my budget, and it doesn't need to," explained Gold, who lives near Portland. "There are appointments my doctor suggests, that I turn down because it's going to cost me $300."

Gold's income fluctuates, and when he makes too much to qualify for subsidized premiums, he must pay full freight. He's in his 50s, so his monthly cost is higher, about $700. On top of that, the plan comes with a $4,000 deductible and an $8,000 out-of-pocket limit, potentially leaving him on the hook for a lot more.

Nonetheless, Gold said he hasn't looked at the cheaper alternative the Trump administration is touting, though it can cost up to 60% less. One reason is "short-term plans" don't have to cover pre-existing medical conditions.

With the economy strong, it's unusual for progress to falter on America's uninsured rate. Yet the Census Bureau reported that 27.5 million people were uninsured in 2018, an increase of nearly 1.9 million from 2017, and the first time the rate went up in a decade.

Caroline Pearson, a health insurance expert with NORC at the University of Chicago, a nonpartisan research organization, said she doesn't expect to see Affordable Care Act coverage gains in 2020.

"Premiums are still expensive for people who have other costs," said Pearson. "It's a challenging proposition unless you are getting a big subsidy or really need insurance."

Enrollment has been slowly eroding since President Donald Trump took office, from 12.2 million in 2017 to 11.4 million this year. The drop has come mainly in healthcare.gov states, where the federal government runs sign-up season. State-run insurance markets have held their own.

But Trump administration officials say they're doing just fine managing the health care law. They recently announced that premiums for a hypothetical 27-year-old choosing a standard plan will decline 4% on average in 2020 in healthcare.gov states.

Despite relatively good news on premiums, Trump's actions still cast a shadow over the law's future.

His administration is asking a federal appeals court in New Orleans to strike down the entire law as unconstitutional. The White House has released no plans to replace it.