What were they thinking 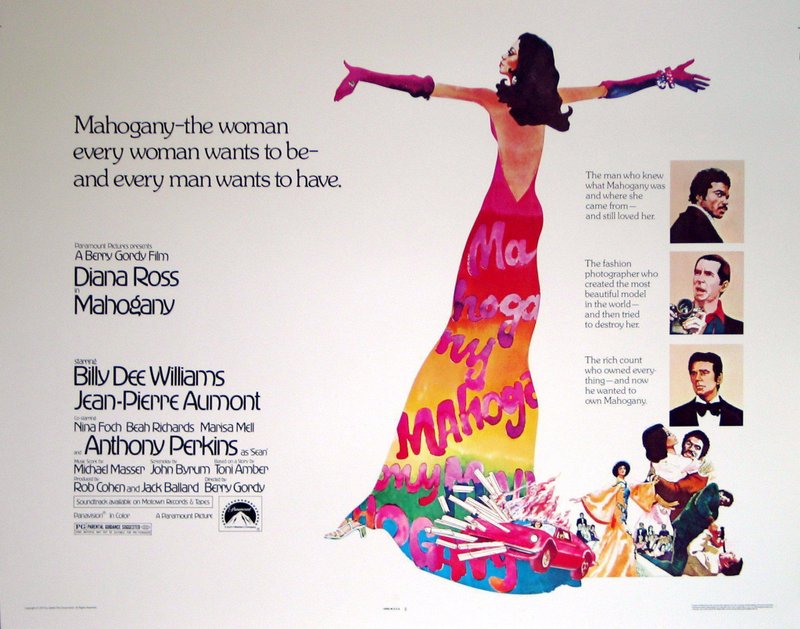 Diana Ross missed the mark by a mile in her second film, the Berry Gordy-directed Mahogany. This cliché-ridden melodrama about giving it all up for the man you love was enough to halt Ross’ film career.

"Success is nothing without someone you love to share it with." Remember those hoary words as you watch this dreadful melodrama disguised as socially relevant entertainment.

Mahogany, the second attempt by record mogul Berry Gordy to turn Diana Ross into a film superstar, is not a great film. It isn't even a good film. But it has achieved camp status.

Ross' first film, the biopic Lady Sings the Blues, directed by Sidney J. Furie, was a hell of a lot better. And don't get me started on The Wiz.

Gordy fired Mahogany's original director, Tony Richardson (Tom Jones), and directed the film himself. (IMDb lists a Jack Wormser as a co-director. So perhaps Gordy isn't the only culprit here.) Every cliché in the book was thrown in the screenplay. (By the way, Gordy never directed another film. Neither did Wormser.)

The plot is as old as Methuselah. Poor but plucky girl strives for a better life. Works hard, falls in love, takes her knocks, gets famous but finds that fame is not all that it is cracked up to be, especially when you can't enjoy it with the person you love. Yawn.

Tracy Chambers (Ross) is toiling away as a secretary to harridan of a boss Miss Evans (Nina Foch) at a swanky Chicago department store (Marshall Field & Co.?). At night she takes a course in fashion design so she can become a fashion designer.

She meets young black activist Brian Walker (Billy Dee Williams) who is running for Chicago city council. They eventually fall in love. He demands that she put her dreams aside and help him with his. And she does -- but not for long.

Famous fashion photog Sean McAvoy (Anthony Perkins) arrives to shoot some models for the store. He mistakes her for a model and takes an immediate liking to her. He eventually gets her to go to Rome where fame, fortune and a new name (Mahogany) await. He tries to (but can't) consummate their relationship as he is more than likely gay, which is never mentioned.

The supporting cast does have some old pros including Foch, Beah Richards, Jean-Pierre Aumont and last but not least, Perkins. He gets to play his patented creepy, crazy guy. (C'mon, you saw this coming.) But he doesn't dress up as his dead mother and go about trying to knife everyone. (That would have been fun.) His character comes to a bad end. Duh.

From IMDb: "Ross designed some of the costumes in the fashion show sequence herself." And those same clothes have to be seen to be believed. Pure '70s kitsch. I suspect some of the models wearing her designs were drag queens. That makes it a lot more fun. The photo montage of Mahogany's outfits in Rome is pure camp.

One positive note is the theme song, "Do You Know Where You're Going To." But it is repeated ad nauseam throughout the film.

And feminists beware: Tracy/Mahogany gives it all up for the man she loves. (Just as Joan did 40 years earlier.)

To be fair, I have to mention that Mahogany was a first in several respects. It was about a black woman who becomes a fashion icon. Never saw that before. And it was made by a black filmmaker, which opened the door to more black filmmakers. Too bad it wasn't a better film.

"The role of Tracy Chambers was originally written for Liza Minnelli but was eventually offered to Diana Ross."

"The theme song 'Do You Know Where You're Going To' was at first considered not acceptable "because of quality standards" for being an Oscar contender, but Berry Gordy successfully lobbied the Academy into nominating it." Actually, it was not written for the film, and that is now an Oscar rule for "Best Song" category.

Print Headline: What were they thinking